The nitrate ion. The net charge of the whole ion is 1−.

The nitrate ion is a polyatomic ion with the molecular formula NO−
3 and a molecular mass of 62.0049 g/mol. It is the conjugate base of nitric acid, consisting of one central nitrogen atom surrounded by three identical oxygen atoms in a trigonal planar arrangement. The nitrate ion carries a formal charge of negative one, where each oxygen carries a −2⁄3 charge whereas the nitrogen carries a +1 charge, and is commonly used as an example of resonance. Like the isoelectronic carbonate ion, the nitrate ion can be represented by resonance structures:

In organic chemistry a nitrate (not to be confused with nitro) is a functional group with general chemical formula RONO2 where R stands for any organic residue. They are the esters of nitric acid and alcohols formed by nitroxylation. Examples are methyl nitrate formed by reaction of methanol and nitric acid,[1] the nitrate of tartaric acid,[2] and the inaccurately-named nitroglycerin (which is actually an organic nitrate compound, not a nitro compound).

Nitrate should not be confused with nitrite (NO−
2), the salts of nitrous acid. Organic compounds containing the nitro functional group (which has the same formula and structure as the nitrate ion save that one of the O− atoms is replaced by the group) are known as nitro compounds. Examples of familiar organic nitro compounds are nitromethane and trinitrotoluene (TNT).

Nitrate of itself is not poisonous to animals. However nitrate toxicosis can occur through enterohepatic metabolism of nitrate to nitrite being an intermediate.[3] Nitrites oxidize the iron atoms in hemoglobin from ferrous iron (2+) to ferric iron (3+), rendering it unable to carry oxygen.[4] This process can lead to generalized lack of oxygen in organ tissue and a dangerous condition called methemoglobinemia. Although nitrite converts to ammonia, if there is more nitrite than can be converted, the animal slowly suffers from a lack of oxygen.[5]

Humans are subject to nitrate toxicity, with infants being particularly especially vulnerable to methemoglobinemia due to nitrate metabolizing triglycerides present at higher concentrations than at other stages of development. Methemoglobinemia in infants is known as blue baby syndrome. Although nitrates in drinking water were once though to be a contributing factor, there are now significant scientific doubts as to whether there is a causal link.[6][7] Blue baby syndrome is now thought to be the product of a number of factors, which can include any factor which causes gastric upset, such as diarrhoeal infection, protein intolerance, heavy metal toxicity etc., with nitrates playing a minor role. Nitrates, if a factor in a specific case, would most often be ingested by infants in high nitrate drinking water. However, nitrate exposure may also occur if eating, for instance, vegetables containing high levels of nitrate. Lettuce may contain elevated nitrate under growth conditions such as reduced sunlight, undersupply of the essential micronutrients molybdenum (Mo) and iron (Fe), or high concentrations of nitrate due to reduced assimilation of nitrate in the plant. High levels of nitrate fertilization also contribute to elevated levels of nitrate in the harvested plant.[8]

Some adults can be more susceptible to the effects of nitrate than others. The methemoglobin reductase enzyme may be under-produced or absent in certain people that have an inherited mutation.[9] Such individuals cannot break down methemoglobin as rapidly as those that do have the enzyme, leading to increased circulating levels of methemoglobin (the implication being that their blood is not as oxygen-rich). Those with insufficient stomach acid[9] (including some vegetarians and vegans) may also be at risk. It is the increased consumption of green, leafy vegetables that typically accompany these types of diets may lead to increased nitrate intake. A wide variety of medical conditions, including food allergies, asthma,[10] hepatitis, and gallstones may be linked with low stomach acid; these individuals may also be highly sensitive to the effects of nitrate. On the contrary, For half a century, inorganic nitrate has been associated with negative health effects, but more recently, evidence of the contrary has mounted. In the 1990s, a research group at Karolinska Institutet demonstrated how the body can convert nitrate to NO, a molecule involved in many important bodily functions, such as blood pressure regulation, the immune defence and cell metabolism. These compounds can ameliorate mitochondrial dysfunction related diseases, The results, which are published in Cell Metabolism, are of sports-physiological interest, as they show that nitrate reduces oxygen consumption during physical exercise; however, they are also of potential significance to diseases involving mitochondrial dysfunction, such as diabetes and cardiovascular disease.,[11]

Methemoglobinemia can be treated with methylene blue, which reduces ferric iron (3+) in affected blood cells back to ferrous iron (2+).[citation needed] 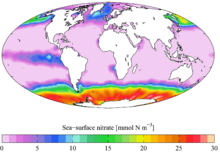 In freshwater or estuarine systems close to land, nitrate can reach high levels that can potentially cause the death of fish. While nitrate is much less toxic than ammonia or nitrite,[12] levels over 30 ppm of nitrate can inhibit growth, impair the immune system and cause stress in some aquatic species.[13] However, in light of inherent problems with past protocols on acute nitrate toxicity experiments, the extent of nitrate toxicity has been the subject of recent debate.[14]

In most cases of excess nitrate concentrations in aquatic systems, the primary source is surface runoff from agricultural or landscaped areas that have received excess nitrate fertilizer. This is called eutrophication and can lead to algae blooms. As well as leading to water anoxia and dead zones, these blooms may cause other changes to ecosystem function, favouring some groups of organisms over others. As a consequence, as nitrate forms a component of total dissolved solids, they are widely used as an indicator of water quality.

Nitrate also is a by-product of septic systems. To be specific, it is a naturally occurring chemical that is left after the breakdown or decomposition of animal or human waste. Water quality may also be affected through ground water resources that have a high number of septic systems in a watershed. Septics leach down into ground water resources or aquifers and supply nearby bodies of water. Lakes that rely on ground water are often affected by nitrification through this process.

Nitrate in drinking water at levels above the national standard poses an immediate threat to young children. Excessive levels can result in a condition known as "blue baby syndrome". If untreated, the condition can be fatal. Boiling water contaminated with nitrate increases the nitrate concentration and the potential risk.

Nitrate poisoning is a concern for cattle producers primarily, but also for other ruminant growers. Nitrate is naturally consumed by growing plants; however when growth is interrupted, the roots of plants will continue to provide nitrate from soil, and unless new plant growth occurs, the nitrate will accumulate. Thus, harvesting after nitrate buildup results in a crop that is high in nitrates. Factors that can cause nitrate buildup in plants are frost, hail damage, drought, hot dry winds, pesticide damage, herbicide damage and any other plant stunting environmental causes.[15]

Symptoms of nitrate poisoning include increased heart rate and respiration; in advanced cases blood and tissue may turn a blue or brown color. Feed can be tested for nitrate; treatment consists of supplementing or substituting existing supplies with lower nitrate material. Safe levels of nitrate for various types of livestock are as follows:[16]

The values above are on a dry (moisture free) basis.