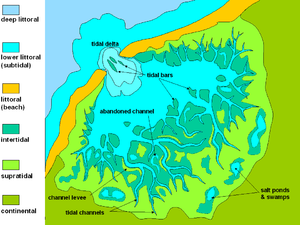 General sketch-map of a tidal plain, showing the typical tripartition in supratidal, intertidal and subtidal zones. The most apparent character of the area is the development of tidal channels, affecting mainly the intertidal zone. In this case, the tidal flat is protected seaward by a beach barrier, but in many cases (low-energy waves and longshore currents) the tidal flats may directly pass into a shallow marine environment.

Mudflats or mud flats, also known as tidal flats, are coastal wetlands that form when mud is deposited by tides or rivers. They are found in sheltered areas such as bays, bayous, lagoons, and estuaries. Mudflats may be viewed geologically as exposed layers of bay mud, resulting from deposition of estuarine silts, clays and marine animal detritus. Most of the sediment within a mudflat is within the intertidal zone, and thus the flat is submerged and exposed approximately twice daily.

In the past tidal flats were considered unhealthy, economically unimportant areas and were often dredged and developed into agricultural land[1]. Several especially shallow mudflat areas, such as the Wadden Sea, are now popular among those practising the sport of mudflat hiking.

Tidal flats, along with intertidal salt marshes and mangrove forests, are important ecosystems.[2] They usually support a large population of wildlife, although levels of biodiversity are not particularly high. They are often of vital importance to migratory birds, as well as certain species of crabs[3], mollusks and fish.[4] In the United Kingdom mudflats have been classified as a Biodiversity Action Plan priority habitat.

The maintenance of mudflats is important in preventing coastal erosion. However, mudflats worldwide are under threat from predicted sea level rises, land claims for development, dredging due to shipping purposes, and chemical pollution.

A panorama of the tidal flat at Cape Henlopen State Park, Delaware, at low tide in January 2009.