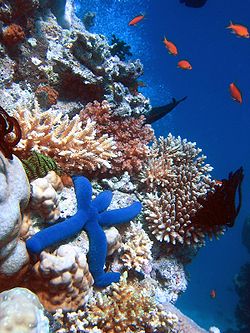 Coral reefs have a great amount of biodiversity.

Coral reefs are the epicenter for immense amounts of biodiversity, and are a key player in the survival of an entire ecosystem. They provide various marine animals with food, protection, and shelter which keep generations of species alive.[1] Furthermore, coral reefs are an integral part of sustaining human life through serving as a food source (i.e. fish, mollusks, etc) as well as a marine space for eco-tourism which provides economic benefits. [2]

Unfortunately, because of human impact of coral reefs, these ecosystems are becoming increasingly degraded and in need of conservation. The biggest threats include "overfishing, destructive fishing practices, and sedimentation and pollution from land-based sources."[3] This in conjunction with increased carbon in oceans, coral bleaching, and diseases, there are no pristine reefs anywhere in the world.[4] In fact, up to 88% of coral reefs in Southeast Asia are now threatened, with 50% of those reefs at either "high" or "very high" risk of disappearing which directly effects biodiversity and survival of species dependent on coral.[5]

This is especially harmful to island nations such as Samoa, Indonesia, and the Philippines because many people depend on the coral reef ecosystems to feed their families and to make a living. However, many fisherman are unable to catch as many fish as they used to, so they are increasingly using cyanide and dynamite in fishing, which further degrades the coral reef ecosystem.[6] This perpetuation of bad habits simply leads to the further decline of coral reefs and therefore perpetuating the problem. One solution to stopping this cycle is to educate the local community about why conservation of marine spaces that include coral reefs is important.[7] Once the local communities understand the personal stakes at risk then they will actually fight to preserve the reefs. Conserving coral reefs has many economic, social, and ecological benefits, not only for the people who live on these islands, but for people throughout the world as well.

The deterioration of coral reefs is mainly linked to human activities – 88% of coral reefs are threatened through various reasons as listed above, including excessive amounts of CO2 (Carbon Dioxide) emissions [8]. Oceans absorb approximately 1/3 of the CO2 produced by humans, which has detrimental effects on the marine environment [9]. The increasing levels of CO2 in oceans change the seawater chemistry by decreasing the level of pH. This process is also known as acidification. Acidification negatively affects the carbonate buffering system and drops the carbonate saturation by 30%, which results in a decrease in reef calcification [10]. Reductions in calcification have negative implications on calcifiers, such as corals and shellfish. Some examples include diminishing coral resilience from bleaching, decreasing organisms’ ability to fight off predators, inhibiting their potential to compete for food, and altering behavior patterns [11]. When the bottom of the food web declines tremendously due to acidification, the food web and the whole marine conservation effort is jeopardized. Although humans cause the greatest threat to our marine environment, humans also have the ability to create effective management plans that will be the key to successful marine conservation. Although the most widely known conservation tool is the MPA, one of the best marine conservation tools simply stems from smarter individualist choices we make in efforts to reduce CO2 emissions on a daily basis.

Another focus of conservationists is on curtailing human activities that are detrimental to either marine ecosystems or species through policy, techniques such as fishing quotas, like those set up by the Northwest Atlantic Fisheries Organization, or laws such as those listed below. Recognizing the economics involved in human use of marine ecosystems is key, as is education of the public about conservation issues. This includes educating tourists that come to an area that might not be familiar of certain rules and regulations regarding the marine habitat. One example of this is a project called Green Fins that uses the SCUBA diving industry to educate the public based in SE Asia. This project, implemented by UNEP, encourages scuba diving operators to educate the public they teach to dive about the importance of marine conservation and encourage them to dive in an environmentally friendly manner that does not damage coral reefs or associated marine ecosystems.

Marine conservation technologies are devices used to protect endangered and threatened marine organisms and/or habitat. Marine conservation technologies are innovative and revolutionary because they reduce bycatch, increase the survivorship and health of marine life and habitat, and benefit fishermen who depend on the resources for profit. Examples of technologies include marine protected areas (MPAs), turtle excluder devices (TEDs), and radio-frequency identification (RFID). Commercial practicality plays in important role in the success of marine conservation because it is necessary to cater to the needs of fishermen while also protecting marine life. [12]

Turtle excluder devices for example (TEDs) remove a major threat to turtles in their marine environment. Many sea turtles are accidentally captured, injured or killed by fishing. In response to this threat the National Oceanic and Atmospheric Administration (NOAA)worked with the shrimp trawling industry to create the TEDs devices. [13] By working with the industry they insured the commercial viability of the devices. Basically, a TED is a series of bars that is placed at the top or bottom of a trawl net, fitting the bars into the "neck" of the shrimp trawl and acting as a filter to ensure that only small animals may pass through. The shrimp will be caught but larger animals such as marine turtles that become caught by the trawler will be rejected by the filter function of the bars. [14]

International laws and treaties related to marine conservation include the 1966 Convention on Fishing and Conservation of Living Resources of the High Seas. United States laws related to marine conservation include the 1972 Marine Mammal Protection Act, as well as the 1972 Marine Protection, Research and Sanctuaries Act which established the National Marine Sanctuaries program.

In 2010, the Scottish Parliament enacted new legislation for the protection of marine life with the Marine (Scotland) Act 2010. The provisions in the Act include: Marine planning, Marine licensing, marine conservation, seal conservation, and enforcement. 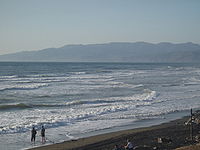 The shore of the Pacific Ocean in San Francisco, California.

On a regional level, PERSGA- the Regional Organization for the Conservation of the Environment of the Red Sea and the Gulf of Aden, is a regional entity serves as the secretariat for the Jeddah Convention-1982, one of the first regional marine agreements. PERSGA Member States are: Djibouti, Egypt, Jordan, Saudi Arabia, Somalia, Sudan and Yemen. 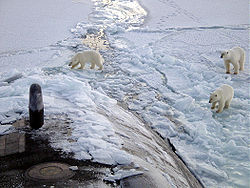 Polar bears on the sea ice of the Arctic Ocean, near the north pole.