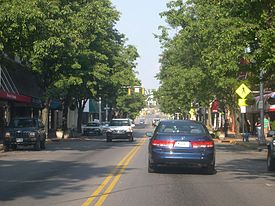 The 2010 U.S. Census revealed a population of 17,835[3]. It is the twin city of Bristol, Tennessee, just across the state line, which runs down the middle of its main street, State Street. The Bureau of Economic Analysis combines the city of Bristol, Virginia with Washington County for statistical purposes. Bristol is a principal city of Kingsport–Bristol–Bristol, TN-VA Metropolitan Statistical Area, which is a component of the Johnson City–Kingsport–Bristol, TN-VA Combined Statistical Area – commonly known as the "Tri-Cities" region.

Originally named Goodson, it was renamed to Bristol (after Bristol, England) in 1890.

There were 7,678 households out of which 24.8% had children under the age of 18 living with them, 46.1% were married couples living together, 13.6% had a female householder with no husband present, and 37.5% were non-families. 34.3% of all households were made up of individuals and 17.4% had someone living alone who was 65 years of age or older. The average household size was 2.18 and the average family size was 2.78.

Despite its relatively small size, Bristol, Virginia boasts one of the most advanced broadband networks in the country. Bristol Virginia Utilities (BVU) started planning a fiber optic deployment in the city in the late 1990s. By the year 2001, BVU had been granted approval by the City Council of Bristol for a full deployment of a Fiber to the premises (FTTP or FTTU, fiber to the user) project. This project was to offer competition to local incumbents and provide broadband Internet, cable TV, and telephone service to the residents of Bristol. This deployment was one of the first of its kind in the United States and was widely watched by the telecommunications industry. A system known as Passive optical network (PON) was successfully deployed to over 6000 customers in a matter of 2 years.

Today, Bristol Virginia is still one of only a few FTTP deployments in the country with a significant number of customers online. Bristol’s twin, Bristol, Tennessee, is also deploying an FTTP system similar to its neighbor across the state line.

Bristol is considered to be the "Birthplace of Country Music" according to a resolution passed by the US Congress in 1998 for its contributions to early country music recordings and influence.

In 1927 Ralph Peer of Victor Records began recording local musicians in Bristol to attempt to capture the local sound of traditional 'folk' music of the region.

One of these local sounds was created by the Carter family. The Carter Family got their start on July 31, 1927, when A.P. Carter and his family journeyed from Maces Spring, Virginia, to Bristol, Tennessee, to audition for record producer Ralph Peer who was seeking new talent for the relatively embryonic recording industry. They received $50 for each song they recorded.

Since 1994 the Birthplace of Country Music Alliance has promoted the city as a destination to learn about the history of the region and its role in the creation of an entire music genre. Currently, the Alliance is organizing the building of a new Cultural Heritage Center to help educate the public about the history of country music in the region.

Former NASCAR driver Kelly Denton is from the city.