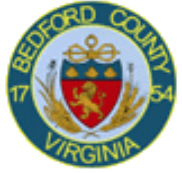 Bedford County is a county located in the of the . As of the 2000 census, the population was 60,371. Its is the city BedfordGR|6 and is part of the Lynchburg Metropolitan Statistical Area. As an , Bedford is not a part of Bedford County, despite being the county seat.