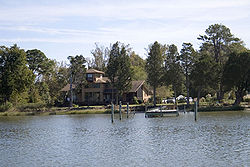 Mathews County is a county on the Middle Peninsula of the Hampton Roads metropolitan area of the U.S. state of Virginia. As of the 2010 Census, the population was 8,978[1]. Its county seat is Mathews[2].

During Virginia's Colonial Era, the area which later became Mathews County was a portion of Gloucester County. The small town at Mathews Court House (also known as simply "Mathews") was originally named Westville, and was established around 1700. In 1691, the Virginia General Assembly had directed that each county designate an official port-of-entry. Westville was located along Put-in Creek, a waterway which is a tidal tributary of Virginia's East River, feeding into Mobjack Bay, itself a tributary of the Chesapeake Bay. [3]

In 1776, Virginia's last Royal Governor, Lord Dunmore, left Virginia after being driven to Gwynn's Island by General Andrew Lewis and the Continental Army during the American Revolutionary War. About 10 years after Virginia gained its independence from Great Britain, Mathews County was established in 1791 from part of Gloucester County. The county was named for Brigadier General Thomas Mathews, then speaker of the House of Delegates of the General Assembly of Virginia. Westville was designated at the county seat (later become known variously as Mathews Court House or simply Mathews). [4]

Mathews County is perhaps best known for its miles of waterfront sites, as well as its prominent location on the Chesapeake Bay. Surrounded almost completely by water, it is bordered by Middlesex County to the north, separated by the Piankatank River and Gloucester County to the west. The southern side of the county borders Mobjack Bay. 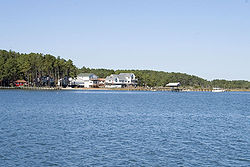 Tourism, leisure, and fishing industries are the major sources of employment. The county is reputed to be one of the few remaining in Virginia with no traffic lights. Along State Route 223 at Gwynn's Island, there is a small drawbridge which is manned 24 hours daily. [6]

Prominent among Mathews County tourism and leisure locations is Gwynn's Island, a popular spot for recreational boating and sailing. It is located where the Piankatank River feeds into the Chesapeake Bay. [7] Nearby is the off-shore location of the historic New Point Comfort Light.

Mathews County hosts the annual Tour De Chesapeake, (due to its lack of hills except for the north section of the county near the Mathews-Gloucester border). The bicycling event is a benefit for the Chesapeake Bay Foundation. [8] The community also sponsors Mathews Market Days, featuring local artists such as P. Buckley Moss.

In Susan, Virginia, which is in Matthews County is where the DIY Blog Cabin 2011 is located. This event has drawn more attention to the county.

Despite lackluster football and basketball teams, Mathews High School is known for success in several sports including Boy's and Girl's Crew Teams, Boys Cross Country, Volleyball, Wrestling, Softball, and Track and Field. The wrestling team won the 1990 and 1991 state championships, boys track won the 1969 and 1986 state championships, and baseball won the state title in 2004.[9]