Fairfax County is a county in Northern , in the . , the estimated population of the county was 1,077,000, [ [http://www.fairfaxcounty.gov/dmb/adopted/FY2008/FY08_Adopted_Budget_Facts.html Fairfax County Adopted Budget Facts] . Retrieved January 18, 2008] making it by far the most populous jurisdiction in the Commonwealth of Virginia, and is the most populous jurisdiction in the . Fairfax was the first county to reach a six figure median household income and has the second highest median household income of any jurisdiction in the United States after neighboring .

The oldest settlements in Fairfax County were located along the .
settled in Fairfax County and built his home, Mount Vernon facing the river. , the home of is located nearby. Modern is partly located on the estate of Belvoir Manor, built along the Potomac by William Fairfax in 1741. , the only member of the British nobility ever to reside in the colonies, lived at Belvoir before he moved to the . The Belvoir mansion and several of its outbuildings were destroyed by fire immediately after the Revolutionary War in 1783, and George Washington noted the plantation complex gradually deteriorated into ruins. [ [http://www.belvoir.army.mil/history.asp?id=Antecedents Historic Fort Belvoir ] ]

Located near Washington, D.C., Fairfax County was an important region in the Civil War. The or Ox Hill, during the same campaign as the , was fought within the county; Bull Run straddles the border between Fairfax and Prince William County. For most of the Civil War, Union troops occupied the county, though the population remained sympathetic to the Confederacy.

The growth of the Federal Government in the years during and after World War II spurred rapid growth in the county. As a result, the once rural county began to become increasingly suburban. Other large businesses continued to settle in Fairfax County and the opening of spurred the rise of itself. The technology boom and a steady government-driven economy also created rapid growth and an increasingly growing and diverse population. The economy has also made Fairfax County one of the wealthiest counties in the nation.

Eleven square miles of the county are known to be underlain with natural . [Citation
last =
first =
author-link =
last2 =
first2 =
author2-link =
title =Naturally Occurring Asbestos in Fairfax County
date =
year =
url =http://www.fairfaxcounty.gov/hd/asb/
accessdate =2007-07-16] Much of the asbestos is known to emanate from fibrous or . Approximately 20 years ago, when the threat was discovered, the county established laws to monitor air quality at construction sites, control soil taken from affected areas, and require freshly developed sites to lay convert|6|in|mm of clean, stable material over the ground. [Citation
last =Raloff
first =Janet
author-link =
last2 =
first2 =
author2-link =
title =Dirty Little Secret
newspaper =Science News
pages =
year =2006
date =July 8
url =http://www.sciencenews.org/articles/20060708/bob9.asp ] For instance, during the construction of Centreville High School a large amount of asbestos-laded soil was removed and then trucked to Vienna for the construction of the I-66/Nutley Street interchange. Fill dirt then had to be trucked in to make the site level. s can be found in widespread areas of the county east of Interstate 95, mostly in the Lee and Mount Vernon Districts. These clays contribute to soil instability, leading to significant construction challenges for builders. [Citation | url =http://www.fairfaxcounty.gov/dpwes/publications/marineclay.htm |title=Overcoming Problems with Marine Clays]

Judged by household median income, Fairfax County is among the highest-income counties in the country and was first on that list for many years. However, in the 2000 census it was overtaken by . According to US Census Bureau estimates for 2005, it had the second-highest median household income behind neighboring Loudoun County, Va., at $94,610. In 2007 Fairfax County reclaimed its position as the richest county in America, in addition to becoming the first jurisdiction in American history to have a median household income in excess of $100,000, as stated by the U.S. Census Bureau's latest report. [http://www.examiner.com/a-905204~Fairfax_County_s_median_income_breaks_six_figure_mark__tops_nation.html] In 2008, Loudoun County reclaimed its first position, with Fairfax County a close second (however, the U.S. Census Bureau notes that the difference is statistically insignificant).

The county is served by the system, to which the county government allocates 52.2% of its fiscal budget. [ [http://www.fairfaxcounty.gov/dmb/advertised/FY2007/FY07_advertised_citizens_guide.pdf FY 2007 Advertised Budget Plan] ] Including state and federal government contributions, along with citizen and corporate contributions, this brings the 2008 fiscal budget for the school system to $2.2 billion. [ [http://www.fcps.edu/fs/budget/ Budget Services - Fairfax County Public Schools] ] The school system has estimated that, based on the 2008 fiscal year budget, the county will be spending $13,407 on each student. [ [http://www.fcps.edu/statis.htm FCPS statistics] ]

The Fairfax County Public School system contains the , a Virginia Governor's School. TJHSST consistently ranks at or near the top of all United States high schools due to the extraordinary number of National Merit Semi-Finalists and Finalists, the high average SAT scores of its students, and the number of students who annually perform nationally recognized research in the sciences and engineering.

is located just outside Fairfax City, near the geographic center of Fairfax County. serves Fairfax County with campuses in Annandale and Springfield and a center in Reston which is a satellite branch of the Loudoun campus. 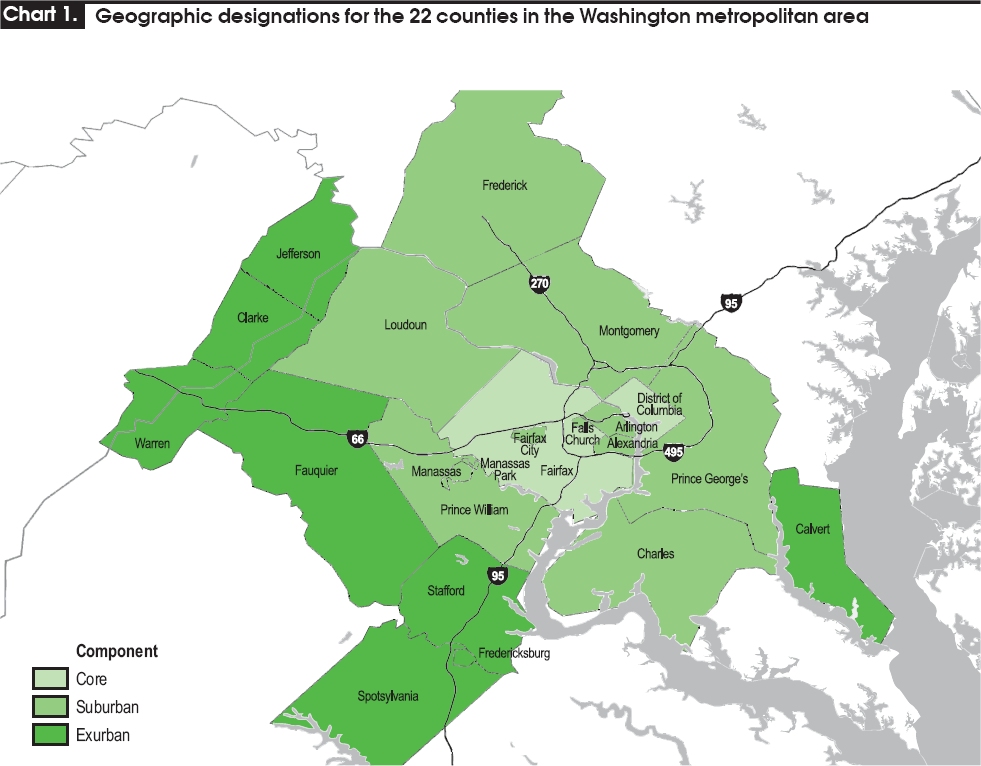 thumb|right|"Time" magazine columnist Justin Fox in 2007 called Fairfax County "one of the great economic success stories of our time." A U.S. Department of Labor study published in 2007 described Fairfax County as the second "economic pillar" of the Washington-area economy along with the District of Columbia.Fairfax County is, along with Washington, a core employment jurisdiction of the Washington Metropolitan Area. The economy of Fairfax County is a robust service economy. Many residents work for the government or for contractors of the Federal Government. Defense contractors in particular are prominent. The government is the largest employer with in southern Fairfax being the county's single largest employer.

The top five largest private employers are the , , , SAIC () and .Fact|date=October 2008 Fairfax County also is home to several large companies such as CSC (formerly ), , , , and . The county has seven company headquarters, more than the rest of Northern Virginia or the neighboring state of Maryland, and nearly as many as the state capital Richmond. and CSC both announced in 2007 that they would relocate their corporate headquarters to Fairfax County from and , respectively.

The economy of the county is supported by the , which provides a wide array of services and information designed to promote Fairfax County as a leading business and technology center. The FCEDA also runs a capital attraction program to link entrepreneurs and start-up firms with venture capitalists and angel investors. Another program assists small, minority- and woman-owned businesses. The FCEDA has marketing offices in San Francisco, Bangalore, Frankfurt, London, Seoul and Tel Aviv. [ [http://www.FairfaxCountyEDA.org Fairfax County Economic Development Authority :: Fairfax County, Virginia - The Best Place to Do Business ] ]

The average weekly wage in Fairfax County during the first quarter of 2005 was $1,181.

As of the 2002 Economic Census, Fairfax County has the largest professional, scientific, & technical service sector in the Washington, D.C. area in terms of the number of business establishments; total sales, shipments, and receipts; payrolls; and number of employees, [ [http://factfinder.census.gov/servlet/SAFFEconFacts?_event=&geo_id=05000US51059&_geoContext=01000US%7C04000US51%7C05000US51059&_street=&_county=Fairfax+County&_cityTown=Fairfax+County|Fairfax County, Virginia – Economic Fact Sheet – American FactFinder] ] exceeding the next largest, Washington, D.C., by roughly a quarter overall, and doubling neighboring Montgomery County.

is Virginia's largest office market and one of the leading business centers in the nation with convert|25700000|sqft|m2 of office space. [ [http://www.fairfaxcountyeda.org/re_tysons.htm Doing Business in Fairfax County Commercial Real Estate] ] Tysons Corner is currently the country's 12th largest business district, and is expected to grow substantially in the years to come. [ [http://www.tysonstunnel.com/tt_who_letter.htm Tysons Tunnel ] ] The county's total office space inventory totaled convert|105200000|sqft|m2 at year-end 2006, which is about the size of . [ [http://www.washingtonpost.com/wp-dyn/content/custom/2005/11/10/CU2005111001553.html D.C. Area Real Estate (washingtonpost.com) ] ] [ [http://www.tenantwise.com/reports/032002wtc.asp TenantWise : Manhattan Market Overview : March 2002 ] ] Every weekday, Tysons Corner has over 100,000 workers from around the region and 50,000 shoppers from the region and throughout the state. [ [http://www.virginiabusiness.com/magazine/yr2003/jul03/fairfax.shtml Virginia Business Online: Virginia’s 800-pound gorilla ] ] and are located here.

The annual "" festival is held in June at the Fairfax County Government Center in Fairfax City.

features a performing arts center situated outside the town of Vienna.

Several major highways run through Fairfax County, including the Capital Beltway (Interstate 495), Interstate 66, Interstate 95, and Interstate 395. The connects Fairfax to Montgomery County, Maryland. The , , and are also major arteries. Other notable roads include Braddock Road, Old Keene Mill Road, , State Routes 7, 28, and 123, and US Routes 1, 29, and 50.

Northern Virginia, includingFairfax County, is the third worstcongested traffic area in thenation, in terms of percentage ofcongested roadways and timespent in traffic. Of the lane milesin the region, 44 percent arerated “F” or worst for congestion.Northern Virginia residents spendan average of 46 hours a yearstuck in traffic.

lies partly within Fairfax County and provides most air service to the county. Fairfax is also served by two other airports in the Washington area, and .

, in neighboring , is also used for regional cargo and private jet service.

Fairfax County contracts its bus service called the to . It is also served by 's metrobus service. Fairfax County is served by the trains. The Orange, Blue, Yellow and the planned Silver lines all serve Fairfax County. In addition, VRE (Virginia Railway Express) provides commuter rail service with stations in Lorton and .

The county maintains many miles of bike trails running through parks, adjacent to roads and through towns such as Vienna and Herndon. The runs through Fairfax County, offering one of the region's best, and safest, routes for recreational walking and biking.

However, compared to other regions of the Washington area, Fairfax County has a dearth of designated for cyclists wishing to commute in the region. In fact, there is no known map of the county that directs cyclists to the best roads to traverse. [ [http://www.fabb-bikes.org/goals.html Fairfax Advocates for Better Bicycling (FABB) ] ] A recent report includes the lack of bike lanes or parallel residential streets to major thoroughfares as a major reason for low numbers of bicycle commuters in northern Virginia. [ [http://www.fhiplan.com/novabike/ Northern Virginia Bike Study ] ]

The [http://www.fairfaxcounty.gov/parks/cct/cctfaq.htm Fairfax Cross County Trail] runs from Great Falls National Park in the northern end of the county to Occoquan Regional Park in the southern end. Consisting of mostly dirt paths and short asphalt sections, the trail is used mostly by recreational mountain bikers, hikers, and horse riders.

In addition to the , Fairfax County is part of the .

The [http://www.restonzoo.com/ Reston Zoo] is near , in Fairfax County.

Towns, independent cities, and other localities

Other communities within Fairfax County are s; Virginia law prohibits the creation of any new municipalities within any county with a of over 1,000 per square mile (which currently only affects Fairfax and Arlington Counties in Northern Virginia, and recently outside Richmond). As of the 2000 census the thirteen largest communities of Fairfax County are all unincorporated CDPs, the largest of which are Burke, Reston, and Annandale, each with a population exceeding 50,000. (The largest incorporated place in the county is the town of Herndon, its fourteenth-largest community.)

The following localities within Fairfax County are identified by the U.S. Census Bureau as (unincorporated) Census-Designated Places: