/pəˈkoʊsən/) is an independent city located on the Virginia Peninsula, in the Hampton Roads metropolitan area of the U.S. state of Virginia. The population was 12,150 according to the 2010 Census[3]. The Bureau of Economic Analysis combines the city of Poquoson with surrounding York county for statistical purposes.

Poquoson, which was formerly part of York County, became an incorporated town in 1952 and an independent city in 1975. (In Virginia, municipalities incorporated as independent cities are not part of any county.) However, the ties remain close. Over 30 years after Poquoson became a politically independent entity, some constitutional services such as the courts, sheriff and jail continue to be shared with neighboring York County.

Poquoson is one of the oldest continuously named cities in Virginia. It is also one of the few to retain a name which derived from the Native Americans who inhabited the area before colonization by the English began in the 17th century.

The name of the city is a Native American word which roughly translates to "great marsh" or "flat land." The term pocosin, with its varied spellings, was a term used by the area's inhabitants to describe a low, marshy, woody place covered by water in the winter, but is dry in the summer. These Native Americans were Algonquians, a tribal group affiliated through the Powhatan Confederacy, and were hostile to the early settlers. A petition to have the name of the parish and river changed was an attempt to rid the language of all vestiges of Indian terms. However, "poquoson" has survived through the centuries and has become a proper noun used to designate the present city.

The current city is a remnant of a larger area known from the first days of its settlement in the early 17th century by English colonists as the New Poquoson Parish of the Church of England. In the colonial times before separation of church and state and freedom of religion were established in Virginia and the United States, the church parish boundaries and governmental ones were often the same. In addition to the current city of Poquoson, New Poquoson Parish originally included the areas in York County known today as Poquoson, Tabb, Grafton, Dare and Seaford. This land was opened for settlement in the year 1628 and was occupied by people from the English settlement of the Virginia Colony established at Kecoughtan in 1610 by Sir Thomas Gates which eventually became part of the current City of Hampton. The first reference to the city is believed to be in Colonial records of a land grant to Christopher Calthorpe in 1631 by a court in what became the former Elizabeth City County (which consolidated with the Town of Phoebus and the City of Hampton in 1952, assuming the latter's name, and becoming a single large independent city).[4]

In 1634, the eight original shires of Virginia were created. Poquoson was located in Charles River Shire. The name was changed to York County in 1642-43. The York River was known earlier as the Charles River, and its name was also changed about the same time.

Poquoson grew as a close-knit community of York County for the next 300 years. During the American Revolutionary War, independence as won at nearby Yorktown, a major tourist attraction of the Historic Triangle of Colonial Virginia.

Poquoson became an incorporated town in 1952, as the citizens of the community were afraid their high school would be moved to a faster growing region of York County. The town became an independent city in 1975 in order to maintain this status. The change from incorporated town to independent city status also effectively protected Poquoson from potential annexation suits by the adjacent City of Hampton.

The changes to incorporated town and independent city were part of a wave of municipal changes in southeastern Virginia in the third quarter of the 20th century. Although Poquoson is one of the smaller of 10 independent cities extant in the Hampton Roads region in the 21st century, it is not unique in the area as a city having large areas of undeveloped and protected wetlands.

The Poquoson City Council is composed of seven members who are elected by the voters and serve four year terms. Elections are held in even numbered years on the first Tuesday in November. Any Poquoson resident who is at least 18 years of age, is a United States citizen and a resident of Virginia is eligible to be a candidate for election.

The City is divided into three precincts with each precinct having two council representatives. Voters cast their ballot for one candidate from each precinct. One representative is elected at large and serves as City Mayor. Persons elected to City Council take office on the first day of January following the election.

City Council meetings are held on the second and fourth Monday of each month at 7:00 p.m. in the Council Chambers located at 500 City Hall Avenue and are open to the public. The meetings are televised live on Cable Channel 5, and are rebroadcast on Wednesday, 10 a.m. and Thursday, 7 p.m., following the meeting.

Agenda items for City Council meetings are determined by the City Council, City Manager, City Clerk, and other staff members. Individuals wanting information about the agenda should contact the office of the City Clerk (868-3000).

Any individuals may address Council during the "Audience for Visitors" portion of the Council meeting. Comments are not limited at this time. [5] The City's school board is appointed by the City Council.

Over 30 years after Poquoson became an independent city from York County, some constitutional services such as the courts, sheriff and jail continue to be shared with neighboring York County.[6]

Poquoson's daily newspaper is the Daily Press. Other papers include the Port Folio Weekly, the New Journal and Guide, The Poquoson Post, and the Hampton Roads Business Journal.

The city is a peninsula containing twenty square miles and is located between the Poquoson River on the north, Back River and Wythe Creek (the Old Poquoson River) on the south, the Chesapeake Bay on the east, and York County on the west. The city also shares a border with the City of Hampton and a water boundary across Chesapeake Bay with Northampton County.

Poquoson's mild four season climate means outdoor activities can be enjoyed year round. The weather in Poquoson is temperate and seasonal. Summers are hot and humid with cool evenings. The mean annual temperature is 60 °F (16 °C), with an average annual snowfall of 6 inches and an average annual rainfall of 47 inches (1,200 mm). No measurable snow fell in 1999. The wettest seasons are the spring and summer, although rainfall is fairly constant all year round. The highest recorded temperature was 105.0°F in 1980. The lowest recorded temperature was -3.0°F on January 21, 1985.[12][13]

Additionally, the geographic location of the city, with respect to the principal storm tracks, is especially favorable, as it is south of the average path of storms originating in the higher latitudes, and north of the usual tracks of hurricanes and other major tropical storms.[14] Poquoson was significantly impacted by the most destructive storm of 2003, Hurricane Isabel.

Poquoson is served by two airports. Newport News/Williamsburg International Airport, located in Newport News, and Norfolk International Airport, in Norfolk, both cater to passengers from Hampton Roads. The primary airport for the Virginia Peninsula is the Newport News/Williamsburg International Airport. The Airport is experiencing a 4th year of record, double-digit growth, making it one of the fastest growing airports in the country. In January 2006, the airport reported having served 1,058,839 passengers.[16] Norfolk International Airport (IATA: ORF, ICAO: KORF, FAA LID: ORF), serves the region. The airport is located near Chesapeake Bay, along the city limits of Norfolk and Virginia Beach.[17] Seven airlines provide nonstop services to twenty five destinations. ORF had 3,703,664 passengers take off or land at its facility and 68,778,934 pounds of cargo were processed through its facilities.[18] The Williamsburg-Jamestown Airport provides general aviation services and is located in Williamsburg.[19]

Amtrak serves nearby Newport News, Virginia and Williamsburg, Virginia with three trains a day. The line runs west along the Virginia Peninsula to Richmond and points beyond. Connecting buses are available to Norfolk and Virginia Beach. A high speed rail connection at Richmond to both the Northeast Corridor and the Southeast High Speed Rail Corridor are also under study.[20] Poquoson is served by two state highways:

The Newport News Waterworks was begun as a project of Collis P. Huntington as part of the development of the lower peninsula with the Chesapeake and Ohio Railway, the coal piers on the harbor of Hampton Roads, and massive shipyard which were the major sources of industrial growth which helped found Newport News as a new independent city in 1896. It includes reservoirs at Skiffe's Creek and another near Walker's Dam on the Chickahominy River. A regional water provider, in modern times it is owned and operated by the City of Newport News, and serves over 400,000 people in the cities of Hampton, Newport News, Poquoson, and portions of York County and James City County.[24]

Poquoson has access to four area hospitals, served by Riverside Medical Center and Bon Secours Mary Immaculate Hospital in Newport News and the Sentara Careplex and the V.A. Medical Center in Hampton.[26] 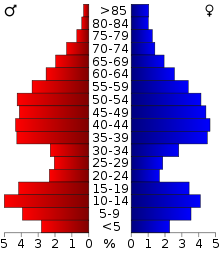 There were 4,166 households out of which 39.1% had children under the age of 18 living with them, 69.4% were married couples living together, 8.4% had a female householder with no husband present, and 19.1% were non-families. 15.9% of all households were made up of individuals and 7.1% had someone living alone who was 65 years of age or older. The average household size was 2.75 and the average family size was 3.08.

The Poquoson Seafood Festival is the biggest event in Poquoson. Events at the Seafood Festival are singers/bands, shops, food, crafts, and kids entertainment. This even includes rides. It is on the third weekend in October every year. It lasts from Friday to Sunday. Sometimes fireworks are even added into the celebration.[27]

The city is served by Poquoson City Public Schools. There are 4 public schools in Poquoson. There is the Poquoson Primary School for Kindergarten, and 1st and 2nd grades. Poquoson Elementary School serves the 3rd, 4th, and 5th grades. Poquoson Middle School offers 6th, 7th, and 8th grade classes. Poquoson High School has grades 9-12. Poquoson's mascot is the Bull Islander.[28]

There are no private schools or colleges in Poquoson and York County. However, there are institutions of each type close by on the Virginia Peninsula. Some of the private schools include Hampton Roads Academy, Mt. Carmel Catholic School, Peninsula Catholic High School, and Denbigh Baptist Christian School, all in Newport News.

Higher education is available at Thomas Nelson Community College, with campuses in Hampton and James City County, Old Dominion University and Norfolk State University in Norfolk, Christopher Newport University in Newport News, Hampton University in Hampton, and the College of William and Mary in Williamsburg.[29][30][31][32][33][34]