Southampton County is a county located in the Commonwealth of Virginia, a state of the United States. As of 2010, the population was 18,570.[1] Its county seat is Courtland[2].

During the 17th century, shortly after establishment of Jamestown, Virginia in 1607, English settlers explored and began settling the areas adjacent to Hampton Roads. In 1634, the English colony of Virginia was divided into eight shires (or counties) with a total population of approximately 5,000 inhabitants. Most of Southampton County was originally part of Warrosquyoake Shire. The shires were soon to be called counties. Warrosquyoake Shire was renamed Isle of Wight County in 1637.

In August 1831, enslaved Nat Turner led a slave rebellion of Black slaves in Southampton County against local Whites. When the rebellion was crushed, Turner and other Blacks were executed.

Southampton County may have been named for Southampton, a major city in England, or for Henry Wriothesley, 3rd Earl of Southampton, one of the founders of the Virginia Company and a supporter of colonization in North America.

Nathaniel "Nat" Turner (October 2, 1800 – November 11, 1831) was an American slave who led a slave rebellion in Virginia on August 21, 1831 that resulted in 56 white deaths and over 55 black deaths. Born into slavery in Southampton County, he launched his rebellion there which gained up to 70 slaves at its height. The rebellion was suppressed by the white militia within two days ,but the legacy of Nat Turner's Rebellion lives to this day. Turner was convicted, sentenced to death, and executed. In the aftermath, the state executed 56 blacks accused of being part of Turner's slave rebellion. Two hundred blacks were also beaten and killed by white militias and mobs reacting with violence. Across Virginia and other southern states, state legislators passed new laws prohibiting education of slaves and free blacks, restricting rights of assembly and other civil rights for free blacks, and requiring white ministers to be present at black worship services.

U.S. Major General George Henry Thomas (1816–1870) was born at Newsom's Depot. In 1831, Thomas, his sisters, and his widowed mother were forced to flee from their home and hide in the nearby woods in the wake of Nat Turner's slave rebellion.[3] It was illegal to educate slaves in Virginia, however Thomas taught his family's 15 slaves to read.[4]

He was appointed to the United States Military Academy at West Point, New York, and he served in the U.S. Army for 20 years before the American Civil War broke out in 1861.

At that time, many Southern-born officers were torn between loyalty to their states and loyalty to their country. Thomas struggled with the decision but opted to remain with the United States. His Northern-born wife and his dislike of States Rights probably helped influence his decision. In line for an appointment by the Governor of Virginia to become Commandant of Cadets at Virginia Military Institute (VMI), he turned the opportunity down and remained in the Union Army. In response, his family turned his picture against the wall, destroyed his letters, and never spoke to him again. (During the economic hard times in the South after the war, Thomas sent some money to his sisters, who angrily refused to accept it, declaring they had no brother.) Thomas held many commands during the War, including leading the Army of the Cumberland. He earned the rank of Major General.

William Mahone (1826–1895), a railroad builder and U.S. Senator, was born in the tiny community of Monroe, which was located on the Nottoway River about 8 miles (13 km) south of present-day Courtland. His parents were Fielding and Martha Mahone. They moved to Jerusalem in 1840, where Fielding Mahone ran a hotel (tavern). Young Billy Mahone attended Virginia Military Institute (VMI), trained as a civil engineer, and graduated in the class of 1847. He worked as a school teacher before, in 1853, he was hired to build the Norfolk and Petersburg Railroad (Now a part of Norfolk Southern).

In 1855, he married Otelia Butler (1837–1911), the daughter of the late Dr. Robert Butler of Smithfield, who had been Virginia State Treasurer prior to his death in 1853. Popular legend has it that the Mahones traveled along the newly completed Norfolk and Petersburg Railroad naming stations. Otelia was reading Ivanhoe a book written by Sir Walter Scott. From his historical Scottish novels, Otelia chose the place names of Windsor, Waverly and Wakefield.

Otelia Mahone is said to have tapped the Scottish Clan "McIvor" for the name of Ivor. Later, when they could not agree, it is said that they became even more creative, and invented a new name, which is how the tiny community of Disputanta was created. The N&P railroad was completed in 1858.

William Mahone became a Major General in the Confederate Army during the American Civil War, while Otelia Mahone served as a nurse in Richmond. After the War, he returned to railroading. He later led the state's Readjuster Party, helped obtain funding to create the school which became Virginia State University near Petersburg, and became a Senator in the United States Congress.

A large portion of U.S. Route 460 between Petersburg and Suffolk is named in honor of General William Mahone. 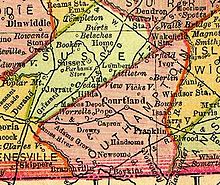 Southampton County from 1895 map of Virginia

Southampton County is bounded by the Blackwater River on the east and the Meherrin River on the west. The Nottoway River flows through the center of the county. All three rivers are tributaries of the Chowan River, which flows south into Albemarle Sound, North Carolina. The Blackwater River separates Southampton County from Isle of Wight County, and the Meherrin River separates it from Greensville County.