The Public Broadcasting Service (PBS) is an American non-profit public broadcasting television network with 354 member TV stations in the United States which hold collective ownership.[2] Its headquarters is in Arlington, Virginia.

PBS is the most prominent provider of television programs to U.S. public television stations, distributing series such as PBS NewsHour, Masterpiece, and Frontline. Since the mid-2000s, Roper polls commissioned by PBS have consistently placed the service as America's most-trusted national institution.[3] However, PBS is not responsible for all programming carried on public TV stations; in fact, stations usually receive a large portion of their content (including most pledge drive specials) from third-party sources, such as American Public Television, NETA, WTTW National Productions and independent producers. This distinction is a frequent source of viewer confusion.[4] 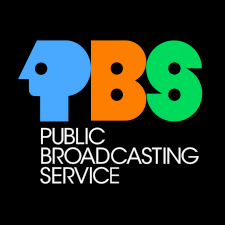 Unlike the model of America's commercial broadcasting television networks, in which affiliates give up portions of their local advertising airtime in exchange for network programming, PBS member stations pay substantial fees for the shows acquired and distributed by the national organization.

This relationship means that PBS member stations have greater latitude in local scheduling than their commercial broadcasting counterparts. Scheduling of PBS-distributed series may vary greatly from market to market. This can be a source of tension as stations seek to preserve their localism, and PBS strives to market a consistent national line-up. However, PBS has a policy of "common carriage" requiring most stations to clear the national prime-time programs on a common broadcast programming schedule, so that they can be more effectively marketed on a national basis.

Unlike its radio counterpart, National Public Radio, PBS has no central program production arm or news department. All of the programming carried by PBS, whether news, documentary, or entertainment, is created by (or in most cases produced under contract with) other parties, such as individual member stations. WGBH in Boston is one of the largest producers of educational television programming, including American Experience, Masterpiece Theater, Nova, Antiques Roadshow and Frontline, as well as many other children's and lifestyle shows. News programs are produced by WETA-TV (PBS Newshour) in Washington, D.C., WNET in New York and WPBT in Miami. The Charlie Rose interview show, Secrets of the Dead, NOW on PBS, Nature, and Cyberchase come from or through WNET in New York. Once a program is offered to, and accepted by, PBS for distribution, PBS (and not the member station that supplied the program) retains exclusive rights for rebroadcasts during the period for which such rights were granted; the suppliers do maintain the right to sell the program in non-broadcast media such as DVDs, books, and sometimes PBS licensed merchandise (but sometimes grant such ancillary rights as well to PBS).

PBS stations are commonly operated by non-profit organizations, state agencies, local authorities (e.g., municipal boards of education), or universities in their city of license. In some U.S. states, PBS stations throughout the entire state may be organized into a single regional "subnetwork" called a state network (e.g., Alabama Public Television). Unlike public broadcasters in most other countries, PBS does not own any of the stations that broadcast its programming (i.e., there are no PBS Owned-and-operated stations (O&O) anywhere in the country). This is partly due to the origins of the PBS stations themselves, and partly due to historical broadcast license issues.

In the modern broadcast marketplace, this organizational structure is considered outmoded by some media critics.[citation needed] A common restructuring proposal is to reorganize the network so that each state would have one PBS member which would broadcast state-wide. However, this proposal is controversial, as it would reduce local community input into PBS programming, especially considering how PBS stations are significantly more community-oriented, according to the argument, than their commercial broadcasting counterparts.

In 1994, The Chronicle of Philanthropy, an industry publication, released the results of the largest study of charitable and non-profit organization popularity and credibility. The study showed that PBS was ranked as the 11th "most popular charity/non-profit in America" from over 100 charities researched, with 38.2% of Americans over the age of 12 choosing "love" and "like a lot" for PBS.[6][7][8][9]

In December 2009, PBS signed up for the Nielsen ratings audience measurement reports for the first time.[10]

Beginning on October 2, 1989, the phrase "Viewers Like You" has been used to indicate PBS's gratitude to viewers of PBS that contributed to the production costs. The phrase appears in the list of underwriters, at the start and end of all PBS programs with viewer contributions.

Prior to October 2, 1989, donations by viewers of PBS members were recognized as contributions from "this (station) and other public television stations." The on-screen text just showed "Public Television Stations".

Beginning on November 1, 1999, the PBS underwriting guidelines required all announcements to read, "This program was made possible by contributions to your PBS station from Viewers Like You. Thank You."

However, PBS is not the only distributor of public television programming to the member stations. Other distributors have emerged from the roots of the old companies that had loosely held regional public television stations in the 1960s. Boston-based American Public Television (former names include Eastern Educational Network and American Program Service) is second only to PBS for distributing programs to U.S. non-commercial stations. Another distributor is NETA (formerly SECA), whose properties have included The Shapies and Jerry Yarnell School of Fine Art. In addition, the member stations themselves also produce a variety of local shows, some of which subsequently receive national distribution through PBS or the other distributors.

PBS stations are known for rebroadcasting British television costume dramas and comedies (acquired from the BBC and other sources); consequently, it has been joked that PBS means "Primarily British Series". However, a significant amount of sharing takes place. The BBC and other media outlets in the region such as Channel 4 often cooperate with PBS stations, producing material that is shown on both sides of the Atlantic. Less frequently, Canadian, Australian, and other international programming appears on PBS stations (such as The Red Green Show, currently distributed by syndicator Executive Program Services); the public broadcasting syndicators are more likely to offer this programming to the U.S. public stations. PBS is also known for broadcasting British comedy and science fiction programs such as 'Allo 'Allo!, Are You Being Served?, The Benny Hill Show, Doctor Who, Father Ted, Fawlty Towers, Harry Enfield and Chums, Keeping Up Appearances, Monty Python's Flying Circus, Mr. Bean and Red Dwarf.

Stations and/or networks that have produced or presented PBS-distributed programming include:

PBS has also spun-off a number of TV networks, often in partnership with other media companies: PBS YOU (ended January 2006, and largely succeeded by American Public Television's Create), PBS KIDS (ended October 1, 2005), PBS KIDS Sprout, PBS World (commenced August 15, 2007), and PBS-DT2 (a feed of HDTV and letterboxed programming for digitally equipped member stations), along with packages of PBS programs that are similar to local stations' programming, the PBS Satellite Service feeds. PBS Kids GO! was promised for October 2006, but PBS announced in July that they would not be going forward with it as an independent network feed (as opposed to the pre-existing two-hour week daily block on PBS).

Some or all are available on many digital cable systems, on free-to-air (FTA) TV via communications satellites,[11] as well as via direct broadcast satellite. With the transition to terrestrial digital television broadcasts, many are also often now available as "multiplexed" (multicasting) channels on some local stations' standard-definition digital signals, while DT2 is found among the HD signals. PBS Kids announced that they will have an early-morning Miss Lori and Hooper block with four PBS Kids shows usually around 08:00. With the absence of advertising, network identification on these PBS networks were limited to utilization at the end of the program, which includes the standard series of bumpers from the "Be More" campaign.

While various digital subchannels are operated on a regional or statewide basis, the creation of individual PBS member stations or groups of stations is called a state network. While not operated or controlled by the national PBS organization, these extra channels typically rebroadcast portions of the programming from the main PBS service in addition to local and regional public affairs coverage and are carried as subchannels of existing PBS stations.

Founded in 1993, PBS Kids is the brand for children's programming aired by PBS in the United States. The PBS Kids network, which was established in 1999 and ran for seven years, was largely funded by DirecTV. The channel ceased operation on October 1, 2005, in favor of a new joint commercial venture, PBS Kids Sprout. However, the original programming block still exists on PBS.

The network has shown some sporting events in its history.

During the 1970s and 1980s PBS was the leading American tennis broadcaster.[12][13] Bud Collins and Donald Dell were PBS announcers. PBS was the first American network to regularly broadcast tennis tournaments.[citation needed] PBS also broadcast Tennis for the Future, hosted by Vic Braden.[14]

From 1984 to 1987, PBS broadcast Ivy League football. Dick Galiette and Upton Bell called games for the first season and Marty Glickman and Bob Casciola called the games in 1985. In 1986, PBS increased its coverage and had two announcing teams, Brian Dowling and Sean McDonough, who had been the sideline reporter for the prior two seasons were the play by play announcers and Bob Casciola and Len Simonian were the color analysts. For the final season McDonough and Jack Corrigan were the game announcers and Mike Madden was the sideline reporter.[15]

PBS was founded to provide diversity in programming at a time when most television was broadcast over the public airwaves by only three privately owned national networks (as opposed to the multitude of programming sources provided by today's private cable or satellite delivery services). There is debate as to whether or not the PBS system has outlived its public necessity.[17] Public television proponents maintain that the original mandate to provide universal access, particularly to rural viewers and those who cannot afford to pay for the private television services, remains vital.[citation needed] In addition, they argue that PBS provides some types of critical television shows which would not be shown at all on the commercial broadcasting television networks and television channels, including extensive non-commercial educational children's programming, scientific exposition, in-depth documentaries and investigative journalism.[citation needed]

Since 53% to 60% of public television's revenues come from private membership donations and grants,[18] most stations solicit individual donations by methods including fundraising, pledge drives or telethons which can disrupt regularly scheduled programming. Some viewers find this a source of annoyance since normal programming is often replaced with specials aimed at a wider audience to solicit new members and donations.[19]

One criticism is that PBS's viewers are substantially wealthier than the average American. Thus, the tax funding of PBS is, according the critics, a transfer of money from the poor to the rich.[25]

Another criticism is that PBS has extensively used its tax subsidized programs in order to lobby for tax money to itself by airing numerous advertisements urging its listeners to call Congress regarding PBS.[25]