Dragon Tales is an American animated pre-school children's television series chronicling the adventures of two siblings, Max and Emmy and their dragon friends Cassie, Ord, Zak, Wheezie, and Quetzal. The television series, based on characters designed by Ron Rodecker, was created by Jim Coane, an Emmy-award-winning creator and executive producer, along with the creative talents of Wesley Eure (author of The Red Wings Of Christmas, star of Land of the Lost, Days Of Our Lives & Finders Keepers). Originals have been shown on the PBS Kids Channel/PBS Kids Sprout and Public Broadcasting Service (PBS) in the United States from Labor Day 1999 to November 25, 2005. However, PBS has declared that it will no longer hold the license to the series starting on September 1, 2010.[1] Episodes of the show are still sold on DVD.[2]

Dragon Tales is based on the characters created in 1978 by Laguna Beach, California artist and retired educator Ron Rodecker.[3] In 1997, Jim Coane, then a producer at Columbia TriStar Television, found the artwork and developed it into a television series with several writers. Coane then brought the project to Sesame Workshop, where Marjorie Kalins helped him and Columbia TriStar Television obtain a grant from the Department of Education and the Corporation for Public Broadcasting. The grant proposal was written by Wesley Eure. Coane was the executive producer for the first two seasons.

When six-year-old Emmy and her four-year-old brother Max move into a new house, they discover an ancient dragon scale that transports them to Dragon Land, a world of fantasy that brims with talking trees, rainbow rivers, gnomes, giants – and dragons! They meet the young dragons Ord, Cassie, Zak and Wheezie, who have human personalities and share similar fears and questions about growing up as Emmy and Max.

Alongside their new dragon friends and their teacher Quetzal, Emmy and Max explore the magical world that they’ve found, encountering challenges and working together to find solutions. Each episode introduces a new challenge for the children and the dragons. Topics like dealing with fear of the doctor, learning to speak up, and coping with separation from a sibling help viewers learn strategies for navigating their own challenges.

In the episodes, the children go to Dragon Land by using their magical dragon's scale found in a hidden location within their playroom and reciting the verse "I wish, I wish, with all my heart, to fly with dragons, in a land apart." The children transport back to their world in their playroom by using the same refrain and the phrase "I wish, I wish, to use this rhyme, to go back home, until next time."

In Dragon Land, the children meet up with their Dragon friends, Cassie, Ord, Zak, and Wheezie (the latter two each being half of a two-headed dragon), and their bilingual teacher, Quetzal, as they learn valuable life lessons, aided by the fact that the children are inexperienced with the magical flora and fauna of Dragon Land.

The series mixes in Spanish language elements to promote a bilingual experience for the audience. By incorporating parts of another language, the show appeals to a wider audience, as well as providing a new learning experience for children.

Each show is divided into three segments: the first story, a song known as a "Dragon Tune," and the second story. Each story is approximately 10–12 minutes long. 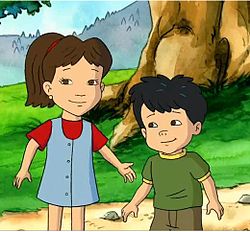 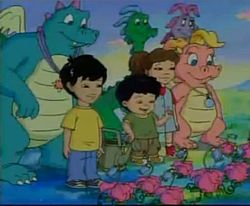 Emmy, voiced by Andrea Libman, is six years old. She commonly appears as the leader of the group until she gave her position to Enrique while helping him get used to Dragonland. She is Max's older sister. Her best friend is Cassie, and she is perhaps known for saying, "Definitely!" whenever a good idea arises.

Max, voiced by Danny McKinnon, is four years old. He is Emmy's younger brother. For the most part, he and Emmy get along fine, but occasionally have arguments. His best friend is Ord.

Enrique, voiced by Aida Ortega, is Emmy and Max's new friend who moved to the US from Colombia. He first appears in the beginning of Season 3 and travels to Dragon Land with the children. His recent experiences in South America provide more opportunities for the characters to demonstrate the meanings of new Spanish words, much like Dora the Explorer.

He rides with Zak and Wheezie, the 2-headed dragon who rarely flew with any human friends prior to Enrique's debut.

Ord, voiced by Ty Olsson, is the blue male dragon who can turn invisible when he's scared. When he gets upset, a rain cloud forms over his head and starts pouring rain on him; this happens when he loses his blanket. He is best friends with Max, who rides on his back. A running gag in the show features Ord making "dragoncorn" by throwing purple kernels in the air and cooking the kernels with his fire breath.

Cassie, voiced by Chantal Strand, is the cute, sweet, pink female dragon of the group. Her best friend is Emmy, with whom she always rides. Cassie is quite shy and unsure of herself, which makes speaking up for herself difficult. Cassie sometimes shrinks to a small size when she is upset. A running gag in the series is how Cassie mentions that she has seventy-two brothers and sisters.

Zak & Wheezie, voiced by Jason Michas and Kathleen Barr, are a two-headed dragon and are siblings; Zak (green) is the male, and Wheezie (purple) is the female. Zak prefers to pursue things in a logical manner. Wheezie is very messy, loud, and ignorant much to her brother's annoyance, and is perhaps known for saying, "Loooove it!", when she loves something.

Quetzal, portrayed by Eli Gabay, is a dragon who is the teacher at The School in the Sky where young dragons attend. He has an identical twin brother named Fernando who works in his garden. Quetzal typically speaks with a Mexican accent, and is likely named for the Aztec deity Quetzalcoatl.

Lorca, voiced by Lenore Zann, is Max, Emmy, Zak, Wheezie, Ord, and Cassie's friend. He is in a wheelchair and is incapable of flight.

Sid Sycamore, voiced by Scott McNeil, is a talking tree who loves telling jokes that relate to the concept of trees; the dragons' tree house is attached to him.

Finn, voiced by Ellen Kennedy, is Cassie's younger brother. He is light blue.

Other characters in Dragon Land

Each of the following have appeared more than once:

Between each short there is a song performed by either Sophie Michalitsianos, Jeff Southworth, Joey Levine, or Mary Wood. These songs are available on CD.