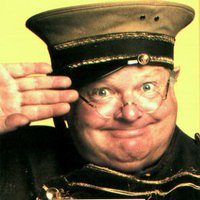 Alfred "Alfie" Hill was born in and grew up in Wilton Road, Upper Shirley, where he and his brother attended Tauntons School. During , Hill was one of the scholars evacuated with the school to , East Way, . After leaving Tauntons School, Hill worked variously as a in , bridge operator, driver and drummer, before he finally got a foot in the door of the entertainment industry by becoming an assistant stage manager. Inspired by the 'star comedians' of British shows, Hill set out to make his mark in show business. For the stage, he changed his first name to 'Benny', in homage to his favourite comedian, . Hill began appearing at s and dinners before graduating to nightclub and theatre jobs. Hill auditioned for Soho's famed (home of "", a popular show of singers, comedians and nude girls), but he was not hired. Benny's first job in professional theatre as a performer was as 's straight man, beating a then unknown for the role.

Hill worked compulsively and had only a few friends, although colleagues insist he was never lonely but content with his own company. He never married, although he did propose to two women — one the daughter of a British writer — and was rejected by both. Although he owned the family home in Southampton he never owned his own home in London, nor a car, preferring to rent, first a large double apartment in Queensgate, London, for 26 years until 1986, and then a small flat in , within walking distance of the studios of Thames Television where he taped his shows. His mother died in 1976 aged 82, and Benny kept the family house at 22 Westrow Gardens in Southampton as a shrine to her, not changing anything. Before his move to Teddington, whilst looking for somewhere else to live in the Richmond area of London, he lived at 22 Westrow Gardens.

Travelling was the luxury he permitted himself. Hill became a first-degree , enjoying frequent visits to . Until the 1980s, he could enjoy anonymity in France's outdoor cafes, public transport, and socialising with local women. Besides mastering French, Hill could get by speaking German, Dutch and Italian in his travels. Hill's overseas holidays were often gathering missions for comedy material, some inspired by foreign surroundings, or borrowed from regional acts.

Hill was a distant relative of the Australian actress and singer , Hill's cousin being Valance's grandfather.Fact|date=April 2008

Between the end of the war and the dawn of television, Hill worked as a radio performer. His first appearance on television was in 1949 in "Hi There". He continued to work intermittently until his career took off with "The Benny Hill Show" in 1955 on . Recurring players on his show during the BBC years included , , Peter Vernon, , and his co-writer from the mid-1950s to early 1960s, Dave Freeman. He remained mostly with the BBC through 1968, except for a few sojourns with station ATV in 1957–1960 and again in 1967. He also had a short-lived radio programme, "Benny Hill Time", on 's Light Programme service from 1964 to 1966. In addition, he attempted a sitcom , "Benny Hill", which ran for three series from 1962 to 1963, in which he played a different character in each episode. In 1964, he played in an all-star TV film production of 's "".

Hill's song, "Ernie (The Fastest Milkman In The West)," on the "Best of Benny Hill" album made the UK chart as Christmas number one single in 1971. A link to the lyrics is provided in the External Links section of this article.

In 1969, his show moved from the BBC to , where "" remained until cancellation in 1989, with an erratic schedule of one-hour specials.

denounced him as a "dirty old man, tearing the clothes off nubile girls", and other British performers in the 1980s followed, portraying themselves by contrast as "alternative", enlightened and socialist. "" newspaper opined the vendetta was "like watching an elderly uncle being kicked to death by young thugs" [ [http://comment.independent.co.uk/commentators/article620206.ece The Independent- Why did the British disown Benny Hill?, published 27 May 2006] ] . Since Elton achieved his own mainstream success with similar materialFact|date=October 2008 he has been denounced in his turn as a "hypocrite" and "sell-out"Fact|date=October 2008.

A common criticism was that Hill played a dirty old man who chased women in public places, but his producer, 1979-89, Dennis Kirkland, said it was the women who chased Hill in anger for undressing them, all of which were done accidentally by some ridiculous means. An article on Saturday, in "The Independent" quoted Hill and Dennis Kirkland as saying they believed this misrepresentation demonstrated critics could not have watched his programmes.
, who worked as a featured artist on the shows from 1972 -75, remembers the 'runoff's', as they were known, to alternate between chasing and being chased in a crocodile, which sometimes would change midway behind a tree coming out the other side with the chasers being chased. To quote his biographer , "In Britain, Benny Hill is taboo . . . " His show is rarely repeated on terrestrial, satellite or cable TV, although it has recently been aired on the cable channel. An Australian channel, showed some episodes as part of a "Great Comedy Classics" slot.

Radio and TV show host claimed that he was a fan of Benny Hill and that he considered Hill "as American as the Beatles." Indeed, during an episode of "", Carolla performed in what was billed as a tribute to "our favourite Englishman, Sir Benny Hill" in a more risqué takeoff of the sketches that Hill popularised. Carolla played a rude and lecherous waiter — a role Hill essayed numerous times in his shows — and the sketch featured many of the staples of Hill's shows, including a -esque bald man, as well as the usual scantily clad women.

In "", filmed before Hill's death, celebrities such as , , , , and , among others, expressed their appreciation of and admiration for Hill and his humour (and in Reynolds' case, the appreciation extended to the as well).

In 2006, the broadcaster and critic launched a campaign to erect a statue of Hill in Southampton, with the support of , and other British comedy favourites. Those taking part in the first fund-raising concert included , and .

Hill's health began to decline in the early 1990s. He suffered heart problems, and on , doctors told him he needed to lose weight and recommended a . He declined and was diagnosed a week later with .

Benny Hill died on or about , , Easter weekend, alone in his flat at 7 Fairwater House, Twickenham Road, Teddington, , at the age of 68. On , neighbours called the police, who then found Hill, deceased, sitting in his armchair in front of the television. On the day Hill died, a new contract arrived in the post from .

The cause of death was listed as . His death coincided with that of , who died on aged 75. An obituary appeared in newspapers on , with Hill (whose death was yet to be discovered) saying that he and Howerd were "great friends". This has led to confusion as to who died first.

Hill was buried at near his birthplace in . In October 1992, following rumours that he was buried with large amounts of gold jewellery, an attempt was made by thieves to exhume his body. However, when authorities looked into his open coffin the following morning, there was no treasure. Consequently, only the culprits know whether anything valuable was inside. Hill was re-buried with a new coffin lid and a solid slab across the top of the grave.

In Hill's will, he left his estimated £10 million (GBP) estate to his late parents. Next in line were his brother Leonard and sister Diana, with neither of whom had he enjoyed the closest of relationships, and both of whom were also dead. This left his seven nieces and nephews, among whom the money — approximately £7.5 million — was divided. According to Dennis Kirkland a note was found among his belongings assigning huge sums of money to his friends , , , and , but it was neither signed nor witnessed and had no legal standing. It may also have been money he had handed out to his friends in his time or what Benny Hill had worked out they had earned through him. It is merely speculation to say that the list purported to have been found was tantamount to a will.

On , broadcast the documentary "Is Benny Hill Still Funny?". The programme featured an audience that comprised a cross-section of young adults who had little or no knowledge of Hill's comedy style. The aim was to discover whether or not the alternative comedians' criticism of Hill was valid to a generation that enjoyed the likes of "", "" and "". The participants were asked to watch a 30-minute compilation that included examples of Hill's humour from both his early BBC and later Thames shows. The responses were continuously measured and the results demonstrated that nobody took offence at any of the sketches shown. In addition, the "appreciation" figure was revealed to be very respectable, which would have guaranteed a series commission had it been a modern television pilot program. Hill's silent "Wishing Well" sketch was discovered to be the most popular. Alternative comedian , a harsh critic of Hill in the 1980s, was interviewed in the programme. Although still having reservations on certain aspects of Hill's sketches, Elton admitted he was an admirer of Hill's talent and abilities as a comic performer.

The most common running gag in Benny Hill's shows was the closing sequence, which was literally a "running gag" in that it featured Benny Hill and other male characters lecherously chasing scantily clad female characters, who would usually end up turning the tables and chasing Benny. This was commonly filmed using and techniques for comic effect.

The tune used in all the chases, "", is commonly referred to as 'The Benny Hill Theme'. It has been used in form of parody in many ways by television shows, a small number of films and video games.

* [http://eastleighso50.tripod.com/id5.html The Eastleigh Photograph Archive] Photos of the dairy and streets where Benny worked as a milkman, inspiring the song Ernie (The fastest milkman in the west)
* [http://www.tnsf.ca/bennyhill The Benny Hill Songbook] Lyrics and transcripts
* [http://www.runstop.de/bennysplace/ Benny's Place featuring Louise English & Hill's Angels] A tribute to Benny Hill and his beautiful ladies known as Hill's Angels
* [http://www.laughterlog.com/Personalities/per-bhill.HTM Laughterlog.com] Article with complete list of appearances on television, radio and record
*Find A Grave|id=481