Multicast
"Multicast" is sometimes also incorrectly used to refer to a multiplexed broadcast. 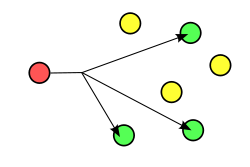 In computer networking, multicast is the delivery of a message or information to a group of destination computers simultaneously in a single transmission from the source creating copies automatically in other network elements, such as routers, only when the topology of the network requires it.

Multicast is most commonly implemented in IP multicast, which is often employed in Internet Protocol (IP) applications of streaming media and Internet television. In IP multicast the implementation of the multicast concept occurs at the IP routing level, where routers create optimal distribution paths for datagrams sent to a multicast destination address.

IP multicast is a technique for one-to-many communication over an IP infrastructure in a network. It scales to a larger receiver population by not requiring prior knowledge of who or how many receivers there are. Multicast uses network infrastructure efficiently by requiring the source to send a packet only once, even if it needs to be delivered to a large number of receivers. The nodes in the network take care of replicating the packet to reach multiple receivers only when necessary.

The most common transport layer protocol to use multicast addressing is User Datagram Protocol (UDP). By its nature, UDP is not reliable—messages may be lost or delivered out of order. Reliable multicast protocols such as Pragmatic General Multicast (PGM) have been developed to add loss detection and retransmission on top of IP multicast.

IP multicast is widely deployed in enterprises, commercial stock exchanges, and multimedia content delivery networks. A common enterprise use of IP multicast is for IPTV applications such as distance learning and televised company meetings.[citation needed]

As of 2006[update], most effort at scaling multicast up to large networks have concentrated on the simpler case of single-source multicast, which seems to be more computationally tractable.[citation needed]

Still, the large state requirements in routers make applications using a large number of trees unworkable using IP multicast. Take presence information as an example where each person needs to keep at least one tree of its subscribers, if not several. No mechanism has yet been demonstrated that would allow the IP multicast model to scale to millions of senders and millions of multicast groups and, thus, it is not yet possible to make fully general multicast applications practical. For these reasons, and also reasons of economics, IP multicast is not, in general, used in the commercial Internet backbone. The increasing availability of WiFi Access Points that support multicast IP is facilitating the emergence of WiCast WiFi Multicast that allows the binding of data to geographical locations.

Explicit Multi-Unicast (XCAST) is an alternate multicast strategy to IP multicast that provides reception addresses of all destinations with each packet. As such, since the IP packet size is limited in general, XCAST cannot be used for multicast groups of large number of destinations. The XCAST model generally assumes that the stations participating in the communication are known ahead of time, so that distribution trees can be generated and resources allocated by network elements in advance of actual data traffic.

Other multicast technologies not based on IP multicast are more widely used. Notably the Internet Relay Chat (IRC), which is more pragmatic and scales better for large numbers of small groups. IRC implements a single spanning tree across its overlay network for all conference groups. This leads to suboptimal routing for some of these groups however. Additionally, IRC keeps a large amount of distributed states that limit growth of an IRC network, leading to fractioning into several non-interconnected networks.[1] The lesser known PSYC technology uses custom multicast strategies per conference.[2] Also some peer-to-peer technologies employ the multicast concept when distributing content to multiple recipients.