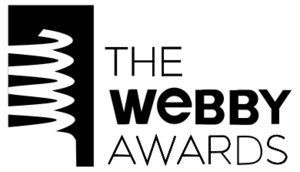 imagesize = 150px
caption = Webby Awards logo
description = "Excellence on the Internet including Websites, Interactive Advertising, Online Film & Video and Mobile content." [cite web|url=http://www.webbyawards.com/about/|title=About|publisher=Webby Awards|accessdate=2008-06-01]
presenter =
country =
year = 1994-1996 (World Wide Web Organization)
1996 - Present (International Academy of Digital Arts and Sciences)
website = http://www.webbyawards.com/The Webby Awards is an international award honoring excellence on the , including , interactive advertising, online film and video, and mobile web sites, presented by The since 1996. There is also a second set of awards called the People's Voice Awards for the same categories which are given by popular .

The phrase "The Webby Awards" was used from 1994-1996 by the World Wide Web Organization, [http://web.archive.org/19970129221734/web.org/webby/] which was first introduced in 1994 by WebMagic, and ADX Kentrox. As one of its services, it sponsored "the monthly Webby awards to spotlight online innovation. Web.org was decommissioned in 1997. [ [http://www.webmagic.com/archive/index.html WebMagic, Inc. Site Archive ] ] [ [http://www.webmagic.com/archive/web.org/index.html This is Web dot Org! ] ]

The phrase "The Webby Awards" has been used since 1996 to describe an annual awards ceremony. It was initially sponsored by "The Web" magazine which was published by , and produced by . Winners were selected by a group which would officially become the (IADAS) in 1998. After "The Web Magazine" closed, the ceremonies continued. [ [http://www.webbyawards.com/about/history.php Webby Awards - History] ]

In 2006, The Webby Awards launched three new award programs including categories honoring interactive advertising, mobile content, and the Webby Film and Video Awards, which honors original film and video premiering on the Internet. In 2008, the 12th Annual Webby Awards received nearly 10,000 entries from over 60 countries worldwide.

The Webby Awards are presented in over 100 categories among all four types of entries. A website can be entered on multiple categories and receive multiple awards.

The Webbys are famous for limiting recipients to five word speeches, which are often humorous. For example, in 2005, former Vice President 's was "Please don't recount this vote." He was introduced by who used the same format to state, "We all invented the Internet."

The Webbys have been criticized for their pay-to-enter and pay-to-attend policies, and for not taking most websites into consideration before distributing their awards. [http://www.chicagotribune.com/technology/chi-hypertext-webbys-0514may14,0,6525152.column] [http://www.slate.com/id/2188581/]