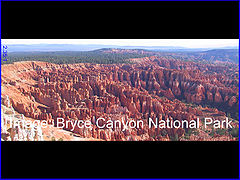 Letterboxing is the practice of transferring film shot in a widescreen aspect ratio to standard-width video formats while preserving the film's original aspect ratio. The resulting videographic image has mattes (black bars) above and below it; these mattes are part of the image (i.e., of each frame of the video signal). LTBX is the identifying abbreviation for films and images so formatted. The term refers to the shape of a letter box, a slot in a wall or door through which mail is delivered, being rectangular and wider than it is high.

Letterboxing is used as an alternative to a full-screen, pan-and-scan transfer of a widescreen film image to videotape or videodisc. In pan-and-scan transfers, the original image is cropped to the narrower aspect ratio of the destination format, usually the 1.33:1 (4:3) ratio of the standard television screen, whereas letterboxing preserves the film's original image composition as seen in the cinema. Letterboxing was developed for use in 4:3 television displays before widescreen television screens were available, but it is also necessary to represent on a 16:9 widescreen display the unaltered original composition of a film with a wider aspect ratio, such as Panavision's 2.35:1 ratio.

Letterbox mattes are usually symmetrical (both the top and bottom mattes are roughly similar in size), but in some instances the picture can be elevated so the bottom matte is much larger, usually for the purpose of placing "hard" subtitles within the matte to avoid overlapping of the image. This was often done for letterbox widescreen anime on VHS, though the practice of "hiding" subtitles within the lower matte also is done with symmetrical mattes, albeit with less space available. The placing of "soft" subtitles within the picture or matte varies according to the DVD player being used,[1] though it appears to be dependent on the movie for Blu-ray disc.[2]

An alternative to letterboxing is anamorphic widescreen presentation, which squeezes the picture horizontally to fit into a narrower aspect ratio. The player or receiver must correct this distortion by either stretching the image back to its original relative width, for display on widescreen televisions, or letterboxing it (during playback) for display on 4:3 video screens. This image transformation generally requires digital signal processing, so letterboxing was the only way in which films were presented in widescreen on home video prior to the DVD format (with a few exceptions outside the mass market, such as Squeeze LD). Anamorphic widescreen video recordings are sometimes called "anamorphically enhanced", in comparison to letterboxed versions. To represent a film wider than 16:9 (e.g., a 2.35:1 film) on a 16:9 display with no cropping, both anamorphic and letterbox techniques (or letterboxing alone) are required; using the anamorphic technique, the mattes will be smaller but still necessary.

Academy ratio (1.37:1) film or video is sometimes stretched to fill a widescreen (16:9) television display, resulting in distortion in which actors appear shorter and fatter. This horizontal stretching distortion can be avoided by pillar boxing the image, effected either in the television set or in the video player, e.g. a DVD player. Occasionally, video is shot in a widescreen format and encoded into 4:3 video incorporating letterboxing into the 4:3 image. This effect is common on personal video websites and old documentaries.[citation needed]

The term letterbox is sometimes used to emphasize that a widescreen motion picture or video has not been anamorphically encoded for 16:9 screens, thus not taking full advantage of the resolution provided by DVD, high-definition television (HDTV), or other media. Because the black mattes are part of the picture, they take up space in the signal that could be used for active picture information, forcing the picture to use less vertical space in the signal than if it were anamorphically encoded. This results in less vertical resolution in the letterboxed picture than in either an anamorphic or pan-and-scan version (which have the same vertical resolution). The reduced vertical resolution is the main disadvantage of letterboxing.

Early use of the letterbox format

The first use of letterbox appeared with the RCA videodisc (CED) format. Initially, letterboxing was limited to several key sequences of a film (e.g., opening and closing credits), but later it was used for the entire film. The first full letterboxed CED release was Amarcord in 1984, and several others followed. Each disc contained a label noting the use of "RCA's innovative wide-screen mastering technique."[3]

In the cinema and home video

In NTSC areas of the world, videocassettes often contained only pan-and-scan versions (notable VHS releases in letterboxed format include Manhattan, Last Tango in Paris, Ghostbusters II (which was released in the incorrect aspect ratio on its initial home video release), The Terminator, The Color Purple, Lady and the Tramp, and Basic Instinct: The Original Director's Cut), but DVD releases tend to be offered in both versions. In PAL areas, which do not suffer so much from low vertical resolution with letterboxed images, letterboxing was more common on videocassettes and is almost ubiquitous on DVDs, with very few films being offered in pan-and-scan releases today.

Movies such as The Graduate and Woodstock that made use of the full width of the movie screen often have the sides cut off and look completely different in non-letterboxed copies from the original theatrical release. This is more apparent in pan-and-scanned movies that remain entirely on the center area of the film image.

The term "SmileBox" is a registered trademark[4] used to describe a type of letterboxing for Cinerama films, such as on the Blu-ray release of How the West Was Won. The image is produced with 3D mapping technology to approximate a curved screen.

Digital broadcasting allows 1.78:1 (16:9) widescreen format transmissions without losing resolution, and thus widescreen is becoming the television norm. Most television programming in the United States, Britain and France is in standard-definition 16:9 and is transmitted in anamorphic format on digital platforms. When using a 4:3 television, it is possible to display such programming in either a letterbox format or in a 4:3 centre-cut format (where the edges of the picture are lost).

A letterboxed 14:9 compromise ratio is often broadcast in analogue transmissions in European countries making the transition from 4:3 to 16:9, for example on BBC One or ITV1 in the United Kingdom.[5] In addition, recent years have seen an increase of "fake" 2.35:1 letterbox mattes on television to give the impression of a cinema film, often seen in adverts, trailers or television programmes such as Top Gear.[6]

Current high-definition television (HDTV) systems use video displays with a wider aspect ratio than older television sets, making it easier to accurately display widescreen films. In addition to films produced for the cinema, some television programming is produced in high definition and therefore widescreen.

Letterbox mattes are not necessarily black. IBM has used blue mattes for many of their TV ads,[7] yellow mattes in their "I am Superman" Lotus ads, and green mattes in ads about efficiency & environmental sustainability. Others uses of colored mattes appear in ads from Allstate, Aleve, and Kodak among others, and in music videos such as Zebrahead's Playmate of the Year. In other instances mattes are animated, such as in the music video for Never Gonna Stop (The Red Red Kroovy), and even parodied such as the final scene of the Crazy Frog Axel F music video in which Crazy Frog peeks over the matte on the lower edge of the screen with part of his hands overlapping the matte. Similar to breaking the border of a comic's panel, it is a form of breaking the fourth wall.

The table below shows which TV lines will contain picture information when letterbox pictures are displayed on either 4:3 or 16:9 screens. 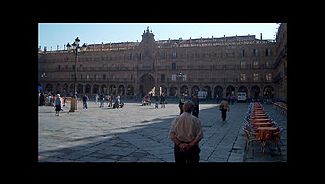 Pillarboxing (reversed letterboxing) is the display of an image within a wider image frame by adding lateral mattes (vertical bars at the sides); for example, a 1.33:1 image has lateral mattes when displayed on a 16:9 aspect ratio television screen.

An alternative to pillarboxing is "tilt-and-scan" (reversed pan and scan), horizontally matting the original 1.33:1 television images to the 1.78:1 aspect ratio, which at any given moment crops part of the top and/or bottom of the frame, hence the need for the "tilt" component. A tilt is a camera move in which the camera tilts up or down.

Windowboxing occurs when an image appears centered in a television screen, with blank space on all four sides of the image,[8][9] such as when a widescreen image that has been previously letterboxed to fit 1.33:1 is then pillarboxed to fit 16:9. It is also called "matchbox", "gutterbox", and "postage stamp" display.[10] This occurs on the DVD editions of the Star Trek films on a 4:3 television when the included widescreen documentaries show footage from the original television series. It is also seen in The Crocodile Hunter: Collision Course, which displays widescreen pillarboxing with 1.85:1 scenes in a 2.40:1 frame that is subsequently letterboxed. It is common to see windowboxed commercials on HD television networks, because many commercials are shot in 16:9 but distributed to networks in SD, letterboxed to fit 1.33:1.

Many 1980s 8-bit home computers feature gutterboxing display mode, because the TV screens normally used as monitors at that time tended to distort the image near the border of the screen, to such an extent that text displayed in that area became illegible. Moreover, due to the overscanned nature of television video, the precise edges of the visible area of the screen varied from television set to television set, so characters near the expected border of the active screen area might be behind the bezel or off the edge of the screen. The Commodore 64, VIC-20, and Commodore 128 (in 40-column mode) featured coloured gutterboxing of the main text window, while the Atari 8-bit family featured a blue text window with a black border. The original IBM PC CGA display adapter was the same, and the monochrome MDA, the predecessor of the CGA, as well as the later EGA and VGA, also featured gutterboxing; this is also called underscanned video. The Fisher-Price PXL-2000 camcorder of the late 1980s recorded a windowboxed image to compensate partially for low resolution.

Occasionally, an image is deliberately windowboxed for stylistic effect; for example, the documentary-style sequence of the film Rent suggest an older-format camera representing the 4:3 aspect ratio, and the opening sequence of the Oliver Stone film JFK features pillar boxing to represent the 1960s era 4:3 television footage. The film Sneakers uses a windowboxing effect in a scene for dramatic effect.