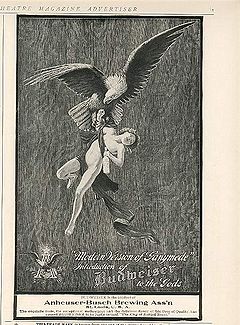 Ad campaign featuring Ganymede bringing Bud to the Gods, based on a drawing by F. Kirchbach. The original Anheuser-Bush ad as it appeared in the February 1906 issue of Theatre Magazine. The slogan on the sign reads: "Modern Version of Ganymede" Introduction of Budweiser Beer to the Gods.

Advertising slogans are short, often memorable phrases used in advertising campaigns. They are claimed to be the most effective means of drawing attention to one or more aspects of a product. A strapline is a British term used as a secondary sentence attached to a brand name. Its purpose is to emphasize a phrase that the company wishes to be remembered by, particularly for marketing a specific corporate image or connection to a product or consumer base.[1]

Some slogans are created just for specific campaigns for a limited time; some are intended as corporate slogans, to be used for an extended period; some slogans start out as the former, and find themselves converted to the latter because they take hold with the public, and some are memorable many years after their use is discontinued.

Taglines, tag lines, or tags are American terms for short advertising slogans. In the UK they are called end lines, endlines, or straplines. In Belgium they are called baselines. In France they are signatures. In Germany they are claims. In the Netherlands and Italy, they are pay offs or pay-offs.[2]