Fredericksburg is an independent city in the Commonwealth of Virginia located 49 miles (79 km) south of Washington, D.C., and 58 miles (93 km) north of Richmond. As of the 2010 census, the city had a population of 24,286[3]. The Bureau of Economic Analysis combines the city of Fredericksburg with neighboring Spotsylvania County for statistical purposes.

Fredericksburg is the commercial hub of a rapidly growing region in northern Central Virginia, and is the largest city between Richmond and the Metro Washington area. Major commercial centers include Central Park (as of 2004, the second-largest mall on the East Coast) and Spotsylvania Towne Centre, located in Spotsylvania County adjacent to the city line. Major employers include the University of Mary Washington and Mary Washington Hospital. Many Fredericksburg-area residents commute to work by car, bus, and rail to Richmond, Fairfax, Prince William County, and Arlington, as well as Washington, D.C. This has led to Fredericksburg becoming a part of Northern Virginia not only geographically, but also culturally.[5][6][7][8]

Located on the Rappahannock River near the head of navigation at the fall line, Fredericksburg developed as the frontier of colonial Virginia shifted west out of the coastal plain. The land on which the city was founded was part of a tract patented in 1671. The Virginia General Assembly established a fort on the Rappahannock in 1676, just below the present-day city. In 1714, Lt. Gov. Alexander Spotswood sponsored a German settlement called Germanna on the Rapidan River, a tributary of the Rappahannock upstream from the future site of the city, and led an expedition westward over the Blue Ridge Mountains in 1716.

As interest in the frontier grew, the colonial assembly responded by forming a new county named Spotsylvania (after the governor) in 1720 and establishing Fredericksburg in 1728 as a port for the county, of which it was then a part. Named for Frederick, Prince of Wales, son of King George II, the colonial town's streets bore the names of members of the royal family. The county court was moved to Fredericksburg in 1732, and the town served as county seat until 1780, when the courthouse was moved closer to the county center. Fredericksburg was incorporated as a town, with its own court, council, and mayor, in 1781. It received its charter as an independent city in 1879. The city adopted its present city manager/council form of government in 1911.

The city has close associations with George Washington, whose family moved to Ferry Farm in Stafford County just off the Rappahannock River opposite Fredericksburg in 1738. Washington's mother Mary later moved to the city, and his sister Betty lived at Kenmore, a plantation house then outside the city. Other significant early residents include the Revolutionary War generals Hugh Mercer and George Weedon, naval war hero John Paul Jones, and future U.S. president James Monroe. Thomas Jefferson wrote the Virginia Statute for Religious Freedom in Fredericksburg.

The city's development and success was based on other significant residents, enslaved Africans with varied skills, who were critical to its growth. "Slaves worked on plantations, on the docks, in iron industries, mining and quarries, mercantile businesses, construction, domestic services, and others were skilled blacksmiths, coopers, cobblers, and draymen. African Americans were vital in the development of the area."[9]

During the 19th century, Fredericksburg sought to maintain its sphere of trade but with limited success. It promoted the development of a canal on the Rappahannock and construction of a turnpike and plank road to bind the interior country to the market town. By 1837, a north-south railroad, which became the Richmond, Fredericksburg and Potomac Railroad, linked the town to Richmond, the state capital. A much-needed railroad joining the town to the farming region to the west was not finished until after the Civil War. 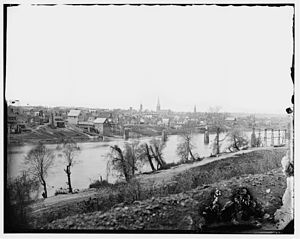 Fredericksburg, Virginia, March 1863. View from across the Rappahannock River. To the right is the steeple of the Baptist Church and toward the center is the tower of St. George's Church.

During the Civil War, Fredericksburg gained strategic importance due to its location midway between Washington and Richmond, the opposing capitals of the Union and the Confederacy. During the Battle of Fredericksburg, December 11–15, 1862, the town sustained significant damage from bombardment and looting by the Union forces. A Second Battle of Fredericksburg was fought in and around the town on May 3, 1863, in connection with the Chancellorsville campaign (April 27, 1863 – May 6, 1863). The battles of the Wilderness and Spotsylvania Court House were fought nearby in May 1864.

The power chord of modern guitar was first developed by Link Wray in Fredericksburg in 1958 during his first improvisation of the instrumental piece "Rumble", a single released by Wray & His Ray Men.[10] The local music scene includes a wide variety of genres.

According to the United States Census Bureau, the city has a total area of 10.5 square miles (27 km2). None of the area is covered with water. The city is part of the boundary between the Piedmont and Tidewater regions, and as such is located on the fall line, as evidently seen on the Rappahannock River. US-1, US-17, and I-95 all pass through the city, which is located approximately 49 miles (79 km) from Washington, D.C.

Fredericksburg has a four-season humid subtropical climate (Köppen Cfa), with slightly cool winters and hot, humid summers. Note that some of the statistics for the city centre may be different than what is presented below due to the park location of the station used.

There were 8,102 households out of which 21.6% had children under the age of 18 living with them, 31.8% were married couples living together, 13.1% had a female householder with no husband present, and 51.6% were non-families. 39.2% of all households were made up of individuals and 12.8% had someone living alone who was 65 years of age or older. The average household size was 2.09 and the average family size was 2.81.

The Fredericksburg Police Department tracks crime information under the state-level system of the Uniform Crime Reporting program. Developed and administered by the Federal Bureau of Investigation, the UCR program provides a nationwide view of crime based on the submission of statistical data from law enforcement agencies across the country. Per State code, the central repository for crime statistics rests with the Department of State Police, which compiles data from all of the participating agencies into an annual publication. The crime information is collected under the National Incident Based Reporting System format, which standardizes the crime data captured for each single incident and arrest within the offense categories. Crime in Virginia 2010

Despite recent decades of suburban growth, reminders of the area's past abound. The 40-block Fredericksburg Historic District, on the National Register of Historic Places, embraces the city's downtown area and contains more than 350 buildings dating to the 18th and 19th centuries. Crowds of tourists are drawn to the historic district of Fredericksburg during the summer months.

Within the historic district, four 18th-century historic sites are run by Preservation Virginia: the Mary Washington House, where George Washington's mother spent her final years; the late 18th century Rising Sun Tavern and the Hugh Mercer Apothecary Shop (the fourth is only open on Historic Garden Week. Sites from the 19th century include the James Monroe Law Office Museum. Important public buildings include the 1852 courthouse designed by James Renwick, whose works include the Smithsonian Institution's castle building in Washington and St. Patrick's Cathedral in New York City, and the 1816 town hall and market house. The latter building now houses the Fredericksburg Area Museum and Cultural Center. Another site of interest is St. George's Church.

Nearby the historic district is Kenmore, the plantation home of Washington's sister Betty and her husband patriot Fielding Lewis.

Notable 20th-century sites and structures include the campus of the University of Mary Washington (begun in 1911), and Carl's Ice Cream, an Art Moderne roadside ice cream stand on the National Register of Historic Places on Route 1.

Nearby points of interest include Ferry Farm historic site in Stafford County where Washington spent his boyhood immediately across the river from Fredericksburg, and the George Washington Birthplace National Monument, located 38 miles to the east in Westmoreland County. The historic community of Falmouth lies across the Rappahannock to the north and includes the historic house Belmont, home of American Impressionist artist Gari Melchers.

Public parks run by the city include:[13] 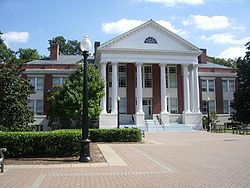 Monroe Hall, built in 1911, at the University of Mary Washington.

The Fredericksburg City Public Schools are run independent of the surrounding counties. The public primary and secondary schools include:[15]

The University of Mary Washington, established in 1908 and opening in 1911, is a four-year public university within the city.

Fredericksburg's daily newspaper is The Free Lance–Star. The Free Lance was first published in 1885, and competed with two twice-weekly papers in the city during the late 19th century, the Fredericksburg News and The Virginia Star. While the News folded in 1884, the Star company began publishing the Daily Star in 1893. In 1900, the two companies merged, with both newspapers continuing publication until 1926, when they merged under the present title. Since that time, the Free Lance–Star has been owned and operated by members of the Rowe family of Fredericksburg.

In 2001, the Arbitron media service began listing the Fredericksburg area as a nationally rated radio market. As of the fall of 2005, the area ranked 154th out of 297 markets surveyed, with a total market population of more than 280,000. Large broadcast companies like Clear Channel Communications and Cumulus Broadcasting are not active in the local market; almost all of its stations remain locally or regionally owned.

There are no professional sports teams in Fredericksburg, however, there are a number of amateur and academic teams. Sports at the secondary education are run through the Virginia High School League. On the collegiate level are the University of Mary Washington Eagles. Other amateur athletics include the Fredericksburg Hotspur[16] of United Soccer Leagues Premier Development League (PDL); and the Rappahannock Rugby Club a senior men's rugby club competing in Division III of the Potomac Rugby Union.

Fredericksburg is traversed by a series of rural and suburban four-lane highways and a multitude of small, two-lane roads. Among the major arterial roads is U.S. Route 1, providing north-south transportation from the region to Stafford, Washington D.C., and points beyond. Route 3 (Plank Road) is a major east-west route that connects downtown Fredericksburg (via the Blue and Gray Parkway bypass), southern Stafford and King George counties, and Route 301 with the large shopping centers, Spotsylvania Town Center and Central Park. To the west, Route 3 reaches Culpeper, where it meets Route 29 and Route 15.

Most of Fredericksburg's traffic flow is to or from the north (Washington D.C. metropolitan area) during peak commuting hours, primarily via Interstate 95 and US-1. The US-1 bridge over the Rappahannock River is often a traffic bottleneck, and Route 3 has become increasingly jammed as residential development has grown west. 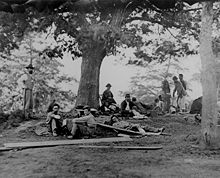 Wounded soldiers being tended at Marye's House in Fredericksburg in May 1864. (Sometimes mistakenly labeled as taken in the field after the Battle of Chancellorsville, May 2, 1863). 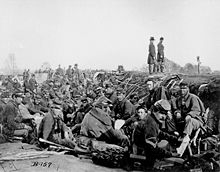 American Civil War: Union Army Soldiers of 6th Corps, Army of the Potomac, in trenches before storming Marye's Heights at the Second Battle of Fredericksburg during the Chancellorsville campaign, Virginia, May 1863. (#B-157) Sometimes mistakenly labeled as taken at siege of Petersburg, Virginia

18th century and before