Ely Cathedral (in full, The Cathedral Church of the Holy and Undivided Trinity of Ely) is the principal church of the Diocese of Ely, in Cambridgeshire, England, and is the seat of the Bishop of Ely and a suffragan bishop, the Bishop of Huntingdon. It is known locally as "the ship of the Fens", because of its prominent shape that towers above the surrounding flat and watery landscape.

Most of what is known about the early history of Ely comes from Bede's Historia ecclesiastica gentis Anglorum and above all from the Liber Eliensis, an anonymous chronicle written at Ely some time in the 12th century and covering the history of the Abbey and Cathedral from 673 until the mid-12th century.

See also: List of abbots and abbesses of Ely

The first Christian building on the site was founded by St. Æthelthryth (romanised as "Etheldreda"), daughter of the Anglo-Saxon King Anna of East Anglia, who was born in 630 at Exning near Newmarket.[2] She may have acquired land at Ely from her first husband Tondberht, described by Bede as a "prince" of the South Gyrwas.[3] After the end of her second marriage to Ecgfrith, a prince of Northumbria, she set up and ruled a monastery at Ely in 673, and, when she died, a shrine was built there to her memory. The monastery is traditionally believed to have been destroyed in the Danish invasions of the late 9th century, together with what is now the city. However, while the lay settlement of the time would have been a minor one, it is likely that a church survived there until its refoundation in the 10th century.[4]

A new Benedictine monastery was built and endowed on the site by Athelwold, Bishop of Winchester, in 970, in a wave of monastic refoundations which locally included Peterborough and Ramsey.[5] This became a cathedral in 1109, after a new Diocese of Ely was created out of land taken from the Diocese of Lincoln.

The cathedral is built from stone quarried from Barnack in Northamptonshire (bought from Peterborough Abbey, whose lands included the quarries, for 8000 eels a year), with decorative elements carved from Purbeck Marble and local clunch. The plan of the building is cruciform (cross-shaped), with an additional transept at the western end. The total length is 537 feet (163.7 m),[6] and the nave at over 75 m long (250 ft) remains one of the longest in Britain. The west tower is 66m high (215 ft). The unique Octagon 'Lantern Tower' is 23 m (74 ft) wide and is 52 m (170 ft) high. Internally, from the floor to the central roof boss the lantern is 43 m (142 ft) high.

The present cathedral was started by Abbot Simeon (1082–1094, brother of Walkelin, the then bishop of Winchester) under William I in 1083. Building continued under Simeon's successor, Abbot Richard (1100–1107). The Anglo-Saxon church was demolished, but some of its relics, such as the remains of its benefactors, were moved to the cathedral. The main transepts were built early on, crossing the nave below a central tower, and are the oldest surviving part of the cathedral. Construction work continued throughout the 12th century. The Western transepts and tower were completed under Bishop Ridel (1174–89) in an exuberant Romanesque style with a rich decoration of intersecting arches and complex mouldings.

A Galilee porch was added under Bishop Eustace (1198–1215) in the Early English Gothic style. It was originally a two-storey structure (it was opened up into a single vaulted space in the 18th century) where liturgical processions could gather before entering the nave. Several details of its decoration, particularly the 'syncopated arches' and the use of Purbeck marble shafts, reflect the influence of St Hugh's Choir at Lincoln Cathedral, built a few years earlier.

Under Bishop Northwold, work began on a new eastern end in 1234, replacing the short Norman chancel with a much grander 10-bay structure. Northwold's chancel, completed by around 1252, adopted several of the stylistic elements already used in the Galilee porch.

In 1321, under the sacrist Alan of Walsingham work began on a massive (100' long by 46' wide) free-standing Lady Chapel, linked to the north transept and the north aisle of the chancel by covered walkways. This new structure was built in an exuberant 'Decorated' Gothic style. Around most of the wall surface are sedilia-like niches, flanked by pilasters of Purbeck marble and covered by sinuous ogee arches which project forward away from the wall (sometimes known as 'knodding ogees'). Most wall surfaces are covered with richly carved vegetal and diaper patterns which were originally brightly polychromed. An extensive sculpted Life of the Virgin cycle originally filled the spandrels between the niches but this was severely damaged by iconoclasts (either following the Dissolution of the Monasteries or by Puritans during the English Civil War - historians still disagree over which).

In February 1322, possibly as a result of instabilities caused by the digging of the foundations for the Lady Chapel, the great Norman crossing tower collapsed, injuring nobody but damaging the first four bays of Bishop Northwold's Early Gothic choir. These western bays of the liturgical choir were rebuilt in a more modern style. More noticeably, the old crossing tower was replaced by an innovative octagonal lantern. Although it is supported on eight massive masonry piers, the lantern itself is constructed from oak timbers and was designed by William Hurley, who later became Master Carpenter to the King at Westminster. Because the crossing was a key part of the liturgical choir, this rebuilding work took priority over other activities and the lantern was largely complete by 1340. The windows on the sides of the upper octagon are a particularly successful way of lighting the centre of the cathedral. The angels painted below the windows are however purely Victorian inventions, a product of the restoration under Thomas Gambier Parry in 1874. When built, the Octagon was the largest crossing span in northern Europe and remains Ely Cathedral's most distinctive feature, visible from miles around across the Fens.

Dating from the early 16th century is a set of 44 misericords.

In 1539, during Henry VIII's Dissolution of the Monasteries, the cathedral suffered only minor damage, but St Etheldreda's shrine was destroyed. The cathedral was soon refounded in 1541, although many of the statues in the lady chapel were severely damaged.

The Bishop of Ely in the mid 17th century was Matthew Wren and in connection with this, his nephew Christopher Wren was responsible for a rather splendid Gothic door, dating from the 1650s, on the north face of the cathedral.

The building has been the subject of several major restoration projects: 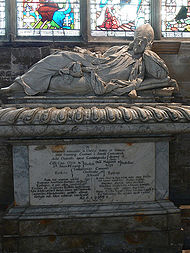 The south gallery of the nave is home to The Stained Glass Museum, a collection of stained glass from the 13th century to the present that is of national importance and includes works from notable contemporary artists including Ervin Bossanyi. 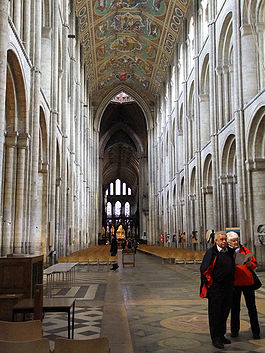 Ely has a cathedral choir of boys and men, which has recently attracted international attention because of its association with The Choirboys: two of its members, Patrick Aspbury and CJ Porter-Thaw, are choristers at the cathedral. Boys are educated in the junior department of The King's School, Ely.

The cathedral community also has an adult voluntary choir, The Ely Cathedral Octagon Singers and a children's choir The Ely Imps.

Details of the organ from the National Pipe Organ Register

The pipes of Ely Cathedral's Organ

The Chapter is assisted by the Minor Canons and Priest Vicars: 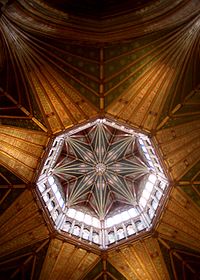 The Lantern from the interior.