Chelmsford Cathedral in the county town of Chelmsford, Essex, England is dedicated to St Mary the Virgin, St Peter and St Cedd. It became a cathedral when the Anglican Diocese of Chelmsford was created in 1914 and is the seat of the Bishop of Chelmsford.[1] 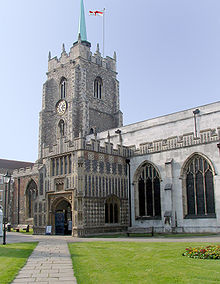 The church of St Mary the Virgin in Chelmsford was probably first built along with the town eight hundred years ago. It was rebuilt in the 15th and early 16th centuries, with walls of flint rubble, stone and brick. There is also a tower and spire with a ring of thirteen bells, 12 of which were cast by John Warner and Sons at Cripplegate. The nave was again rebuilt in the early 19th century, after it had partially collapsed. The stained-glass windows were all installed in the 19th and 20th centuries. The south porch was extended in 1953 to mark Anglo-American friendship after the World War II and the many US airmen stationed in Essex. In 1954, the cathedral was additionally dedicated to Saints Peter and Cedd. In 1983, the interior of the cathedral was extensively refurbished, with a new floor, seating, altar, Bishop's throne, font and artwork. In 1994 and 1995 two pipe organs were installed, the first in the nave and the second in the chancel.

In 2000 a sculpture of "Christ in Glory", by Peter Eugene Ball, was placed above the chancel arch.

In 2004 two further major works of art were commissioned, and are now in place: Mark Cazelet's "Tree of Life" painting in the North Transept, and Philip Sanderson's altar frontal in the Mildmay Chapel.

The cathedral celebrates its links with Thomas Hooker, who was Chelmsford Town Lecturer between 1626 and 1629. He fled to the New World because of his Puritan views and founded the town of Hartford, Connecticut and was one of the founders of American democracy.

The cathedral enjoys close links with The Cathedral School, St Cedd's School, King Edward VI Grammar School and Chelmsford County High School for Girls. Many of the cathedral's boy and girl choristers attend these schools. On 7 February 2000, whilst the Dean, The Very Reverend Peter Judd was Chairman of Governors, The Cathedral School became the first school in England and Wales to be threatened with a S15. Warning Notice under the Schools Standard and Framework Act because of the threat to pupil safety from the school's failure to follow the required child protection procedures.

A specification of the organs can be found at the National Pipe Organ Register.

See also the List of Organ Scholars at Chelmsford Cathedral.