Thomas Hooker (July 5, 1586 – July 7, 1647) was a prominent Puritan colonial leader, who founded the Colony of Connecticut after dissenting with Puritan leaders in Massachusetts. He was known as an outstanding speaker and a leader of universal Christian suffrage.

Called today “the Father of Connecticut,” Thomas Hooker was a towering figure in the early development of colonial New England. He was one of the great preachers of his time, an erudite writer on Christian subjects, the first minister of Cambridge, Massachusetts, one of the first settlers and founders of both the city of Hartford and the state of Connecticut, and cited by many as the inspiration for the "Fundamental Orders of Connecticut," cited by some as the world's first written democratic constitution that established a representative government.[2]

Most likely coming out of the county of Leicestershire, in the East Midlands region, the Hooker family was prominent at least as far back as the reign of Henry VIII. There is known to have been a great Hooker family in Devon (colloquially called Devonshire, in the middle of the southwestern peninsula), well-known throughout Southern England. The Devon branch produced the great theologian and clergyman, the Rev. Richard Hooker who, with Sir Walter Raleigh, was one of the two most influential sons of Exeter, the county town of Devon. Family genealogist Edward Hooker linked the Rev. Thomas to the Rev. Richard and the Devon branch. Other Hooker genealogists, however, have traced the Rev. Thomas back to Leicestershire where, in fact, he is said to have been born. Positive evidence linking Thomas to Leicestershire is lacking since the Marefield parish records from before 1610 perished. Any link to the Rev. Richard is likewise lacking since the Rev. Thomas’s personal papers were disposed of and his house destroyed after his death. There remains no evidence giving positive information as to which region Hooker came from, so the issue remains unsettled.[3]

Thomas Hooker was likely born at Marefield or Birstall, Leicestershire,[4] and went to school at Market Bosworth.[5] He received his Bachelors of Arts from Emmanuel College, Cambridge in 1608, continuing there to earn his Masters of Arts in 1611.[5][6][7] He stayed at Emmanuel as a fellow for a few years.[5] After his stay at Emmanuel, Hooker preached at the Esher parish, where he earned a reputation as an excellent speaker.[5][7]

Around 1626, Hooker became a lecturer at the Chelmsford Cathedral.[5] However, in 1629 Archbishop William Laud suppressed church lecturers, and Hooker was forced to retire to Little Baddow.[5] His leadership of Puritan sympathizers brought him a summons to the Court of High Commission. Forfeiting his bond, Hooker fled to Rotterdam, Holland,[7] and from there immigrated to Massachusetts Bay Colony aboard the Griffin.[1][5]

Hooker arrived in Boston and settled in Newtown (later renamed Cambridge), where he became the pastor of the First Parish Church. His parish became known as "Mr. Hooker's Company".[5] 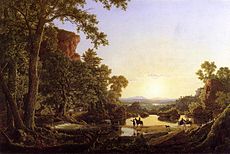 Hooker and Company Journeying through the Wilderness from Plymouth to Hartford, in 1636, Frederic Edwin Church, 1846

Voting in Massachusetts was limited to freemen, individuals who had been formally admitted to their church after a detailed interrogation of their religious views and experiences. Hooker disagreed with this limitation of suffrage, putting him at odds with the influential pastor John Cotton. Owing to his conflict with Cotton and discontented with the suppression of Puritan suffrage and at odds with the colony leadership,[7] Hooker and the Rev. Samuel Stone led a group of about 100[8] who, in 1636, founded the settlement of Hartford, named for Stone’s place of birth: Hertford, in England.[9]

This led to the founding of the Connecticut Colony.[5][10] Hooker became more active in politics in Connecticut. The General Court representing Wethersfield, Windsor and Hartford met at the end of May 1638 to frame a written constitution in order to establish a government for the commonwealth. Hooker preached the opening sermon at First Church of Hartford on May 31, declaring that "the foundation of authority is laid in the free consent of the people."[11]

On January 14, 1639, freemen from these three settlements ratified the "Fundamental Orders of Connecticut" in what John Fiske called "the first written constitution known to history that created a government. It marked the beginnings of American democracy, of which Thomas Hooker deserves more than any other man to be called the father. The government of the United States today is in lineal descent more nearly related to that of Connecticut than to that of any of the other thirteen colonies."[12]

In recognition of this, on the wall of the narrow alleyway just outside the grounds near the Chelmsford Cathedral in Chelmsford, Essex, England, where he was town lecturer and curate, there is a Hooker Memorial Civic Plaque fixed high on the wall of the narrow alleyway, opposite the south porch, that reads: "Thomas Hooker, 1586 - 1647, Curate at St. Mary’s Church and Chelmsford Town Lecturer 1626-29. Founder of the State of Connecticut, Father of American Democracy."[13]

The Rev. Hooker died during an "epidemical sickness" in 1647, at the age of 61. The location of his grave is unknown, although he is believed to be buried in Hartford's Ancient Burying Ground. Because there was no known portrait of him, the statue of him that stands nearby, in front of Hartford’s Old State House, was sculpted from the likenesses of his descendants. However, the city is not without a sense of humor regarding its origins. Each year, organizations and citizens of Hartford dress up in outrageous costumes to celebrate Hooker Day with the Hooker Day Parade. T-shirts sold in the Old State House proclaim "Hartford was founded by a Hooker."[14] 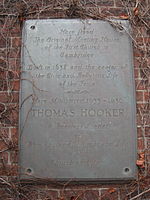 Thomas Hooker strongly advocated extended suffrage to include Puritan worshipers, a view which would lead him and his followers to colonize Connecticut.[5] He also promoted the concept of a government that must answer to the people, stating: "[T]hey who have the power to appoint officers and magistrates, it is in their power, also, to set the bounds and limitations of the power and place unto which they call them" through "the privilege of election, which belongs to the people according to the blessed will and law of God".[5] Thomas Hooker argued for greater religious tolerance towards all Christian denominations.[15]

Hooker defended the calling of synods by magistrates, and attended a convention of ministers in Boston whose purpose was to defend Congregationalism.[5] He later published A Survey of the Summed of Church-Discipline in defense of Congregationalism, and applied its principles to politics and government.[7]

Thomas Hooker was a strong leader of the contrition doctrine. He believed that much of God's favor needed to be re-earned by men.[16] To Hooker, sin was the most crafty of enemies, defeating grace on most occasions. He disagreed with many of the predecessor theologies of Free Grace theology, preferring a more muted view on the subject. He focused on preparation for heaven and following the moralist character.[16] 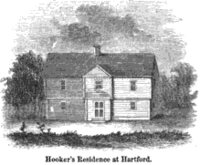 Thomas Hooker came to the colonies with his second wife, Suzanne. Nothing is known of his first wife.

His son Samuel, likely born at Cambridge, Massachusetts, graduated from Harvard College in 1653. He became the well-known minister of Farmington, Connecticut, where his descendants lived for many generations.[notes 1] Of Rev. Samuel Hooker, Cotton Mather wrote in Magnalia Christi Americana: "Thus we have to this day among us our dead Hooker, yet living in his worthy son Samuel Hooker, an able, faithful, useful minister at Farmington, in the Colony of Connecticut."