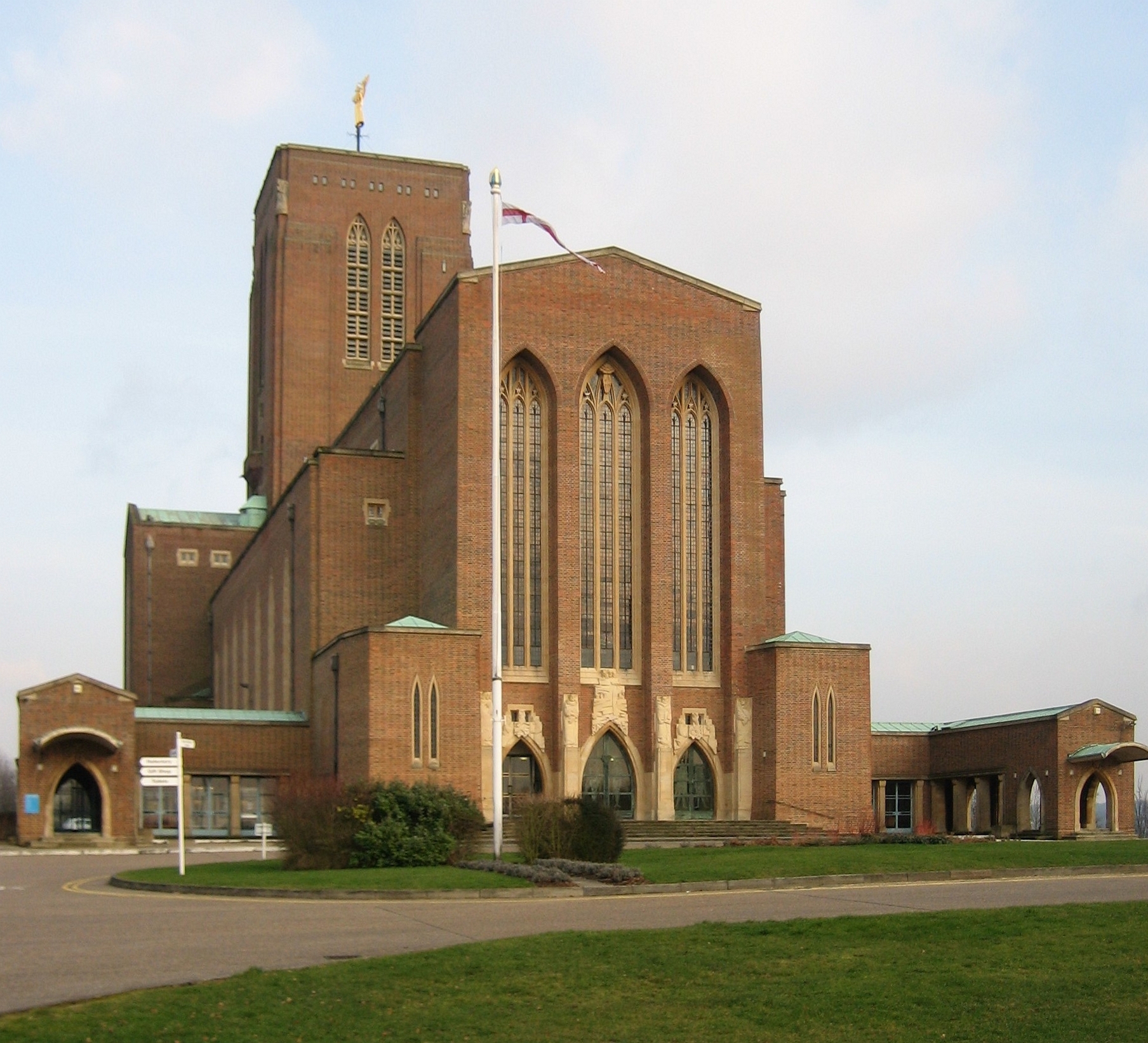 It stands in a commanding spot on Stag Hill - so named because the Kings of England used to hunt here - and its solid red brick outline is visible for miles around; it immediately overlooks the beneath it. Its bricks are made from clay taken from the hill on which it stands.

The tower is convert|160|ft|m high, and contains twelve bells, ten of which were cast by Mears and Stainbank in 1965. The bells were augmented to 12 with two Whitechapel trebles in 1975. The largest bell weighs 30cwt and is tuned to the key of D. At the top of the tower stands a convert|15|ft|m|sing=on gilded angel, which turns in the wind. Inside, the cathedral appears to be filled with light, with pale pillars and white Italian floors.

Writing in 1932, Sir Edward Maufe said: ‘The ideal has been to produce a design, definitely of our own time, yet in the line of the great English Cathedrals; to build anew on tradition, to rely on proportion, mass, volume and line rather than on elaboration and ornament.' described the building as 'sweet-tempered, undramatic Curvilinear Gothic', and that the interior was 'noble and subtle.'

Scenes from the classic horror film "" were filmed at the Cathedral.

The Angel on the top of the tower was given in memory of of the Intelligence Corps, who died on active service on 5th January 1944.Fact|date=April 2007 The Angel also doubles up as a mobile phone mast for T-Mobile.Fact|date=September 2008

On Thursday , Queen Elizabeth II visited Guildford Cathedral as part of the celebrations before going for lunch with the in the Guildhall.

The nearby holds graduation ceremonies for its students at the Cathedral, its location makes this ideal as the students can walk from the campus to the Cathedral. During the graduation services the Cathedral is treated as a secular building.

In September 2007, the Cathedral was granted status by the .

The Cathedral participated in 2008 by switching off its floodlights.

* [http://www.guildford-cathedral.org/ Official website]
* [http://www.ofchoristers.net/Chapters/Guildford.htm A history of the choristers of Guildford Cathedral]