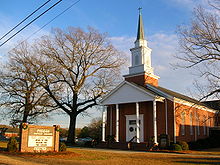 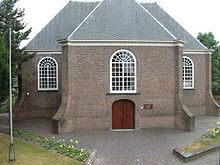 In the Christian religion, a church building is a building or structure whose primary purpose is to facilitate the meeting of a church. Originally, Jewish Christians met in synagogues, such as the Cenacle, and in one another's homes, known as house churches. As Christianity grew and became more accepted by governments, notably with the Edict of Milan, rooms and, eventually, entire buildings were set aside for the explicit purpose of Christian worship, such as the Church of the Holy Sepulchre. 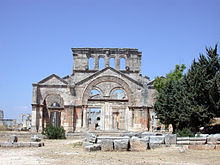 The Church of Saint Simeon Stylites in Aleppo, Syria is considered to be one of the oldest surviving church buildings in the world.
See also: Jerusalem in Christianity

The first Christians were, like Jesus, Jews resident in Israel who worshiped on occasion in the Temple in Jerusalem and weekly in local synagogues. Temple worship was a ritual involving sacrifice, occasionally including the sacrifice of animals in atonement for sin, offered to the God of Israel. The New Testament includes many references to Jesus visiting the Temple, the first time as an infant with his parents, see Presentation of Jesus at the Temple. The early history of the synagogue is obscure, but it seems to be an institution developed for public Jewish worship during the Babylonian captivity when the Jews (and Jewish Proselytes) did not have access to a Temple (the First Temple having been destroyed c. 586 BC) for ritual sacrifice. Instead, they developed a daily and weekly service of readings from the Torah, and possibly also the Prophets, followed by commentary. This could be carried out in a house if the attendance was small enough, and in many towns of the Diaspora that was the case. In others, more elaborate architectural settings developed, sometimes by converting a house and sometimes by converting a previously public building. The minimum requirements seem to have been a meeting room with adequate seating, a case for the Torah scroll, and a raised platform for the reader.

Jesus himself participated in this sort of service as a reader and commentator (see Gospel of Luke 4:16–24) and his followers probably remained worshipers in synagogues in some cities, for example the Cenacle in Jerusalem. However, following the destruction of the Second Temple in Jerusalem in 70 AD, the new Christian movement and Rabbinic Judaism increasingly parted ways, see also List of events in early Christianity. The Church became overwhelmingly Gentile sometime in the 4th century, the era of Constantine I and Christianity and the birth of the State church of the Roman Empire.

The Syrian city of Dura-Europos on the West bank of the Euphrates was an outpost town between the Roman and Parthian empires. During a siege by Parthian troops in A.D. 257, the buildings in the outermost blocks of the city grid were partially destroyed and filled with rubble to reinforce the city wall. Thus were preserved and securely dated an early decorated church and a synagogue decorated with extensive wall paintings. Both had been converted from earlier private buildings.

The Dura-Europos church from 235 AD has a special room dedicated for baptisms with a large baptismal font. 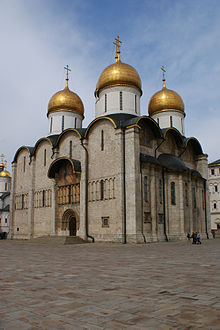 During the 11th through 14th centuries, a wave of building of cathedrals and smaller parish churches occurred across Western Europe. In addition to being a place of worship, the cathedral or parish church was used by the community in other ways. It could serve as a meeting place for guilds or a hall for banquets. Mystery plays were sometimes performed in cathedrals, and cathedrals might also be used for fairs. The church could be used as a place to thresh and store grain.[1] 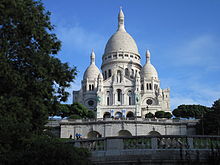 A common architecture for churches is the shape of a cross (a long central rectangle, with side rectangles, and a rectangle in front for the altar space or sanctuary). These churches also often have a dome or other large vaulted space in the interior to represent or draw attention to the heavens. Other common shapes for churches include a circle, to represent eternity, or an octagon or similar star shape, to represent the church's bringing light to the world. Another common feature is the spire, a tall tower on the "west" end of the church or over the crossing.

The Latin word basilica (derived from Greek, Basiliké Stoà, Royal Stoa), was originally used to describe a Roman public building (as in Greece, mainly a tribunal), usually located in the forum of a Roman town.

After the Roman Empire became officially Christian, see Edict of Thessalonica, the term came by extension to refer to a large and important church that has been given special ceremonial rites by the Pope. Thus the word retains two senses today, one architectural and the other ecclesiastical.

A cathedral is a church, usually Roman Catholic, Anglican, Oriental Orthodox or Eastern Orthodox, housing the seat of a bishop. The word cathedral takes its name from the word cathedra, or Bishop's Throne (In Latin: ecclesia cathedralis). The term is sometimes (improperly) used to refer to any church of great size.

The church that has the function of cathedral is not of necessity a large building. It might be as small as Christ Church Cathedral in Oxford, England, Sacred Heart Cathedral in Raleigh, United States, or Chur Cathedral in Switzerland. But frequently, the cathedral, along with some of the abbey churches, was the largest building in any region.

Old and disused church buildings can be seen as an interesting proposition for developers as the architecture and location often provide for attractive homes[2][3] or city centre entertainment venues[4] On the other hand, many newer Churches have decided to host meetings in public buildings such as schools,[5] universities,[6] cinemas[7] or theatres.[8]

There is another trend to convert old buildings for worship use rather than face the construction costs and planning difficulties of a new build. Unusual venues in the UK include an old Tram power station,[9] a former bus garage,[10] an old cinema and bingo hall,[11] a former Territorial Army Drill Hall,[12] a former synagogue[13] and a windmill.