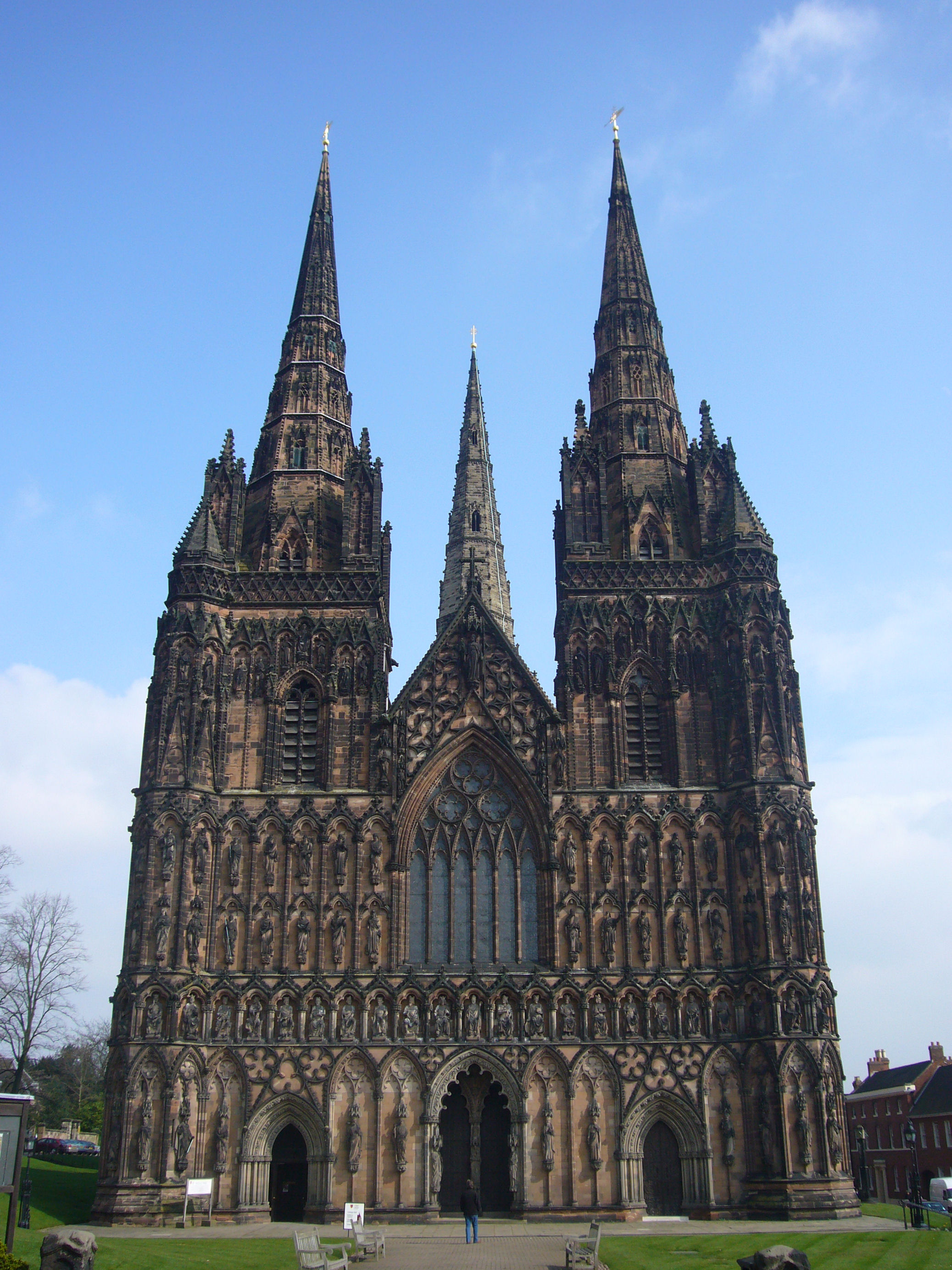 Lichfield Cathedral is situated in , , . It is the only medieval English cathedral with three spires. The covers all of , much of and part of the and West Midlands. The present bishop is the Right Reverend , the 98th Lord Bishop of Lichfield.

The stone is and came from a quarry on the south side of Lichfield. The walls of the nave lean outwards slightly, due to the weight of stone used in the ceiling vaulting, some 200&ndash;300 tons of which was removed during renovation work to prevent the walls leaning further.

Lichfield suffered untold damage during the Civil War in which all of the stained glass was destroyed. However, the windows of the contain some of the finest Flemish painted glass in existence. It came from the of (now in ) in 1801 having been purchased by when that abbey was dissolved during the . It was then sold on to the cathedral for the same price. It dates from the 1530s. There are also some fine windows by Betton and Evans (1819), and many fine late 19th century windows, particularly those by .

The are the gospels of Matthew and Mark, and the early part of Luke, written in and dating from around 730. There were originally two volumes but one went missing around the time of the . It is closely related in style to the . The manuscript is on display in the Chapter House from to .

The Close is one of the most complete in the country and includes a medieval courtyard which once housed the men of the . The three spires are often referred to as 'the Ladies of the Vale'.

Within the Cathedral is a tomb with a Latin inscription which, when translated, reads: "This monument is sacred to the memory of Michael Johnson, a man fearless, steady, spirited, regardless of dangers, very patient in labour.... His conversation was so chastised, that neither pain nor pleasure ever led him to utter anything which might offend pious or modest ears." We learn from the epitaph that Johnson was born in Cubley, Derbyshire, in 1656 and died in 1731. Michael Johnson was the father of of Lichfield, later of London. [ [http://books.google.com/books?id=iq9JAAAAMAAJ&pg=PA39&lpg=PA39&dq=%22history+of+the+city+and+cathedral+of+lichfield%22+michael+johnson&source=web&ots=NDJJJVMHWM&sig=jCpu_vamq6U378HxEJjuYXNazPo&hl=en History of the City and Cathedral of Lichfield, John Jackson, London, 1805] ]

History of the Cathedral

Early history and elevation to Archbishopric

When Chad was made in 669 he moved his See from to Lichfield, possibly because this was already a holy site, as the scene of martyrdoms during the Roman period. The first Cathedral to be built on the present site was in 700AD when built a new church to house the bones of which had become a sacred shrine to many pilgrims when he died in 672. , King of seemed to resent his own bishops paying allegiance to the in who, whilst under Offa's control, was not of his own kingdom of Mercia. Offa therefore created his own archbishopric in Lichfield, who presided over all the bishops from the Humber to the Thames. All this began in , with the consent of . The Pope’s official representatives were received warmly by Offa and were present at the (787), often called `the contentious synod', where it was proposed that the Archbishopric of Canterbury be restricted in order to make way for Offa's new archbishop. It was vehemently opposed, but Offa and the papal representatives defeated , installing as the new Archbishop of Lichfield. Pope Adrian sent Higbert the , denoting his support for this move. In gratitude, Offa promised to send an annual shipment of gold to the pope for alms and supplying the lights in St. Peter's church in . However, The Archbishopric of Lichfield only lasted for 16 years, ending soon after Offa's death, when it was restored to Archbishop .

Starting in 1085 and continuing through the twelfth century the original wooden Saxon church was replaced by a Norman Cathedral made from stone, and this was in turn replaced by the present Gothic Cathedral begun in 1195. It was completed by the building of the in the 1330s. The Choir dates from 1200, the s from 1220 to 1240 and the was started in 1260. The octagonal , which was completed in 1249 and is one of the most beautiful parts of the Cathedral with some charming stone carvings, houses an exhibition of the Cathedral's greatest treasure, the Lichfield Gospels, an 8th century illuminated manuscript.

Devastation of the English Civil War

There were three great sieges of Lichfield during the period 1643–1646 as the cathedral was surrounded by a ditch and defensive walls it made a natural fortress. The cathedral authorities with a certain following were for the king, but the townsfolk generally sided with the parliament, and this led to the fortification of the close in 1643. , led an assault against it, but was killed by a deflected bullet from John Dyott (known as 'dumb' because he was a deaf mute) who along with his brother Richard Dyott had taken up a position on the battlements of the central cathedral spire on , . Brooke's deputy Sir John Gell, took over the siege. Although the Royalist garrison surrendered to Gell two days later, the close yielded and was retaken by on of the same year. Rupert's engineers detonated the first mine to be used in England to breach the defences. Unable to defend the breach, the Parliamentarians surrendered to Rupert the following day. The cathedral suffered extensive da
Bishop Hacket began the restoration of the Cathedral in the 1660s, aided by substantial funds donated by the restored monarch, but it was not until the 19th century that the damage caused by the Civil War was fully repaired. Up until the 19th century, on top of an ornamented gable, between the two spires, stood a colossal figure of Charles II, by . Today it stands just outside the south doors.

Although the 18th century was a Golden Age for the City of Lichfield, it was a period of decay for the cathedral. The 15th-century library, on the north side of the nave, was pulled down and the books moved to their present location above the Chapter House. Most of the statues on the West Front were removed and the stonework covered with Roman cement. At the end of the century organised some major structural work, removing the High Altar to make one worship area of Choir and Lady Chapel and adding a massive stone screen at the entrance to the Choir. The ornate west front was extensively renovated in the by Sir . It includes a remarkable number of ornate carved figures of kings, queens and saints, working with original materials where possible and creating fine new imitations and additions when the originals were not available. Wyatt's had utilised medieval stone-work which Scott in turn used to create the clergy's seats in the sanctuary. The new metal screen by and to designs by Scott himself is a triumph of High Victorian art, as are the fine Minton tiles in the choir, inspired by the medieval ones found in the Choir foundations and still seen in the Library.

In February 2003, an eighth century sculpted panel of the Archangel Gabriel was discovered under the nave of the Cathedral. The panel was broken into three parts but was still otherwise intact and had traces of red pigment from the period. It was first unveiled to the public in 2006, when visitor numbers to the Cathedral trebled.After being taken to Birmingham for eighteen months for examination, it is now exhibited in the Cathedral.