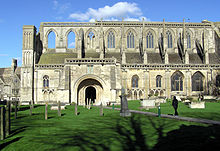 The main entrance (the South Porch) seen from the graveyard. This picture shows the modern extent of the Abbey

Malmesbury Abbey, at Malmesbury in Wiltshire, England, was founded as a Benedictine monastery around 676 by the scholar-poet Aldhelm, a nephew of King Ine of Wessex. In 941 AD, King Athelstan was buried in the Abbey. By the 11th century it contained the second largest library in Europe and was considered one of the leading European seats of learning. It was one of the few English houses with a continual history from the 7th century through to the Dissolution of the Monasteries.[1] It is dedicated to Saint Peter and Saint Paul. The 12th-century historian William of Malmesbury was of the community.

The Abbey was substantially completed by 1180. The 431 feet (131 m) tall spire, and the tower it was built upon, collapsed in a storm around 1500 destroying much of the church, including two thirds of the nave and the transept. The west tower fell around 1550, demolishing the three westernmost bays of the nave. As a result of these two collapses, less than half of the original building stands today.

The Abbey, which owned 23,000 acres (93 km2) in the twenty parishes that constituted Malmesbury Hundred, was closed at the Dissolution of the Monasteries in 1539 by Henry VIII and was sold, with all its lands, to William Stumpe, a rich merchant. He returned the abbey church to the town for continuing use as a parish church, and filled the abbey buildings with twenty looms for his cloth-weaving enterprise.[2] Today Malmesbury Abbey is in full use as the parish church of Malmesbury, in the Diocese of Bristol. The remains still contain a fine parvise which holds some examples of books from the Abbey library. The Anglo-Saxon charters of Malmesbury, though extended by forgeries and improvements executed in the abbey's scriptorium, provide source material today for the history of Wessex and the West Saxon church from the seventh century.

During the English Civil War, Malmesbury is said to have changed hands as many as seven times, and the abbey was fiercely fought over. Hundreds of pock-marks left by bullets and shot can still be seen on the south, west and east sides of Malmesbury Abbey walls. The Abbey was the site of an early attempt at human flight when, in 1010, the monk Eilmer of Malmesbury flew a primitive hang glider from a tower. Eilmer flew over 200 yards (200 m) before landing, breaking both legs. He later remarked that the only reason he did not fly further was the lack of a tail on his glider.

Today much of the Abbey survives. The existing third of the nave has been restored as an active place of worship and there are plans to build a visitor centre on the site. No charge is made for visitors to view the interior of the abbey. Supposedly the first person to be killed by a tiger in England, Hannah Twynnoy, is buried in the churchyard. She was an early 18th century barmaid working in a local public house, killed on October 23, 1703.