Crowland Abbey (also spelled Croyland Abbey) is a Church of England parish church, formerly part of a Benedictine abbey church, in Crowland in the English county of Lincolnshire.[1]

A monk named Guthlac came to what was then an island in the Fens to live the life of a hermit and he dwelt at Croyland between 699 and 714. Following in Guthlac’s footsteps, a monastic community came into being here in the 8th century. Croyland Abbey was dedicated to Saint Mary the Virgin, Saint Bartholomew and Saint Guthlac. During the third quarter of the 10th century, Crowland came into the possession of the nobleman Turketul, a relative of Osketel, Archbishop of York. Turketul, a cleric, became abbot there and endowed the abbey with many estates. It is thought that, about this time, Crowland adopted the Benedictine rule. 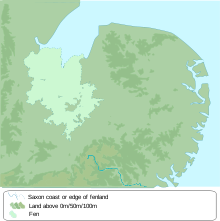 EAST ANGLIA
The location of Croyland Abbey during the 8th century

In 1537, the abbot of Croyland wrote to Thomas Cromwell, sending him a gift of fish: "ryght mekely besechyng yow lordship favorablye to accepte the same fyshe, and to be gud and favorable lorde unto me and my pore house". Despite these representations, the abbey was dissolved in 1539. The monastic buildings, including the chancel, transepts and crossing of the church appear to have been demolished fairly promptly but the nave and aisles had been used as the parish church and continued in that role.

The town was captured after a short siege by Parliamentarian forces in 1643[2] and this appears to have been when very serious damage was done to the structure.  The nave roof fell in 1720, the main south wall was taken down in 1744. The north aisle of the nave was refurbished and remains in use as the parish church.

Crowland is well known to historians as the probable home of the Croyland Chronicle of Pseudo-Ingulf, begun by one of its monks and continued by several other hands.

The church contains a skull which is identified as the skull of the 9th century Abbot Theodore who was killed at the altar by Vikings. The relic used to be on public view until it was stolen from its display case in 1982. The skull was returned anonymously in 1999.

John Clare wrote a sonnet entitled 'Crowland Abbey' which was first published in The Literary Souvenir for 1828 and reprinted in his last book, The Rural Muse in 1835.[3]

The abbey has a small two manual pipe organ. A specification of the organ can be found on the National Pipe Organ Register.[4]