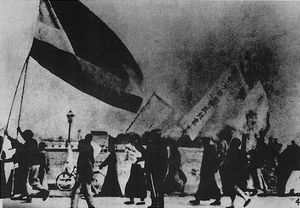 Students in Beijing rallied during the May Fourth Movement.

The May Fourth Movement (traditional Chinese: 五四運動; simplified Chinese: 五四运动; pinyin: Wǔsì Yùndòng) was an anti-imperialist, cultural, and political movement growing out of student demonstrations in Beijing on May 4, 1919, protesting the Chinese government's weak response to the Treaty of Versailles, especially the Shandong Problem. These demonstrations sparked national protests and marked the upsurge of Chinese nationalism, a shift towards political mobilization and away from cultural activities, and a move towards populist base rather than intellectual elites.

The broader use of the term "May Fourth Movement" often refers to the period during 1915-1921 more usually called the New Culture Movement.

Following the Xinhai Revolution in 1911, the Qing Dynasty was overthrown. This marked the end of thousands of years of powerful imperial rule, and theoretically ushered a new era in which political power rested with the people. However, the reality was that China was a fragmented nation dominated by warlords, who were more concerned with their own political powers and private armies than national interests. The Chinese Beiyang government was occupied with suppressing internal affairs, and did little to counter the influence exerted by imperialist foreign powers. The Beiyang government made various concessions to foreigners in order to gain monetary and military support against their rivals.

Defeats by foreign powers and the presence of spheres of influence inflamed a sense of nationalism among the emerging middle class and cultural leaders. Leaders of the New Culture Movement believed that traditional Chinese values were responsible for the political weakness of the nation. This created a rather peculiar situation, in which Chinese nationalists called for a rejection of traditional values and the selective adoption of Western ideals of science and democracy.

China had entered World War I on the side of the Allied Triple Entente in 1917 with the condition that all German spheres of influence, such as Shandong [Shantung], would be returned to China; although in that year, 140,000 Chinese labourers (as a part of the British army, the Chinese Labour Corps) were sent to France.[1] The Versailles Treaty of April 1919 awarded German rights in Shandong Province to Japan. The representatives of the Chinese government put forth the following requests:

The Western Allies dominated the meeting and paid little heed to the Chinese representatives' demands. Britain and France were primarily interested in punishing Germany. Although the United States promoted Woodrow Wilson's Fourteen Points and the ideals of self-determination at the conference, Wilson was unable to advance these ideals in the face of stubborn resistance by David Lloyd George, Georges Clemenceau and the U.S. Congress. American advocacy of self-determination at the League of Nations was attractive to Chinese intellectuals, but the failure of the United States to follow through was seen as a betrayal. Chinese diplomatic failure at the Paris Peace Conference became the incident that touched off the outbreak of the May Fourth Movement, and became known as the "Shandong Problem".

On the morning of May 4, 1919, student representatives from thirteen different local universities met in Beijing and drafted five resolutions:

Protestors dissatisfied with the Treaty of Versailles for China

On the afternoon of May 4 over 3,000 students of Peking University and other schools gathered together in front of Tiananmen and held a demonstration. The general opinion was that the Chinese government was "spineless".[1] They voiced their anger at the Allied betrayal of China and the government's inability to secure Chinese interests in the conference. A boycott of Japanese products during this period was advocated, which boosted the domestic Chinese industry slightly.[citation needed] Throughout the streets of China, students packed the streets to protest China's concession to Japanese demands. During these demonstrations, students also insisted on the resignation of three Chinese officials involved in these proceedings. After burning the residence of one of the three despised officials, student protesters were arrested and severely assaulted.[2]

They shouted out such slogans as "Struggle for the sovereignty externally, get rid of the national traitors at home", "Do away with the 'Twenty-One Demands'", and "Don't sign the Versailles Treaty".

The next day, students in Beijing as a whole went on strike, and students in other parts of the country responded one after another. From early June, in order to support the students' struggle, workers and businessmen in Shanghai also went on strike. The center of the movement moved from Beijing to Shanghai. In addition to students, a wide array of different groups also publicly displayed disagreement with the Chinese government. The lower class was also very angry at the current state of affairs, such as mistreatment of workers and perpetual poverty of small peasants. Chancellors from thirteen of China's tertiary institutions initiated the rescue of student prisoners. Congregations such as media outlets, citizen societies, and chambers of commerce offered their support for these students. Merchants further illustrated support for the students by resisting tax payments if China's government remained obstinate.[3] In Shanghai, these May Fourth events culminated into general strikes by merchants and workers that nearly devastated the entire Chinese economy.[2] Under intense public outcry, the Beiyang government had to release the arrested students and dismiss Cao Rulin, Zhang Zongxiang and Lu Zongyu from their posts. Also, the Chinese representatives in Paris refused to sign on the peace treaty: the May Fourth Movement won the initial victory. However, this move was more symbolic than anything else. Japan still retained control of the Shandong Peninsula and the islands in the Pacific it had obtained during World War I. Even though these protests and marches did not manage to achieve all their objectives, the partial success of the movement exhibited the ability of China's various social classes to successfully collaborate, an ideal that would be admired by both Nationalists and Communists.[2]

For many years, the orthodox view in the People's Republic of China was that after the demonstrations in 1919 and their suppression, the discussion became more and more political. People like Chen Duxiu and Li Dazhao shifted more to the Left and were among the leading founders of the 1921 Communist Party of China, whilst other intellectuals, such as the Anarchist writer and agitator, Ba Jin also took part in the movement. Originally voluntarist or nihilist figures like Li Shicen and Zhu Qianzhi made similar turns to the Left as the 1920s saw China become increasingly turbulent.

According to this view:

The May Fourth Movement was a thoroughly anti-imperialist and anti-feudal revolutionary movement. Young students acted as its pioneers. The Chinese working class went up on the political stage, and functioned as the main force in the later period of the movement. Li Dazhao, Chen Duxiu and other intellectuals directed and promoted the development of the movement, and played leading roles in it. On the local level, future Communist Party leader Mao Zedong rallied opposition against Hunan's warlord Chang Ching-yao.

The May Fourth Movement covered more than 20 provinces and over 100 cities of the country. It had a broader popular foundation than the Revolution of 1911. Its great contribution lay in arousing the people's consciousness and preparing for the unity of the revolutionary forces.

The May Fourth Movement served as an intellectual turning point in China; it was a seminal event that radicalized Chinese intellectual thought. Western-style liberal democracy had previously had a degree of traction amongst Chinese intellectuals, but after the Versailles Treaty (which was viewed as a betrayal of China's interests), lost much of its attractiveness. Woodrow Wilson's Fourteen Points, despite being rooted in moralism, were also seen as Western-centric and hypocritical.

Many in the Chinese intellectual community believed that the United States had done little to convince the imperialist powers (especially Britain, France, and Japan) to adhere to the Fourteen Points, and observed that the United States itself had declined to join the League of Nations; as a result they turned away from the Western liberal democratic model. Marxism began to take hold in Chinese intellectual thought, particularly among those already on the Left. It was during this time that communism was studied seriously by some Chinese intellectuals such as Chen Duxiu and Li Dazhao.

Some historians[who?] have speculated that Chinese history might have taken a different course at this time had the United States taken a stronger position on Woodrow Wilson's Fourteen Points and self-determination. The United States was not a major imperialist power and was in a relatively strong position to take an anti-imperialist stance; however, it did not do so. As a result, China turned its attention to utilizing other political tools that could potentially resolve many of the nation's issues. These tools subsumed the concepts of Marxism and Leninism.

Scholars rank the New Culture and May Fourth Movements as significant turning points, along with the abolition of the civil service system in 1905 and the overthrow of the monarchy in 1911. Participants at the time, such as Hu Shi, referred to this era as the Chinese Renaissance because there was an intense focus on science and experimentation.[4]

The challenge to traditional Chinese values, however, was also met with strong opposition, especially from the Kuomintang (nationalists). From their perspective, the movement destroyed the positive elements of Chinese tradition and placed a heavy emphasis on direct political actions and radical attitudes, characteristics of the emerging Chinese Communist Party. On the other hand, the Communist Party viewed the movement more favorably, although remaining suspicious of the early phase which emphasized the role of enlightened intellectuals, not revolution.[5] In its broader sense, the May Fourth Movement led to the establishment of radical intellectuals who went on to mobilize peasants and workers into the Communist party and gain the organizational strength that would solidify the success of the Communist Revolution.[3]

Chinese Muslims refused to follow the May Fourth Movement. Instead, they taught both modern, western education such as science, along with traditional Confucian literature and Classical Chinese languages with Islamic education and Arabic in their schools. They merely incorporated the new instead of destroying the old and replacing it.[6]

The Kuomintang party, under Chiang Kai-shek's rule, carried out the opposite agenda of the May Fourthers, he started the New Life Movement, against western values, instead promomoting Confucianism and making it more Chinese. The Kuomintang purged China's education system of western ideas, introducing Confucianism into the curriculum. Education came under the total control of state, which meant, in effect, the Kuomintang party, via the Ministry of Education. Military and political classes on the Kuomintang's Three principles of the people were added. Textbooks, exams, degrees and educational instructors were all controlled by the state, as were all universities.[8]

Although the May Fourth Movement did find partial success at removing Chinese traditional culture,[citation needed] there were still proponents who steadfastly argued that China's traditions and values should be the fundamental foundation of the nation. From these opponents of Western civilization derived three neotraditional schools of thought: national essence, national character, and modern relevance of Confucianism. Each school of thought denounced the western values of individualism, materialism and utilitarianism as adequate avenues for the development of China. Each school possessed specific objectives. The "national essence" school sought to discover aspects of traditional culture that could potentially serve the national development of China. Such traditional aspects consisted of various philosophical and religious practices that emerged parallel with Confucianism. Most particularly, China imported Buddhism, a religion from their neighboring country of India. Under the “national character” school, advocates promoted the traditional family system, the primary target of the May Fourth Movement. In this school, reformers viewed their Western counterparts as shells without morals. Finally, the modern relevance of Confucianism revolved around this notion that Confucian values were better than Western ones. Due to the fact that western culture primarily concentrated their efforts on rational analysis, China’s neotraditionalist disputed that the concept was misguided especially in the realistic, altering milieu of the world. Most importantly, these three neo-traditionalist thoughts gave no consideration to the individual, which was the main theme of the May Fourth Movement.[9]