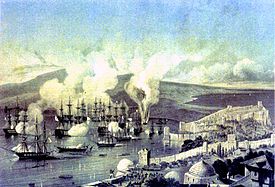 The Battle of Sinop was the last major naval battle involving sailing warships.