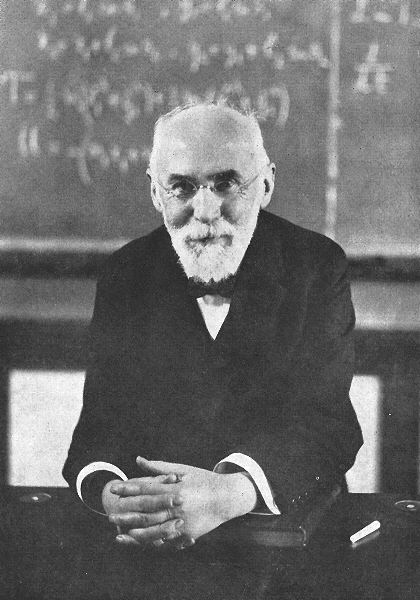 Hendrik Antoon Lorentz (, &ndash; , ) was a Dutch who shared the 1902 with for the discovery and theoretical explanation of the . He also derived the transformation equations subsequently used by to describe space and time.

Hendrik Lorentz was born in , , the son of Gerrit Frederik Lorentz (1822 &ndash; 1893), a well-off nurseryman, and Geertruida van Ginkel (1826 &ndash; 1861). In 1862, after his mother's death, his father married Luberta Hupkes. From 1866-1869 he attended the newly established high school in Arnhem, and in 1870 he passed the exams in which were then required for admission to University.
Lorentz studied and at the , where he was strongly influenced by the teaching of astronomy professor ; it was his influence that led him to become a physicist. After earning a , he returned to Arnhem in 1872 to teach high school classes in mathematics, but he continued his studies in next to his teaching position. In 1875 Lorentz earned a under on a thesis entitled " _nl. Over de theorie der terugkaatsing en breking van het licht" (On the theory of reflection and refraction of light), in which he refined the electromagnetic theory of .
In 1881 Hendrik married , niece of Frederik Kaiser. She was the daughter of , director of the 's Engraving School and professor of , and designer of the first Dutch s (1852). Later Kaiser was the Director of the National Gallery of Amsterdam. Hendrik and Aletta's eldest daughter Geertruida Luberta Lorentz was to become a physicist as well.

In 1878, only 24 years of age, Lorentz was appointed to the newly established chair in theoretical physics at the . On January 25 1878, he delivered his inaugural lecture on " _nl. De moleculaire theoriën in de natuurkunde" (The molecular theories in physics).

During the first twenty years in Leiden, Lorentz was primarily interested in the theory of electromagnetism to explain the relationship of electricity, magnetism, and light. After that, he extended his research to a much wider area while still focusing on theoretical physics. From his publications, it appears that Lorentz made contributions to mechanics, thermodynamics, hydrodynamics, kinetic theories, solid state theory, light, and propagation. His most important contributions were in the area of electromagnetism, the electron theory, and relativity.

Lorentz theorized that the s might consist of charged particles and suggested that the oscillations of these charged particles were the source of light. When colleague and former student of Lorentz discovered the in 1896, Lorentz supplied its theoretical interpretation. The experimental and theoretical work was honored with the Nobel prize in physics in 1902. Lorentz' name is now associated with the formula, the , the distribution, and the .

In 1892, with the attempt to explain the , Lorentz proposed that moving bodies contract in the direction of motion (see ; had already arrived at this conclusion, see ). Lorentz worked on describing electromagnetic phenomena (the propagation of light) in reference frames that moved relative to each other. He discovered that the transition from one to another reference frame could be simplified by using a new time variable which he called "local time". The local time depended on the universal time and the location under consideration. Lorentz's publications (of 1895 [Lorentz 1895] and 1899) [Lorentz (1899)] made use of the term local time without giving a detailed interpretation of its physical relevance. In 1900, called Lorentz's local time a "wonderful invention" and illustrated it by showing that clocks in moving frames are synchronized by exchanging light signals that are assumed to travel at the same speed against and with the motion of the frame. [Poincaré 1900] In 1899, and again in 1904, [Lorentz 1904] Lorentz added to his transformations and published what Poincaré in 1905 named . It was apparently unknown to Lorentz that had used identical transformations to describe orbiting electrons in 1897. Larmor's and Lorentz's equations look somewhat unfamiliar, but they are algebraically equivalent to those presented by Poincaré and Einstein in 1905. [Macrossan 1986] Lorentz's 1904 paper includes the covariant formulation of electrodynamics, in which electrodynamic phenomena in different reference frames are described by identical equations with well defined transformation properties. The paper clearly recognizes the significance of this formulation, namely that the outcomes of electrodynamic experiments do not depend on the relative motion of the reference frame. The 1904 paper includes a detailed discussion of the increase of the inertial mass of rapidly moving objects. In 1905, Einstein would use many of the concepts, mathematical tools and results discussed to write his paper entitled " _de. Elektrodynamik" (Electrodynamics) known today as the theory of special relativity. Because Lorentz laid the fundamentals for the work by Einstein, this theory was called the "Lorentz-Einstein theory" originally.

The increase of mass was the first prediction of special relativity to be tested, but from early experiments by Kaufmann it appeared that his prediction was wrong; this led Lorentz to the famous remark that he was "at the end of his Latin." [ [http://web.archive.org/web/20050221211608/www.univ-nancy2.fr/poincare/chp/text/lorentz1.html Lorentz à Poincaré ] at web.archive.org] The confirmation of his prediction had to wait until 1908. In 1909, Lorentz published "Theory of Electrons" based on a series of lectures in Mathematical Physics he gave at . [Lorentz 1909]

:"The most satisfactory theory is that of Lorentz; it is unquestionably the theory that best explains the known facts, the one that throws into relief the greatest number of known relations ... it is due to Lorentz that the results of on the optics of moving bodies, the laws of normal and abnormal dispersion and of absorption are connected with each other ... Look at the ease with which the new Zeeman phenomenon found its place, and even aided the classification of Faraday's magnetic rotation, which had defied all Maxwell's efforts." [Poincaré 1902]

:"It is the great merit of H. A. Lorentz to have seen that the fundamental equations of electromagnetism admit a group of transformations which enables them to have the same form when one passes from one frame of reference to another; this new transformation has the most profound implications for the transformations of space and time" [Langevin 1911] Lorentz and Emil Wiechert (Göttingen) had an interesting correspondence on the topics of electromagnetism and the theory of relativity, and Lorentz explained his ideas in letters to Wiechert. The correspondence between Lorentz and Wiechert has been published by Wilfried Schröder (Arch. ex. hist. Sci, 1984).

Lorentz was chairman of the first held in Brussels in the autumn of 1911. Shortly after the conference, Poincaré wrote an essay on quantum physics which gives an indication of Lorentz's status at the time:

:" ... at every moment [the twenty physicists from different countries] could be heard talking of the [quantum mechanics] which they contrasted with the old mechanics. Now what was the old mechanics? Was it that of Newton, the one which still reigned uncontested at the close of the nineteenth century? No, it was the mechanics of Lorentz, the one dealing with the principle of relativity; the one which, hardly five years ago, seemed to be the height of boldness." [Poincaré 1913]

:"For me personally he meant more than all the others I have met on my life's journey." [ [http://books.google.nl/books?id=EF2fKDpp8S8C&pg=PA375&lpg=PA375&dq=%22For+me+personally+he+meant+more+than+all+the+others+I+have+met+on+my+life%27s+journey%22&source=web&ots=XPV0HbS5AT&sig=nV8cYUvnu8Wq0_u45wEnYuh6J0s&hl=nl&sa=X&oi=book_result&resnum=2&ct=result Link] ]

In 1912 Lorentz retired early to become director of research at in , although he remained external professor at Leiden and gave weekly lectures there. succeeded him in his chair at the University of Leiden, founding the Institute for Theoretical Physics which would become known as the . In addition to the , Lorentz received a great many honours for his outstanding work. He was elected a Fellow of the in 1905. The Society awarded him their in 1908 and their in 1918.

While Lorentz is mostly known for fundamental theoretical work, he also had an interest in practical applications. In the years 1918-1926, at the request of the Dutch government, Lorentz headed a committee to calculate some of the effects of the proposed (Closure Dike) flood control dam on other seaworks in the Netherlands. was mainly an empirical science at that time, but the disturbance of the tidal flow caused by the Afsluitdijk was so unprecedented that the empirical rules could not be trusted. Lorentz proposed to start from the basic equations of motion and solve the problem numerically. This was feasible for a "", because of the quasi-one-dimensional nature of the water flow in the . The Afsluitdijk was completed in 1933 and the predictions of Lorentz and his committee turned out to be remarkably accurate. [Beenackers]

Lorentz died in , Netherlands. The respect in which he was held in the Netherlands is apparent from O. W. Richardson's description of his funeral:

:"The funeral took place at Haarlem at noon on Friday, February 10. At the stroke of twelve the State telegraph and telephone services of Holland were suspended for three minutes as a revered tribute to the greatest man Holland has produced in our time. It was attended by many colleagues and distinguished physicists from foreign countries. The President, Sir Ernest Rutherford, represented the Royal Society and made an appreciative oration by the graveside."

:" [A] man of remarkable intellectual powers ... . Although steeped in his own investigation of the moment, he always seemed to have in his immediate grasp its ramifications into every corner of the universe. ... The singular clearness of his writings provides a striking reflection of his wonderful powers in this respect. .... He possessed and successfully employed the mental vivacity which is necessary to follow the interplay of discussion, the insight which is required to extract those statements which illuminate the real difficulties, and the wisdom to lead the discussion among fruitful channels, and he did this so skillfully that the process was hardly perceptible."

:"For many years physicists had always been eager "to hear what Lorentz will say about it" when a new theory was advanced, and, even at seventy-two, he did not disappoint them." [Przibram 1967]

;Papers of LorentzThere are thirty-six complete papers by Lorentz (mostly in English) that are available for online viewing [http://www.historyofscience.nl/works_detail.cfm?RecordId=5 in the Proceedings of the Royal Netherlands Academy of Arts and Science, Amsterdam] .