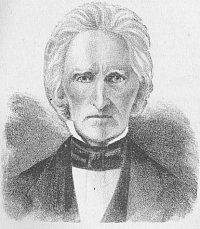 Lucas was born in 1781 in Shepherdstown, a small community along the Potomac River in Virginia (now located in far eastern West Virginia), son of William Lucas and Susannah Barnes. Lucas came from a Quaker family whose roots stretched back to 1679 in Pennsylvania, and had recently moved to Virginia. His father, a veteran, owned slaves and large amounts of land. According to family legend, Robert's uncle, Joseph Barnes, built a steam-powered boat long before Fulton's invention. Robert received some early schooling in mathematics and surveying, skills which would prove invaluable to his future work [Parish 1907] . At about the age of 19 he moved to the Scioto Valley of the Northwest Territory, later Ohio [Petersen 1952a:314-315] . He was preceded by other family members, including two older brothers and a cousin. One brother would later become a general, while his other brother and his cousin would become Ohio legislators. The family bought large parcels of land; eventually the nearby town of Lucas was named for them. For his skill in recruiting troops for the Army during the increasing hostilities between England, France, and the U.S., Robert Lucas was made Captain in 1807. He was elected to the Ohio legislature for the first time in 1808. He became married to Elizabeth Brown, his landlord's daughter, in 1810, and they had a daughter, Minerva, in 1811. Through complex political maneuvering, Lucas was made a Brigadier General in 1810 or 1811 [Parish 1907] .

Lucas served in the and was famous for his resourcefulness and calm in an increasingly chaotic campaign. As one of his contemporaries stated, "As a spy he was productive and brave—as a soldier he had no superior" [Verchères de Boucherville 1940:314] . Lucas rose to national prominence during the court-martial trial of General . Hull was accused of incompetence in the loss of Detroit and the Michigan Territory to the British in June 1812, and the journals Lucas kept during the campaign were used as evidence to convict Hull [Gilpin 1958; Parish 1907; Petersen 1952:241; Verchères de Boucherville 1940] .Lucas' political career blossomed. In 1818 he was named Speaker of the Ohio Senate. In 1822, he lost the State Senate election to his former brother-in-law and political rival, William Kendall. Shortly after, around 1824, Lucas built a large brick house two miles east of , named Friendly Grove, which became an epicenter of local political activity, and still stands today [Parish 1907] .Lucas regained his State Senate seat in 1824, and actively campaigned for Andrew Jackson. Lucas again lost his senate seat in 1828 to Kendall, but Lucas had the pleasure of being part of the electoral congress that elected Jackson President that year. Lucas won his senate seat back in 1829, in a special election after Kendall resigned; again, he was elected Senate speaker. In 1831, Lucas ran for the state assembly and lost, but he quickly rebounded [Lucas' political rise is documented in a numer of sources, including Peterson, Parish and Ryan] .

As an ardent Democrat, perhaps the highlight of his career was to serve as the chairman and president of the , the Democratic Party's first national convention. Lucas was also nominated the Democratic candidate for governor in 1832, and won after a vitriolic campaign. , was established and named for the governor during his second term, in defiance of the , which also claimed the land around the mouth of the ndash thus provoking the almost-bloodless [Ryan 1912:440-447] .

During his tenure running Iowa, he again showed his tendency towards conflict with other states, starting the with Missouri. Technically, Lucas was not the first acting governor of the Iowa territory. William B. Conway, appointed territorial secretary by , arrived in Iowa six weeks before Lucas and thus assumed the duties of acting governor. Friction developed between Lucas and Conway over some of the decisions Conway made in Lucas' absence, and led to an acerbic relationship. Lucas was often at odds with the territorial legislature, his liberal use of absolute veto power and his condescending rebukes of legislators often made him the target of acrimonious exchanges. Conway complained to Van Buren that Lucas committed "vexatious, ungraceful, petulant, ill-natured and dogmatic interferences" with the legislature [Petersen 1952a:317-318] . Van Buren and the U. S. Congress responded by limiting the territorial governor’s veto power and his ability to make appointments.Lucas served for only a few years as territorial governor, from 1838-1841, and spent those years mostly in and (then called Bloomington), as there were only provisional accommodations in Iowa City for the territorial legislature. His retirement house in Iowa City, Plum Grove, is maintained by the state as a monument to Lucas.