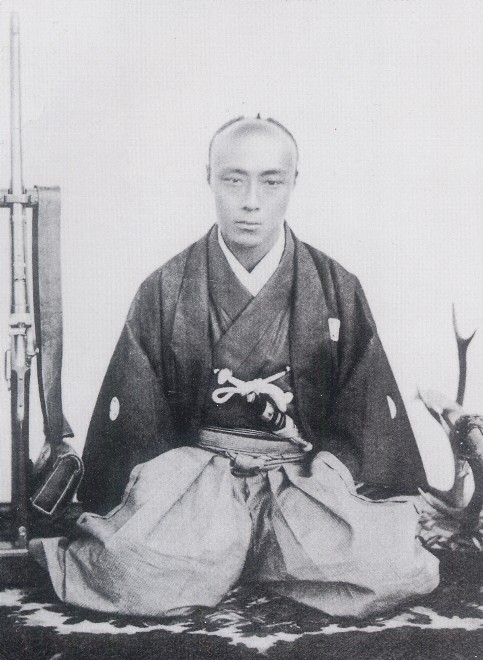 Tokugawa Yoshinobu, 1st Prince of the Yoshinobu-ke (徳川 慶喜 "Tokugawa Yoshinobu" (also known as "Keiki"), , &ndash;, ) was the 15th and last of the of . He was part of a movement which aimed to reform the aging shogunate, but was ultimately unsuccessful. After resigning in late 1867, he went into retirement, and largely avoided the public eye for the rest of his life.

Tokugawa Yoshinobu was born in Mito, , the seventh son of , of Mito. Mito was one of the "", the three branch families of the Tokugawa clan which were eligible to be chosen as shogun.

Born with the name Matsudaira Shichirōma [Takano, "Tokugawa Yoshinobu", p. 26. Sons of the lord of Mito did not bear the name Tokugawa unless they themselves became the next lord.] , he was brought up under strict, spartan supervision and tutelage [Tokugawa, "Tokugawa yonbyakunen no naishobanashi," pp. 138-140.] . He was taught in the literary and , as well as receiving a solid education in the principles of politics and government. [Takano, p. 28.]

At the instigation of his father, Shichirōma was adopted by the Hitotsubashi-Tokugawa family in order to have a better chance of succeeding to the shogunate. [Takano, p. 38.] He became family head in 1847, coming of age that year, receiving court rank and title, and taking the name Yoshinobu. [Takano, p. 48.] Upon the death of the 13th shogun, Shogun Iesada, in 1858, Yoshinobu was nominated as a potential successor. [Borton, "Japan's Modern Century", p. 40.] His supporters touted his skill and efficiency in managing family affairs. However, the opposing faction, led by , won out. Their candidate, the young , was chosen, and became the 14th shogun Iemochi. [Borton, pp. 39-40.] Soon after, during the , Yoshinobu and others who supported him were placed under . [Takano, pp. 12-13.] Yoshinobu himself was made to retire from Hitotsubashi headship.

The period of Ii's domination of the Tokugawa government was marked by mismanagement and political infighting. Upon Ii's in 1860, Yoshinobu was reinstated as Hitotsubashi family head, and was nominated in 1862 to be the nihongo|shogun's guardian|将軍後見職|shōgun atomi-shoku, receiving the position soon afterwards. [Murray, "Japan", p. 362; Kobiyama, "Matsudaira Katamori no shōgai", p. 75; Bolitho, "Collapse of the Tokugawa Bakufu", p. 9.] At the same time, his two closest allies, and , were appointed to other high positions: Yoshinaga as nihongo|chief of political affairs|政治総裁職|seiji sōsai shoku [Kobiyama, p. 75.] , Katamori as nihongo|Guardian of Kyoto|京都守護職|Kyoto Shugoshoku [Takano, pp. 132-133.] . The three men then took numerous steps to quell political unrest in the Kyoto area, and gathered allies to counter the activities of the rebellious . They were instrumental figures in the "" political party, which sought a reconciliation between the shogunate and the imperial court. [Kobiyama, pp. 84-87; Totman, p. 45; Takano, p. 20.]

In 1864, Yoshinobu, as commander of the imperial palace's defense, successfully defeated the Chōshū forces in their attempt to capture the imperial palace's Gate. This was achieved by use of the forces of the -Satsuma coalition. [See "Japan 1853-1864, Or, Genji Yume Monogatari", trans. by Ernest Mason Satow. (Tokyo: Naigai Shuppan Kyokai), for more.]

The national army and navy, which had already been formed under Tokugawa command, were strengthened by the assistance of the French, and military equipment was also purchased from the . [Treat, "Japan and the United States: 1853-1921", p. 89] The outlook among many was that the Tokugawa shogunate was gaining ground towards renewed strength and power; however, it in fact would fall in less than a year.

Fearing the renewed strengthening of the Tokugawa shogunate under a strong and wise ruler, samurai from Satsuma, Chōshū and Tosa formed an alliance to counter it. Under the banner of "" ("revere the Emperor, expel the barbarians!") coupled with a fear of the new Shogun as the "Rebirth of Ieyasu" who would continue to usurp the power of the Emperor, they worked to bring about an end to the shogunate, though they varied in their approaches. In particular, Tosa was more moderate; it proposed a compromise whereby Yoshinobu would resign as shogun, but preside over a new national governing council composed of various . To this end, , the lord of Tosa, together with his advisor, Gotō Shōjirō, petitioned Yoshinobu to resign

Yoshinobu stepped down as shogun in late 1867, formally returning governing power to the Emperor. [Takano, p. 256.] He then withdrew from Kyoto to . However, Satsuma and Chōshū, while supportive of a governing council of daimyo, were opposed to Yoshinobu leading it.

When the Tokugawa forces arrived outside Kyoto, they were refused entry, and were attacked by Satsuma and Choshu troops, starting the , the first clash of the . [Sasaki, pp. 23-24; Bolitho, pp. 420-422.] Though the Tokugawa forces had a distinct advantage in numbers, Yoshinobu abandoned his army in the midst of the fight, and escaped to [Kobiyama, p. 124.] . He placed himself under voluntary confinement, and indicated his submission to the imperial court. However, a peace agreement was reached wherein , the young head of a branch of the Tokugawa family, was adopted and made Tokugawa family head [Griffis, "The Mikado: Institution and Person", p. 141.] ; Edo Castle was handed over to the imperial army [Takano, p. 267.] , and the city spared from all-out war.

Together with Kamenosuke (who took the name Tokugawa Iesato), Yoshinobu moved to Shizuoka, the place to which , founder of Tokugawa shogunate, had also retired, centuries earlier. Iesato was made the "" of the new , but lost this title a few years later, when the domains were abolished.

Many of the "" also relocated to Shizuoka; a large proportion of them did not find adequate means to support themselves. As a result, many of them resented Yoshinobu, some of them to the point of wanting him dead. [Tokugawa Munefusa, "Tokugawa yonbyakunen no naisho banashi", vol. 1, p. 131] Yoshinobu was aware of this, and was so afraid of assassination that he redesigned his sleeping arrangement to confuse a potential assassin. [Tokugawa, pp. 131-133]