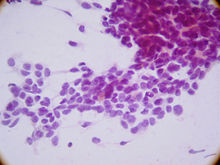 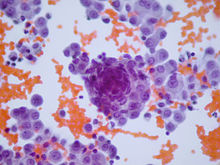 Desmoplastic small-round-cell tumor is classified as a soft tissue sarcoma. It is an aggressive and rare tumor that primarily occurs as masses in the abdomen.[1] Other areas affected may include the lymph nodes, the lining of the abdomen, diaphragm, spleen, liver, chest wall, skull, spinal cord, large intestine, small intestine, bladder, brain, lungs, testicles, ovaries, and the pelvis. Reported sites of metatastic spread include the liver, lungs, lymph nodes, brain, skull, and bones.

The tumor is considered a childhood cancer that predominantly strikes boys and young adults.

The disease rarely occurs in females, but when it does the tumors can be mistaken for ovarian cancer.[2]

There are no known risk factors that have been identified specific to the disease. The tumor appears to arise from the primitive cells of childhood, and is considered a childhood cancer.

Research has indicated that there is a chimeric relationship between desmoplastic small-round-cell tumor (DSRCT) and Wilms' tumor and Ewing's sarcoma. Together with neuroblastoma and non-Hodgkin's lymphoma, they form the small or B cell tumors.

DSRCT is associated with a unique chromosomal translocation (t11;22)(p13:q12)[3] resulting in a EWS/WT1 transcript[4] that is diagnostic of this tumor.[1] This transcript codes for a protein that acts as a transcriptional activator that fails to suppress tumor growth.

There are few early warning signs that a patient has a DSRCT. Patients are often young and healthy as the tumors grow and spread uninhibited within the abdominal cavity. These are rare tumors and symptoms are often misdiagnosed by family physicians. The abdominal masses can grow to enormous size before being noticed by the patient. The tumors can be felt as hard, round masses by palpating the abdomen.

Because this is a rare tumor, not many family physicians or oncologists are familiar with this disease. DSRCT in young patients can be mistaken for other abdominal tumors including rhabdomyosarcoma, neuroblastoma, and mesenteric carcinoid. In older patients DSRCT can resemble lymphoma, peritoneal mesothelioma, and peritoneal carcinomatosis. In males DSRCT may be mistaken for germ cell or testicular cancer while in females DSRCT can be mistaken for Ovarian cancer. DSRCT shares characteristics with other small-round blue cell cancers including Ewing's sarcoma, acute leukemia, small cell mesothelioma, neuroblastoma, primitive neuroectodermal tumor, rhabdomyosarcoma, and Wilms' tumor.

On immunohistochemistry, these cells have trilinear coexpression including the epithelial marker cytokeratin, the mesenchymal markers desmin and vimentin, and the neuronal marker neuron-specific enolase. Thus, although initially thought to be of mesothelial origin due to sites of presentation, it is now hypothesized to arise from a progenitor cell with multiphenotypic differentiation.

The prognosis for DSRCT remains poor.[8] The 5-year survival rate of DRSCT is only approximately 15%.[9] Prognosis depends upon the stage of the cancer. Because the disease can be misdiagnosed or remain undetected, tumors frequently grow large within the abdomen and metastasized or seed to other parts of the body.

There is no known organ or area of origin. DSRCT can metastasize through lymph nodes or the blood stream. Sites of metastatis include the spleen, diaphragm, liver, large and small intestine, lungs, central nervous system, bones, uterus, bladder, genitals, abdominal cavity, and the brain.

A multi-modality approach of high dose chemotherapy, aggressive surgical resection,[7] radiation, and stem cell rescue improves survival for some patients. Reports have indicated that patients will initially respond to first line chemotherapy and treatment but that relapse is common.

Some patients in remission or with inoperable tumor seem to benefit from long term low dose chemotherapy, turning DSRCT into a chronic disease.

The Stehlin Foundation[10] currently offers DSRCT patients the opportunity to send samples of their tumors free of charge for testing. Research scientists are growing the samples on nude mice and testing various chemical agents to find which are most effective against the individual's tumor.

Patients with advanced DSRCT may qualify to participate in clinical trials that are researching new drugs to treat the disease.

There is no connection to peritoneal mesothelioma which is another disease sometimes described as desmoplastic.