Lymphoma
This article is about lymphoma in humans. For the disease in dogs, cats, and ferrets, see lymphoma in animals.

Lymphoma is a cancer in the lymphatic cells of the immune system. Typically, lymphomas present as a solid tumor of lymphoid cells. Treatment might involve chemotherapy and in some cases radiotherapy and/or bone marrow transplantation, and can be curable depending on the histology, type, and stage of the disease.[1] These malignant cells often originate in lymph nodes, presenting as an enlargement of the node (a tumor). It can also affect other organs in which case it is referred to as extranodal lymphoma. Extranodal sites include the skin, brain, bowels and bone. Lymphomas are closely related to lymphoid leukemias, which also originate in lymphocytes but typically involve only circulating blood and the bone marrow (where blood cells are generated in a process termed haematopoesis) and do not usually form static tumors.[1] There are many types of lymphomas, and in turn, lymphomas are a part of the broad group of diseases called hematological neoplasms.

Thomas Hodgkin published the first description of lymphoma in 1832, specifically of the form named after him, Hodgkin's lymphoma.[2] Since then, many other forms of lymphoma have been described, grouped under several proposed classifications. The 1982 Working formulation classification became very popular. It introduced the category non-Hodgkin lymphoma (NHL), divided into 16 different diseases. However, because these different lymphomas have little in common with each other, the NHL label is of limited usefulness for doctors or patients and is slowly being abandoned. The latest classification by the WHO (2008) lists 70 different forms of lymphoma divided in four broad groups.[3]

A number of various classification systems exist for lymphoma. As an alternative to the American Lukes-Butler classification, in the early 1970s, Karl Lennert of Kiel, Germany, proposed a new system of classifying lymphomas based on cellular morphology and their relationship to cells of the normal peripheral lymphoid system.[5]

Some forms of lymphoma are categorized as indolent (e.g. small lymphocytic lymphoma), compatible with a long life even without treatment, whereas other forms are aggressive (e.g. Burkitt's lymphoma), causing rapid deterioration and death. However, most of the aggressive lymphomas respond well to treatment and are curable. The prognosis therefore depends on the correct diagnosis and classification of the disease, which is established after examination of a biopsy by a pathologist (usually a hematopathologist).[6]

The 1996 Working Formulation is a classification of non-Hodgkin lymphoma. It excluded the Hodgkin lymphomas and divided the remaining lymphomas into four grades (Low, Intermediate, High, and Miscellaneous) related to prognosis, with some further subdivisions based on the size and shape of affected cells. This purely histological classification included no information about cell surface markers, or genetics, and it made no distinction between T-cell lymphomas or B-cell lymphomas.See here

It was widely accepted at the time of its publication but is now obsolete.[7] It was superseded by subsequent classifications (see below) but it is still used by cancer agencies for compilation of lymphoma statistics and historical rare comparisons.

In the mid 1990s,the Revised European-American Lymphoma (REAL) Classification attempted to apply immunophenotypic and genetic features in identifying distinct clinicopathologic entities among all the lymphomas except Hodgkin's lymphoma.[8] REAL has been superseded by the WHO classification. REAL & WHO •B-cell neoplasms –precursor –mature •T-cell neoplasms –precursor –mature •Hodgkin lymphomaNon-HodgkinLymphomas

The WHO Classification, published in 2001 and updated in 2008,[4] is the latest classification of lymphoma and is based upon the foundations laid within the "Revised European-American Lymphoma classification" (REAL). This system attempts to group lymphomas by cell type (i.e. the normal cell type that most resembles the tumor) and defining phenotypic, molecular or cytogenetic characteristics. There are three large groups: the B cell, T cell, and natural killer cell tumors. Other less common groups, are also recognized. Hodgkin's lymphoma, although considered separately within the World Health Organization (and preceding) classifications, is now recognized as being a tumor of, albeit markedly abnormal, lymphocytes of mature B cell lineage. 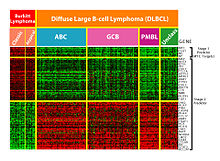 These depend on the specific form of lymphoma.[11] For some forms of lymphoma, watchful waiting is often the initial course of action.[12] If a low-grade lymphoma is becoming symptomatic, radiotherapy or chemotherapy are the treatments of choice; although they do not cure the lymphoma, they can alleviate the symptoms, particularly painful lymphadenopathy. Patients with these types of lymphoma can live near-normal lifespans, but the disease is incurable. Treatment of some other, more aggressive, forms of lymphoma can result in a cure in the majority of cases, but the prognosis for patients with a poor response to therapy is worse.[13] Treatment for these types of lymphoma typically consists of aggressive chemotherapy, including the CHOP or RCHOP regimen. Hodgkin lymphoma typically is treated with radiotherapy alone, as long as it is localized.[14] Advanced Hodgkin disease requires systemic chemotherapy, sometimes combined with radiotherapy.[15] See the articles on the corresponding form of lymphoma for further information.

Lymphoma is the most common form of hematological malignancy, or "blood cancer", in the developed world.

Taken together, lymphomas represent 5.3% of all cancers (excluding simple basal cell and squamous cell skin cancers) in the United States and 55.6% of all blood cancers.[17]

Because the whole system is part of the body's immune system, patients with a weakened immune system such as from HIV infection or from certain drugs or medication also have a higher incidence of lymphoma.

Following is a comparison of the most common types of lymphoma: