Ascites (/əˈsaɪtiːz/ ə-sy-teez, from Greek askites, "baglike")[1] is a gastroenterological term for an accumulation of fluid in the peritoneal cavity. The medical condition is also known as peritoneal cavity fluid, peritoneal fluid excess, hydroperitoneum or more archaically as abdominal dropsy. Although most commonly due to cirrhosis and severe liver disease, its presence can portend other significant medical problems. Diagnosis of the cause is usually with blood tests, an ultrasound scan of the abdomen, and direct removal of the fluid by needle or paracentesis (which may also be therapeutic). Treatment may be with medication (diuretics), paracentesis, or other treatments directed at the cause. 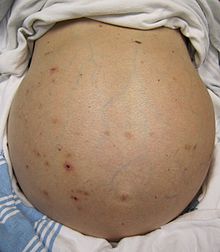 A severe case of ascites due to cirrhosis

Mild ascites is hard to notice, but severe ascites leads to abdominal distension. Patients with ascites generally will complain of progressive abdominal heaviness and pressure as well as shortness of breath due to mechanical impingement on the diaphragm.

Ascites is detected on physical examination of the abdomen by visible bulging of the flanks in the reclining patient ("flank bulging"), "shifting dullness" (difference in percussion note in the flanks that shifts when the patient is turned on the side) or in massive ascites with a "fluid thrill" or "fluid wave" (tapping or pushing on one side will generate a wave-like effect through the fluid that can be felt in the opposite side of the abdomen).

Other signs of ascites may be present due to its underlying etiology. For instance, in portal hypertension (perhaps due to cirrhosis or fibrosis of the liver) patients may also complain of leg swelling, bruising, gynecomastia, hematemesis, or mental changes due to encephalopathy. Those with ascites due to cancer (peritoneal carcinomatosis) may complain of chronic fatigue or weight loss. Those with ascites due to heart failure may also complain of shortness of breath as well as wheezing and exercise intolerance. 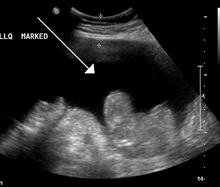 Ascites in a person with abdominal cancer as seen on ultrasound

Routine complete blood count (CBC), basic metabolic profile, liver enzymes, and coagulation should be performed. Most experts recommend a diagnostic paracentesis be performed if the ascites is new or if the patient with ascites is being admitted to the hospital. The fluid is then reviewed for its gross appearance, protein level, albumin, and cell counts (red and white). Additional tests will be performed if indicated such as Gram stain and cytopathology.[3]

Ultrasound investigation is often performed prior to attempts to remove fluid from the abdomen. This may reveal the size and shape of the abdominal organs, and Doppler studies may show the direction of flow in the portal vein, as well as detecting Budd-Chiari syndrome and portal vein thrombosis. Additionally, the sonographer can make an estimation of the amount of ascitic fluid, and difficult-to-drain ascites may be drained under ultrasound guidance. Abdominal CT scan is a more accurate alternate to reveal abdominal organ structure and morphology.

Causes of low SAAG ("exudate") are:

Ascitic fluid can accumulate as a transudate or an exudate. Amounts of up to 25 liters are possible.

Roughly, transudates are a result of increased pressure in the portal vein (>8 mmHg, usually around 20 mmHg[6]), e.g. due to cirrhosis, while exudates are actively secreted fluid due to inflammation or malignancy. As a result, exudates are high in protein, high in lactate dehydrogenase, have a low pH (<7.30), a low glucose level, and more white blood cells. Transudates have low protein (<30g/L), low LDH, high pH, normal glucose, and fewer than 1 white cell per 1000 mm³. Clinically, the most useful measure is the difference between ascitic and serum albumin concentrations. A difference of less than 1 g/dl (10 g/L) implies an exudate.[3]

Portal hypertension plays an important role in the production of ascites by raising capillary hydrostatic pressure within the splanchnic bed.

Regardless of the cause, sequestration of fluid within the abdomen leads to additional fluid retention by the kidneys due to stimulatory effect on blood pressure hormones, notably aldosterone. The sympathetic nervous system is also activated, and renin production is increased due to decreased perfusion of the kidney. Extreme disruption of the renal blood flow can lead to hepatorenal syndrome. Other complications of ascites include spontaneous bacterial peritonitis (SBP), due to decreased antibacterial factors in the ascitic fluid such as complement.

Ascites is generally treated while an underlying etiology is sought, in order to prevent complications, relieve symptoms, and prevent further progression. In patients with mild ascites, therapy is usually as an outpatient. The goal is weight loss of no more than 1.0 kg/day for patients with both ascites and peripheral edema and no more than 0.5 kg/day for patients with ascites alone.[7] In those with severe ascites causing a tense abdomen, hospitalization is generally necessary for paracentesis.[8][9]

Treatments in high SAAG ("transudate") are:

Since salt restriction is the basic concept in treatment, and aldosterone is one of the hormones that acts to increase salt retention, a medication that counteracts aldosterone should be sought. Spironolactone (or other distal-tubule diuretics such as triamterene or amiloride) is the drug of choice since they block the aldosterone receptor in the collecting tubule. This choice has been confirmed in a randomized controlled trial.[11] Diuretics for ascites should be dosed once per day.[12] Generally, the starting dose is oral spironolactone 100 mg/day (max 400 mg/day). 40% of patients will respond to spironolactone.[10] For nonresponders, a loop diuretic may also be added and generally, furosemide is added at a dose of 40 mg/day (max 160 mg/day), or alternatively (bumetanide or torasemide). The ratio of 100:40 reduces risks of potassium imbalance.[12] Serum potassium level and renal function should be monitored closely while on these medications.[13]

Monitoring diuresis: Diuresis can be monitored by weighing the patient daily. The goal is weight loss of no more than 1.0 kg/day for patients with both ascites and peripheral edema and no more than 0.5 kg/day for patients with ascites alone.[7] If daily weights cannot be obtained, diuretics can also be guided by the urinary sodium concentration. Dosage is increased until a negative sodium balance occurs.[12] A random urine sodium-to-potassium ratio of > 1 is 90% sensitivity in predicting negative balance (> 78-mmol/day sodium excretion).[14]

Diuretic resistance: Diuretic resistance can be predicted by giving 80 mg intravenous furosemide after 3 days without diuretics and on an 80 mEq sodium/day diet. The urinary sodium excretion over 8 hours < 50 mEq/8 hours predicts resistance.[15]

If a patient exhibits a resistance to or poor response to diuretic therapy, ultrafiltration [disambiguation needed

] or aquapheresis may be needed to achieve adequate control of fluid retention and congestion. The use of such mechanical methods of fluid removal can produce meaningful clinical benefits in patients with diuretic resistance and may restore responsiveness to conventional doses of diuretics.[16][17]

Water restriction is needed if hyponatremia < 130 mmol per liter develops.[13]

In those with severe (tense) ascites, therapeutic paracentesis may be needed in addition to medical treatments listed above.[8][9] As this may deplete serum albumin levels in the blood, albumin is generally administered intravenously in proportion to the amount of ascites removed.

Ascites that is refractory to medical therapy is considered an indication for liver transplantation. In the United States, the MELD score (online calculator)[18] is used to prioritize patients for transplantation.

In a minority of patients with advanced cirrhosis that have recurrent ascites, shunts may be used. Typical shunts used are portacaval shunt, peritoneovenous shunt, and the transjugular intrahepatic portosystemic shunt (TIPS). However, none of these shunts has been shown to extend life expectancy, and are considered to be bridges to liver transplantation. A meta-analysis of randomized controlled trials by the international Cochrane Collaboration concluded that "TIPS was more effective at removing ascites as compared with paracentesis...however, TIPS patients develop hepatic encephalopathy significantly more often"[19]

Exudative ascites generally does not respond to manipulation of the salt balance or diuretic therapy. Repeated paracentesis and treatment of the underlying cause is the mainstay of treatment.

Complications involve portal vein thrombosis and splenic vein thrombosis: clotting of blood affects the hepatic portal vein or varices associated with splenic vein. This can lead to portal hypertension and reduction in blood flow. When a liver cirrhosis patient is suffering from thrombosis, it is not possible to perform a liver transplant, unless the thrombosis is very minor. In case of minor thrombosis, there are some chances of survival using cadaveric liver transplant.

It has been suggested that ascites was seen as a punishment especially for oath-breakers among the Proto-Indo-Europeans.[20] This proposal builds on the Hittite military oath as well as various Vedic hymns (RV 7.89, AVS 4.16.7). A similar curse dates to the Kassite dynasty (12th century BC), threatening oath-breakers: "May Marduk, king of heaven and earth, fill his body with dropsy, which has a grip that can never be loosened".[citation needed] Comparable is also Numbers 5:11ff, where a confirmed adulteress is punished with swelling of the abdomen.