Myelolipomas can present in the adrenal gland,[2] or outside of the gland.[3]

Although several hypotheses have been proposed as to the cause of myelolipoma, the causative process is still not clearly understood.[4] Recent experimental evidence suggests that both the myeloid and lipomatous elements have a monoclonal origin, which strongly supports the hypothesis that myelolipomas are neoplastic lesions.[4]

Older theories proposing a non-neoplastic origin include the following:

Myelolipomas are rare. They have been reported to be found unexpectedly at autopsy in 0.08% to 0.4% of cases (i.e.: somewhere between 8 per 10,000 and 4 per 1,000 autopsies). They most commonly occur in the adrenal gland, yet only comprise about 3% of all adrenal tumours. They may also occur in other sites, such as the mediastinum, the liver and the gastrointestinal tract.[1]

There is no gender predilection, males and females are affected equally. The peak age range at diagnosis is between 40 and 79 years of age.[1].

The majority of myelolipomas are asymptomatic. Most do not produce any adrenal hormones. Most are only discovered as a result of investigation for another problem.[6]

When myelolipomas do produce symptoms, it is usually because they have become large, and are pressing on other organs or tissues nearby. Symptoms include pain in the abdomen or flank, blood in the urine, a palpable lump or high blood pressure[1].

As they are benign tumors, myelolipomas do not spread to other body parts. Larger myelolipomas are at risk of localised tissue death and bleeding, which may cause a retroperitoneal haemorrhage[1]. 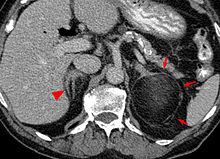 Most myelolipomas are unexpected findings on CT scans and MRI scans of the abdomen. They may sometimes be seen on a plain X-ray films.[6]

Fine needle aspiration may be performed to obtain cells for microscopic diagnosis.[1].

Small myelolipomas generally do not produce symptoms, and do not require treatment. Ongoing surveillance of these lesions by a doctor is recommended. Surgical excision (removal) is recommended for large myelolipomas because of the risk of bleeding complications.[5]

Myelolipomas are usually found to occur alone in one adrenal gland, but not both. They can vary widely in size, from as small as a few millimetres to as large as 34 centimeters in diameter. The cut surface has colours varying from yellow to red to mahogany brown, depending on the distribution of fat, blood, and blood-forming cells. The cut surface of larger myelolipomas may contain haemorrhage or infarction.[1] 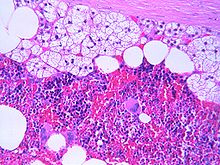 The microscopic view of a myelolipoma shows the presence of normal adrenal cells, fat (adipose) cells, and the three lineages of the myeloid precursors

The typical microscopic features of myelolipomas are shown in the image. There is a mixture of normal adrenal tissue, fat, and a full trilineage maturation of the three major blood-forming elements: myeloid (white blood cell forming), erythroid (red blood cell forming), and megakaryocytic (platelet forming) lines.[1]