Hyperplasia (or "hypergenesis") means increase in number of cells/proliferation of cells. It may result in the gross enlargement of an organ and the term is sometimes mixed with benign neoplasia/ benign tumor. 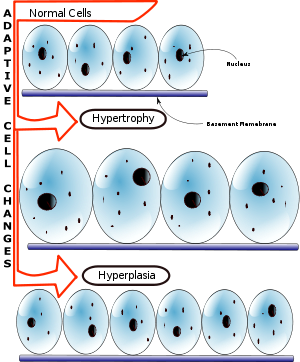 Simple illustration to show the difference between hyperplasia and hypertrophy.

Hyperplasia is considered to be a physiological (normal) response to a specific stimulus, and the cells of a hyperplastic growth remain subject to normal regulatory control mechanisms. This stands in contrast to neoplasia (the process underlying cancer and benign tumors), in which genetically abnormal cells proliferate in a non-physiological manner which is unresponsive to normal stimuli.[2]

Hyperplasia may be due to any number of causes, including increased demand (for example, proliferation of basal layer of epidermis to compensate skin loss), chronic inflammatory response, hormonal dysfunctions, or compensation for damage or disease elsewhere. Hyperplasia may be harmless and occur on a particular tissue. An example of a normal hyperplastic response would be the growth and multiplication of milk-secreting glandular cells in the breast as a response to pregnancy, thus preparing for future breast feeding.

Hyperplasia may also be induced artificially by injecting hormones such as IGF-1 and human growth hormone. Perhaps the most interesting and potent effect IGF has on the human body is its ability to cause hyperplasia, which is an actual splitting of cells.[original research?] By contrast, hypertrophy is what occurs, for example, to skeletal muscle cells during weight training and steroid use and is simply an increase in the size of the cells. With IGF use, one is able to cause hyperplasia which actually increases the number of muscle cells present in the tissue. Weight training with or without anabolic steroid use enables these new cells to mature in size and strength. In addition, animal tests have shown that stretching a muscle can trigger hyperplasia, though this phenomenon has yet to be confirmed in humans. Hyperplasia may also be induced through specific power output training for athletic performance, thus increasing the number of muscle fibers instead of increasing the size of a single fiber.[3]

Hyperplasia may also occur abnormally, and is associated with a variety of clinical diseases.

Examples in human biology and disease 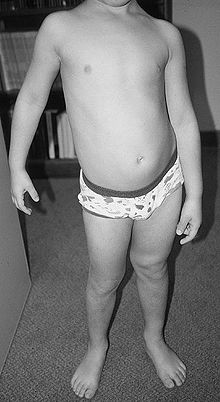 Patient with hemihyperplasia involving the upper and lower right extremities. The leg length discrepancy can be noted by the pelvic tilt.