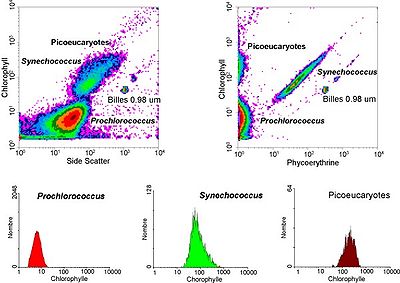 Flow cytometry (abbreviated: FCM) is a technique for counting and examining microscopic particles, such as cells and chromosomes, by suspending them in a stream of fluid and passing them by an electronic detection apparatus. It allows simultaneous multiparametric analysis of the physical and/or chemical characteristics of up to thousands of particles per second. Flow cytometry is routinely used in the diagnosis of health disorders, especially blood cancers, but has many other applications in both research and clinical practice. A common variation is to physically sort particles based on their properties, so as to purify populations of interest.

The first impedance-based flow cytometry device, using the Coulter principle, was disclosed in U.S. Patent 2,656,508, issued in 1953, to Wallace H. Coulter. Mack Fulwyler was the inventor of the forerunner to today's flow cytometers - particularly the cell sorter.[1] Fulwyler developed this in 1965 with his publication in Science.[2] The first fluorescence-based flow cytometry device (ICP 11) was developed in 1968 by Wolfgang Göhde from the University of Münster, filed for patent on 18th December 1968[3] and first commercialized in 1968/69 by German developer and manufacturer Partec through Phywe AG in Göttingen. At that time, absorption methods were still widely favored by other scientists over fluorescence methods.[4] Soon after, flow cytometry instruments were developed, including the Cytofluorograph (1971) from Bio/Physics Systems Inc. (later: Ortho Diagnostics), the PAS 8000 (1973) from Partec, the first FACS instrument from Becton Dickinson (1974), the ICP 22 (1975) from Partec/Phywe and the Epics from Coulter (1977/78).

Name of the technology

A beam of light (usually laser light) of a single wavelength is directed onto a hydrodynamically-focused stream of liquid. A number of detectors are aimed at the point where the stream passes through the light beam: one in line with the light beam (Forward Scatter or FSC) and several perpendicular to it (Side Scatter or SSC) and one or more fluorescent detectors. Each suspended particle from 0.2 to 150 micrometers passing through the beam scatters the ray, and fluorescent chemicals found in the particle or attached to the particle may be excited into emitting light at a longer wavelength than the light source. This combination of scattered and fluorescent light is picked up by the detectors, and, by analysing fluctuations in brightness at each detector (one for each fluorescent emission peak), it is then possible to derive various types of information about the physical and chemical structure of each individual particle. FSC correlates with the cell volume and SSC depends on the inner complexity of the particle (i.e., shape of the nucleus, the amount and type of cytoplasmic granules or the membrane roughness). This is because the light is scattered off of the internal components of the cell. Some flow cytometers on the market have eliminated the need for fluorescence and use only light scatter for measurement. Other flow cytometers form images of each cell's fluorescence, scattered light, and transmitted light. 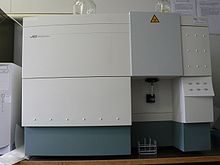 Modern flow cytometers are able to analyze several thousand particles every second, in "real time," and can actively separate and isolate particles having specified properties. A flow cytometer is similar to a microscope, except that, instead of producing an image of the cell, flow cytometry offers "high-throughput" (for a large number of cells) automated quantification of set parameters. To analyze solid tissues, a single-cell suspension must first be prepared.

The process of collecting data from samples using the flow cytometer is termed 'acquisition'. Acquisition is mediated by a computer physically connected to the flow cytometer, and the software which handles the digital interface with the cytometer. The software is capable of adjusting parameters (i.e. voltage, compensation, etc.) for the sample being tested, and also assists in displaying initial sample information while acquiring sample data to insure that parameters are set correctly. Early flow cytometers were, in general, experimental devices, but technological advances have enabled widespread applications for use in a variety of both clinical and research purposes. Due to these developments, a considerable market for instrumentation, analysis software, as well as the reagents used in acquisition such as fluorescently-labeled antibodies has developed.

The data generated by flow-cytometers can be plotted in a single dimension, to produce a histogram, or in two-dimensional dot plots or even in three dimensions. The regions on these plots can be sequentially separated, based on fluorescence intensity, by creating a series of subset extractions, termed "gates." Specific gating protocols exist for diagnostic and clinical purposes especially in relation to hematology.

The plots are often made on logarithmic scales. Because different fluorescent dyes' emission spectra overlap,[6] signals at the detectors have to be compensated electronically as well as computationally. Data accumulated using the flow cytometer can be analyzed using software, e.g., WinMDI[7] (only one which is freeware), Flowjo, FCS Express, VenturiOne, CellQuest Pro, or Cytospec.[8] Once the data are collected, there is no need to stay connected to the flow cytometer. For this reason, analysis is most often performed on a separate computer. This is especially necessary in core facilities where usage of these machines is in high demand.

Recent progress on automated population identification using computational methods has offered an alternative to traditional gating strategies. Automated identification systems could potentially help findings of rare and hidden populations. Representative automated methods include FLOCK [9] in Immunology Database and Analysis Portal (ImmPort),[10] FLAME [11] in GenePattern and flowClust,[12][13][14] in Bioconductor. Collaborative efforts have resulted in an open project called FlowCAP (Flow Cytometry: Critical Assessment of Population Identification Methods,[15]) to provide an objective way to compare and evaluate the flow cytometry data clustering methods, and also to establish guidance about appropriate use and application of these methods.

Fluorescence-activated cell sorting (FACS) is a specialized type of flow cytometry. It provides a method for sorting a heterogeneous mixture of biological cells into two or more containers, one cell at a time, based upon the specific light scattering and fluorescent characteristics of each cell. It is a useful scientific instrument, as it provides fast, objective and quantitative recording of fluorescent signals from individual cells as well as physical separation of cells of particular interest. The acronym FACS is trademarked and owned by Becton, Dickinson and Company.[16] Among the large majority of researchers who use this technology for sorting or analysis, this term has become generic in common usage, much like xerox or kleenex. The first cell sorter was invented by Mack Fulwyler in 1965, using the Coulter principle, a relatively difficult technique and one no longer used in modern instruments. The technique was expanded by Len Herzenberg, who was responsible for coining the term FACS[17]. Herzenberg won the Kyoto Prize in 2006 for his seminal work in flow cytometry.

The cell suspension is entrained in the center of a narrow, rapidly flowing stream of liquid. The flow is arranged so that there is a large separation between cells relative to their diameter. A vibrating mechanism causes the stream of cells to break into individual droplets. The system is adjusted so that there is a low probability of more than one cell per droplet. Just before the stream breaks into droplets, the flow passes through a fluorescence measuring station where the fluorescent character of interest of each cell is measured. An electrical charging ring is placed just at the point where the stream breaks into droplets. A charge is placed on the ring based on the immediately prior fluorescence intensity measurement, and the opposite charge is trapped on the droplet as it breaks from the stream. The charged droplets then fall through an electrostatic deflection system that diverts droplets into containers based upon their charge. In some systems, the charge is applied directly to the stream, and the droplet breaking off retains charge of the same sign as the stream. The stream is then returned to neutral after the droplet breaks off.

A wide range of fluorophores can be used as labels in flow cytometry. Fluorophores, or simply "fluors", are typically attached to an antibody that recognises a target feature on or in the cell; they may also be attached to a chemical entity with affinity for the cell membrane or another cellular structure. Each fluorophore has a characteristic peak excitation and emission wavelength, and the emission spectra often overlap. Consequently, the combination of labels which can be used depends on the wavelength of the lamp(s) or laser(s) used to excite the fluorochromes and on the detectors available.[18] The maximum number of distinguishable fluorescent labels is thought to be 17 or 18, and this level of complexity necessitates laborious optimization to limit artifacts, as well as complex deconvolution algorithms to separate overlapping spectra.[19] 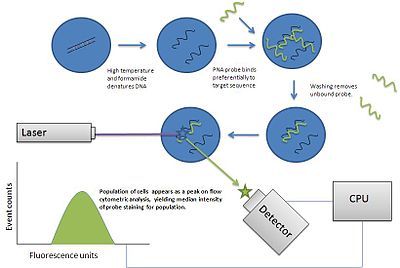 Quantum dots are sometimes used in place of traditional fluorophores because of their narrower emission peaks.

In one approach to overcoming the fluorescent labeling limit, lanthanide isotopes are attached to antibodies. This method could theoretically allow the use of 40 to 60 distinguishable labels and has been demonstrated for 30 labels.[19] Cells are introduced into a plasma, ionizing them and allowing time-of-flight mass spectrometry to identify the associated isotopes. Although this method permits the use of a large number of labels, it currently has lower throughput capacity than traditional flow cytometry. It also destroys the analysed cells, precluding their recovery by sorting.[19]

The technology has applications in a number of fields, including molecular biology, pathology, immunology, plant biology and marine biology. It has broad application in medicine (especially in transplantation, hematology, tumor immunology and chemotherapy, prenatal diagnosis, genetics and sperm sorting for sex preselection). In marine biology, the autofluorescent properties of photosynthetic plankton can be exploited by flow cytometry in order to characterise abundance and community structure. In protein engineering, flow cytometry is used in conjunction with yeast display and bacterial display to identify cell surface-displayed protein variants with desired properties.