Steven Chu (born February 28, 1948)[2] is an American physicist and the 12th United States Secretary of Energy. Chu is known for his research at Bell Labs in cooling and trapping of atoms with laser light, which won him the Nobel Prize in Physics in 1997, along with his scientific colleagues Claude Cohen-Tannoudji and William Daniel Phillips.[2] At the time of his appointment as Energy Secretary, he was a professor of physics and molecular and cellular biology at the University of California, Berkeley and the director of the Lawrence Berkeley National Laboratory, where his research was concerned primarily with the study of biological systems at the single molecule level.[3] Previously, he had been a professor of physics at Stanford University. He is a vocal advocate for more research into alternative energy and nuclear power, arguing that a shift away from fossil fuels is essential to combating climate change.[4][5][6] For example, he has conceived of a global "glucose economy", a form of a low-carbon economy, in which glucose from tropical plants is shipped around like oil is today.[7]

Chu, a Chinese American,[8] was born in St. Louis, Missouri, with ancestry from Taicang, in Jiangsu province,[9] and graduated from Garden City High School.[10] He received both a B.A. in mathematics and a B.S. in physics in 1970 from the University of Rochester. He went on to earn his Ph.D. in physics from the University of California, Berkeley, in 1976, during which he was supported by a National Science Foundation Graduate Research Fellowship.[11]

Chu comes from a family of scholars. His father earned an advanced chemical engineering degree at the Massachusetts Institute of Technology and taught at Washington University in St. Louis and Brooklyn Polytechnic Institute, while his mother studied economics. His maternal grandfather, Dr. Shu-tian Li earned a Ph.D. degree from Cornell University and his mother's uncle, Li Shu-hua, a notable physical scientist, studied physics at the Sorbonne before they returned to China.[2] His older brother Gilbert Chu is a professor and researcher of biochemistry and medicine at Stanford University. His younger brother, Morgan Chu, is a partner and the former Co-Managing Partner at the law firm Irell & Manella LLP.[12] According to Chu, his two brothers and four cousins earned three M.D.s, four Ph.D.s, and a J.D. among them. In 1997, he married Jean Fetter, a British American and an Oxford-trained physicist.[8] He has two sons, Geoffrey and Michael, from a previous marriage to Lisa Chu-Thielbar.[2]

Beside his scientific career, Chu has also developed interest in various sports, including baseball, swimming and cycling. He taught himself tennis by reading a book in the eighth grade, and was a second-string substitute for the school team for three years. He also taught himself how to pole vault using bamboo poles obtained from the local carpet store.[2] Chu said he never learned to speak Chinese because his parents always talked to him and his brothers in English, although he said (in 1997) that he was trying to learn Mandarin, believing that if he could stay in China for "at least six months", he would become fluent.[8]

After obtaining his doctorate degree, Chu remained at Berkeley as a postdoctoral researcher for two years before joining Bell Labs, where he and his several co-workers carried out his Nobel Prize-winning laser cooling work. He left Bell Labs and became a professor of physics at Stanford University in 1987,[2] serving as the chair of its Physics Department from 1990 to 1993 and from 1999 to 2001. While at Stanford, Chu, together with three other professors, initiated the Bio-X program, which focuses on interdisciplinary research in biology and medicine,[13] and played an important role in securing the funding of the Kavli Institute for Particle Astrophysics and Cosmology.[14] In August 2004, Chu was appointed as the director of the Lawrence Berkeley National Laboratory, a U.S. Department of Energy National Laboratory, and joined UC Berkeley's Department of Physics and Department of Molecular and Cell Biology.[15] Under Chu's leadership, the Lawrence Berkeley National Laboratory has been a center of research into biofuels and solar energy technologies.[4] He spearheaded the laboratory's Helios project, an initiative to develop methods of harnessing solar power as a source of renewable energy for transportation.[15]

Chu's early research focused on atomic physics by developing laser cooling techniques and the magneto-optical trapping of atoms using lasers. He and his co-workers at Bell Labs developed a method of cooling atoms by employing six laser beams opposed in pairs and arranged in three directions at right angles to each other. Trapping atoms with this method allows scientists to study, with great accuracy, individual atoms which exist in the air, and determine their inner structure. Additionally, it is believed that a technique can be developed with this method to construct an atomic clock with great precision.[16]

While at Stanford, Chu's research interests expanded into biological physics and polymer physics at the single molecular level. In the field of biological physics, he studied enzyme activity and protein and RNA folding using techniques such as fluorescence resonance energy transfer, atomic force microscopy, and optical tweezers. Chu's research in polymer physics made use of individual molecules of DNA to study polymer dynamics and phase transitions associated with these dynamics. He further continued his research in atomic physics as well, developing new methods of laser cooling and trapping.[17]

Chu has been a vocal advocate for more research into alternative energy and nuclear power, arguing that a shift away from fossil fuels is essential to combat global warming.[4][5][6] He also spoke at the 2009 and 2011 National Science Bowl about the importance of America's science students, emphasizing their future role in environmental planning and global initiative. Chu said that a typical coal power plant emits 100 times more radiation than a nuclear power plant.[18]

Chu warns that global warming could wipe out California farms within the century.[19]

He has joined the Copenhagen Climate Council,[20] an international collaboration between business and science, established to create momentum for the 2009 United Nations Climate Change Conference in Copenhagen.

Chu was instrumental in submitting a winning bid for the Energy Biosciences Institute, a BP-funded $500 million multi-disciplinary collaborative project between UC Berkeley, the Lawrence Berkeley Lab and the University of Illinois. This sparked controversy on the Berkeley campus, where some fear the alliance could harm the school’s reputation for academic integrity.[21][22][23][24]

Based partially on his research at UC Berkeley, Chu has speculated that a global "glucose economy", a form of a low-carbon economy, could replace the current system. In the future, special varieties of high-glucose plants would be grown in the tropics, processed, and then the chemical would be shipped around like oil is today to other countries. The St. Petersburg Times has stated that Chu's concept "shows vision on the scale needed to deal with global warming."[7]

Chu has also advocated making the roofs of buildings and the tops of roads around the world white or other light colors, which could possibly reflect a lot of sunlight back into space and significantly mitigate global warming. The effect would be, according to Chu, similar to taking every car in the world off the roads for about 11 years.[7] Samuel Thernstrom, a resident fellow at the American Enterprise Institute and co-director of the AEI Geoengineering Project, expressed support in The American and remarked "Chu has done the nation a service" since "the idea has an important role to play in the climate debate."[25]

Dr. Chu received an honorary doctorate from Boston University when he was the keynote speaker at the 2007 commencement exercises.[27] He is a Senior Fellow of the Design Futures Council.[28] Diablo magazine, based east of Berkeley in Walnut Creek, California, honored Dr. Chu with one of its annual Eco Awards in its April 2009 issue,[29] shortly after he was nominated as energy secretary. Washington University in St. Louis and Harvard University awarded him an honorary doctorate during their 2010 and 2009 commencement exercises, respectively.[30][31] He was also awarded an honorary degree from Yale University during its 2010 commencement.[32] 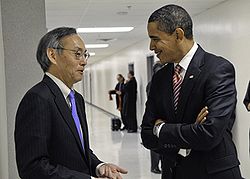 His nomination to be Secretary of Energy was unanimously confirmed by the U.S. Senate on January 20, 2009.[33] On January 21, 2009, Chu was sworn in as Secretary of Energy in the Barack Obama administration. Chu is the first person appointed to the US Cabinet after having won a Nobel Prize.[34] He is also the second Chinese American to be a member of the US Cabinet after Elaine Chao.[35]

Under his leadership in 2010 the Department of Energy updated the water usage regulations on toilets and showers.[39]

In March 2011 Chu said that federal regulators should not delay approving construction licenses for planned U.S. nuclear power plants because of the Fukushima Daiichi nuclear disaster. "I think those things can proceed," Chu told reporters on Capitol Hill, referring to construction license applications pending at the U.S. Nuclear Regulatory Commission.[40]

In August 2011 Chu praised an advisory panel’s report on curbing the environmental risks of natural-gas development. Chu responded to the panel’s report on hydraulic fracturing, the controversial drilling method that’s enabling a U.S. gas boom while bringing fears of groundwater contamination and other harms along with it. The report called for greater data collection of air and water data, as well as “rigorous” air pollution standards and mandatory disclosure of chemicals used in the hydraulic fracturing process, among other steps. “The report ... recommends a range of tools for implementing these measures, including regulation, continuous improvement in best practices by industry, and ongoing research and development,” Chu said in a statement. “I will be working closely with my colleagues in the Administration to review the recommendations and to chart a path for continued development of this vital energy resource in a safe manner,” he added.[41]