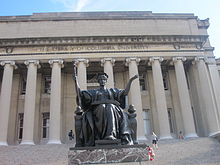 Alma Mater statue at the University of Illinois at Urbana-Champaign

Alma mater (Latin: "nourishing mother"), pronounced UK: /ˈælmə ˈmeɪtər/, US: /ˈɑːlmə ˈmɑːtər/), was used in ancient Rome as a title for various mother goddesses, especially Ceres or Cybele,[1] and in Christianity for the Virgin Mary.

In modern times, it is often any school, college, or university at which one has studied and, usually, from which one has graduated.[2] The term may also refer to a song or hymn associated with a school.[3]

The expression is almost always used in the singular form, but the Latin plural is almae matres.

Alma Mater Studiorum ("Nourishing Mother of Studies") is the motto and original name of the University of Bologna,[4] the oldest continually operating university in the world, and other European universities, such as the Alma Mater Lipsiensis in Leipzig, Germany, have also used the expression in their names.

On the campus of Columbia University on the steps of Low Library there is a well known bronze statue of Alma Mater by Daniel Chester French. The University of Illinois at Urbana-Champaign also has an Alma Mater statue by Lorado Taft. A mural in Yale University's Sterling Memorial Library depicts alma mater as a bearer of light and truth standing in the midst of the personified arts and sciences, painted in 1932 by Eugene Savage. Outside the United States there is another sculpture of Alma Mater on the steps of the monumental entrance to the Universidad de La Habana, in Havana, Cuba. The statue was cast in 1919 by Mario Korbel, and installed in its current scenic location in 1927 under the direction of architect Raul Otero.

"Alma mater" is also used as a song title outside academia.

The Wiktionary definition of alma mater