:"For the , see . For other uses, see ":"This article refers to the Roman goddess of agriculture. If you are looking for the Greek deity, see .Infobox Greek deity 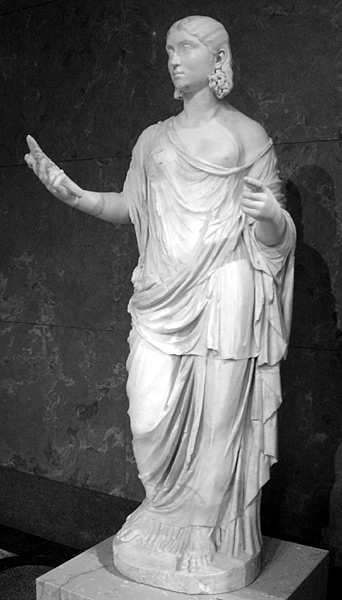 Caption = This statue depicting Ceres holding wheat is on display at the Louvre in Paris, France.
Name = Ceres
God_of = Goddess of growing plants and motherly love
Abode =
Symbol =
Consort =
Parents = Saturn and
Siblings=
Children=
Mount =
Roman_equivalent = In , Ceres is the of growing plants (particularly s) and of motherly love. Ceres was worshipped in , and is today still worshipped in Religio Romana Neopaganism. Ceres was usually equated with the Greek goddess .

Her name may derive from the hypothetical Proto-Indo-European root "ker", meaning "to grow", which is also the root for the words "create" and "increase".

Ceres was the daughter of Saturn and , wife-sister of Jupiter, mother of by Jupiter and sister of Juno, Vesta, Neptune and Pluto. Works of art depicted Ceres conventionally with a , a basket of s and , and a made of corn ears (note that "corn" in this instance refers to , , or some other old world food grain, not to the new world food grain , which is called "corn" in the United States and some other areas of the ).

Ceres was also patron of , . According to legend, she begged Jupiter that Sicily be placed in the heavens. The result, because the island is triangular in shape, was the constellation , an early name of which was "Sicilia". Ceres made up a trinity with Liber and Libera, who were two other agricultural gods. She also had twelve minor gods who assisted her, and were in charge of specific aspects of farming: "Vervactor who turns fallow land, Reparator who prepares fallow land, Imporcitor who plows with wide furrows" (whose name comes from the Latin "imporcare", to put into furrows), "Insitor who sowed, Obarator who plowed the surface, Occator who harrowed, Sarritor who weeded, Subruncinator who thinned out, Messor who harvested, Conuector who carted, Conditor who stored, and Promitor who distributed". [http://students.roanoke.edu/groups/relg211/ashby/Ceres.html]

The Romans adopted Ceres in during a devastating famine, when the advised the adoption of her Greek equivalent , along with Kore (Persephone) and (possibly ). Ceres was personified and celebrated by women in secret rituals at the festival of , held during May. There was a to Ceres on the in and her official priest was called a flamen. Her primary festival was the or "Ludi Ceriales" ("games of Ceres"), instituted in the and held annually on to . The worship of Ceres became particularly associated with the classes, who dominated the grain trade. Little is known about the rituals of Cerelean worship; one of the few customs which has been recorded was the peculiar practice of tying lighted brands to the tails of foxes which were then let loose in the . There was also an October festival dedicated to her when women fasted and offered her the first grain of the harvest.

The word s derives from Ceres, commemorating her association with edible grains. Statues of Ceres top the domes of the and the serving as a reminder of the importance of agriculture in the states' economies and histories. There is also a statue of her on top of the , which conducts trading in agricultural commodities.

* [http://www.novaroma.org/religio_romana/deities.html Gods and Goddesses of Rome]
* [http://www.unrv.com/culture/major-roman-god-list.php Major Gods of the Roman Pantheon]