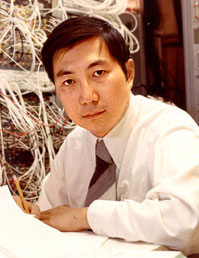 Samuel Chao Chung Ting ( _zh. 丁肇中; : Dīng Zhàozhōng; : Ting¹ Chao⁴-chung¹) (born , ) is an American who received the in , with , for discovering the subatomic .

Ting's ancestry is (日照縣), , on . His parents, Kuan-hai Ting (丁觀海) and Tsun-ying Jeanne Wang (王雋英), met as graduate students in Michigan and moved back to the warring when Samuel Ting was an infant. As a result, Samuel Ting's formal childhood education had been discontinuous and sporadic, and he was mostly home-schooled by his parents, who later became professors of and , respectively, at in , . His formal education began at twelve at the prestigious Provincial Chien-Kuo High School (建國中學, now Municipal Taipei Chien-Kuo Senior High School) in Taipei. After high school, he studied one year at , Tainan City.

When Ting returned to the United States in his twenties, he studied , and at the . In 1959 he was awarded BSEs in both mathematics and physics, and in 1962 he earned a doctorate in physics. In 1963 he worked at the European Organization for Nuclear Research, which would later become . From 1965 he taught at , and worked at the Deutsches Elektronen-Synchrotron (DESY) in . Since 1969 Ting has been a professor at the (MIT).

In 1995, not long after the cancellation of the project had severely reduced the possibilities for experimental high-energy physics on earth, Ting proposed the , a space-borne cosmic-ray detector. He has since been directing the work on what the "New York Times" has called "one of the most expensive scientific experiments ever built," with costs of US$1.5 billion as of 2007.

Ting is a member of the U.S. National Academy of Sciences, an of the , and an of 's .

In 1960 Ting married Kay Kuhne, and together have two daughters, Jeanne and Amy. Since 1985 he has been married to Dr. Susan Carol Marks, and they have one son, Christopher, who is currently a consultant at Booz Allen Hamilton in Washington, DC.