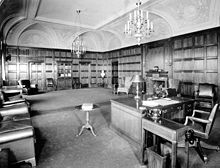 The Commerce Secretary's office as it looked in the mid-20th century.

The line of succession for the Secretary of Commerce is as follows:[4]