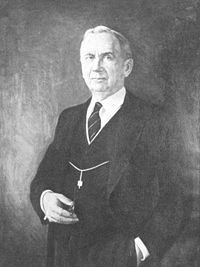 Daniel Calhoun Roper graduated from Duke University (then called "Trinity College") in 1888, and received his bachelor of laws from National University in 1901.

Immediately following and through 1916, he served as first assistant postmaster general, and was chairman of Woodrow Wilson's reelection campaign in 1916. He was the chairman of the 1917 U.S. Tariff Commission and served as Commissioner of Internal Revenue from 1917 to 1920. He served as the Secretary of Commerce between 1933 and 1938, and as Ambassador to Canada in 1939.

Roper's Letter of Credence was accepted personally by George VI, King of Canada, at La Citadelle in Quebec City, on May 17, 1939. It was the King's first official duty as King of Canada on Canadian soil.[1]

In 1939 his family, friends and political colleagues celebrated his 50th wedding anniversary to Lou McKenzie, and in 1941 he published his autobiography entitled Fifty Years of Public Life (Duke University Press). Daniel Roper died in 1943 in Washington, D.C..