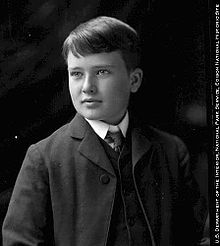 Charles Edison (August 3, 1890 – July 31, 1969) was son of Thomas Edison to Mina, businessman, Assistant and then United States Secretary of the Navy, and served as the 42nd Governor of New Jersey.

Born at his parents' home, Glenmont, in West Orange, New Jersey, he attended the Hotchkiss School in Lakeville, Connecticut. In 1915-1916 he operated the one hundred seat "Little Thimble Theater" with Greenwich Village figure Guido Bruno. There they played the works of Shaw and Strindberg while Charles contributed verse to "Bruno's Weekly" under the pseudonym "Tom Sleeper". Late in 1915, he brought his players Ellis Island to perform for Chief Clerk Augustus Sherman and more than four hundred detained immigrants. These avant-garde activities came to a halt when his father put him to work. He married Carolyn Hawkins on March 27, 1918. They had no children. For a number of years Charles Edison ran Edison Records. Charles became president of his father's company Thomas A. Edison, Inc. in 1927, and ran it until it was sold in 1957, when it merged with the McGraw Electric Company to form the McGraw-Edison Electric Company. Edison was board chairman of the merged company until he retired in 1961.[1]

On January 18, 1937, President Roosevelt appointed Charles Edison as Assistant Secretary of the Navy, then as Secretary on January 2, 1940, Claude A. Swanson having died several months previously.[2] Edison himself only kept the job until June 24, resigning to run his gubernatorial campaign. During his time in the Navy department, he advocated construction of the large Iowa-class battleships, and that one of them be built at the Philadelphia Navy Yard, which secured votes for Roosevelt in Pennsylvania and New Jersey in the 1940 presidential election; in return, Roosevelt had BB-62 named the USS New Jersey.[3]

In 1940, he won election as Governor of New Jersey, running in reaction to the political machine run by Frank Hague, but broke with family tradition by declaring himself a Democrat. As governor, he proposed updating the New Jersey State Constitution. Although it failed in a referendum and nothing was changed during his tenure, state legislators did reform the constitution later.[1] In 1948, he established a charitable foundation, originally called "The Brook Foundation", now the Charles Edison Fund.[4]

Between 1951 and 1969, he lived in the Waldorf-Astoria Hotel, where he struck up a friendship with Herbert Hoover, who also lived there.[5] In 1962, Edison was one of the founders of the Conservative Party of New York State.[6]

In 1967, Edison hosted a meeting at the Waldorf-Astoria in New York that led to the founding of the Charles Edison Youth Fund, later the Charles Edison Memorial Youth Fund. Attending the meeting were Rep. Walter Judd (R-Mn), author William F. Buckley, organizer David Jones, and Edison's political advisor Marvin Liebman. The name of the organization was changed in 1985 to The Fund for American Studies,[7] in keeping with Edison's request to drop his name after 20 years of use. 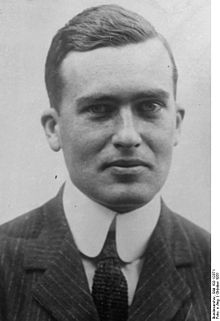 His personal mascot was the owl, and he collected objects depicting owls. Charles Edison died on July 31, 1969 in New York City.[8] He is buried in Rosedale Cemetery in Orange, New Jersey.