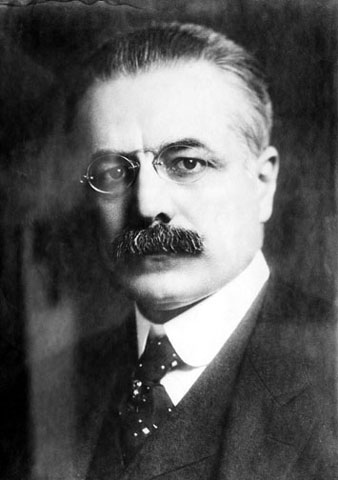 George Bruce Cortelyou (, &ndash; , ) was an American secretary of the early 20th century.

Born to Rose Seery and Peter Crolius Cortelyou, and part of an old family whose immigrant ancestor arrived in 1652, he was educated at public schools in , the in , and the on . At the age of 20, he received a BA degree from , a teacher's college in . He then studied at and graduated from law schools of and (the latter now being ). Courtelyou then began teaching, later taking a course and mastering .

George Cortelyou was serving as President William McKinley's secretary in Buffalo, New York on September 6, 1901. McKinley was greeting visitors in the Temple of Music at the Pan-American Exposition. The president was shot twice by assassin, Leon Czolgosz. President McKinley was caught and supported by his aides, he whispered, " My wife -- be careful, Cortelyou, how you tell her -- oh, be careful."

New president Theodore Roosevelt charged Cortelyou with transforming the White House into a more professional organization. Cortelyou developed procedures and rules that guided White House protocol and established processess where there had been only personal prerogative. Cortelyou is also credited with establishing a line of communication between the President's office and the press: he provided reporters with their own workspace, briefed journalists on notable news, handed out press releases and selected news items to bring to the President's attention. These "current clippings" were the first attempt by a President to gauge through the media. Cortelyou selected items objectively, a practice that would not be consistently followed by his successors.

Cortelyou also served as chairman of from 1904 through 1907, working for the successful re-election of Roosevelt.

Cortelyou was Secretary of the Treasury during the devastating . Like his predecessor, Treasury Secretary , Cortelyou believed it was Treasury's duty to protect the banking system, but he realized that the Treasury was not equipped to maintain economic stability.

He eased the crisis by depositing large amounts of government funds in national banks and buying government bonds. To prevent further crises, Cortelyou advocated a more elastic currency and recommended the creation of a central banking system. In 1908, the was passed, providing special currency to be issued in times of panic, and creating a commission, which led to the creation of the in 1913.

He returned to private enterprise as the president of the Consolidated Gas Company, later .

He died in , in 1940. He is buried in the Memorial Cemetery of St. John's Church in . Brooklyn's Cortelyou Road, in the Flatbush section, was named for him.