The Academia Sinica (Chinese: 中央研究院; pinyin: Zhōngyāng Yánjiùyuàn, literally "Central Research Academy"; "Chinese Academy" in Latin), headquartered in the Nangang District of Taipei, is the national academy of Taiwan. It supports research activities in a wide variety of disciplines, ranging from mathematical and physical sciences, to life sciences, and to humanities and social sciences.

Academia Sinica has made great progress in recent years, according to Taiwanese scholar Chang Jui-te. An increasing number of research papers written by its faculty members, which numbered 1,150 in 2001, are appearing in international journals.[1] Some journals, published by Academia Sinica itself, such as Zoological Studies and Statistical Sinica, have received international recognition.[1] Academia Sinica plays a major role in the field of Chinese studies. For example, the archaeological findings by researchers at the Institute of History and Philology have, in combination with written documents, led to a virtual rewriting of ancient Chinese history, pushing back the span of Chinese history by many centuries.[1] 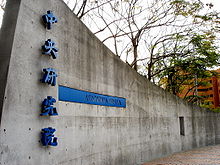 The Academia Sinica was founded in mainland China in 1928 by the Guomindang Nationalist Government, its first meeting being held at Shanghai's famous East Asia Restaurant. Its first president was Cai Yuanpei, succeeded by Zhu Jiahua in 1940. It shares the same root and the same Latin name with current Chinese Academy of Sciences in Beijing. After Chinese Civil War, Academia Sinica was re-established in Taipei following relocation of the ROC government from Nanjing to Taipei. Unlike the mainland Chinese counterpart, which is exclusively composed of institutes in the natural sciences, Taiwan's Academia Sinica covers three major academic divisions:

The academy was envisioned as an organization that would oversee and coordinate scientific, social science, and humanistic research in all of the Republic of China's state-sponsored research institutes and universities. Unlike other government-sponsored research institutes which are responsible to relevant Executive Yuan ministries, Academia Sinica, as the nation's premier research institution, is directly responsible to the President of the Republic of China. Thus Academia Sinica enjoys autonomy in formulating its own research objectives. In addition to academic research on various subjects in the sciences and humanities, Academia Sinica's major tasks also include providing guidelines, channels of coordination, and incentives with a view to raising academic standards in the country.

At the time of Academia Sinica's founding there were already a number of other, smaller institutes in several Chinese cities. Academia Sinica incorporated a number of these into its organization, and rapidly built nine institutes: meteorology, astronomy, physics, chemistry, geology, engineering, psychology, history and philology, and sociology, most of which were located in the new capital city of Nanjing.

In each institute and research center, tenure-tracked Research Fellows (equivalent to the tenure-tracked professors of the university) form research groups and carry out their studies supported by the intramural funds as well as external grants. In addition students from other countries are frequently hosted as summer interns.

Graduate and other education programs

Since 2004, Academia Sinica set up the Taiwan International Graduate Program (TIGP),[2] open to local and international students for Ph.D. programs. All courses at TIGP are conducted in English. Students can choose their advisor among a faculty selected for the program out of outstanding researcher and professors appointed at Academia Sinica or at one of the partner universities (or both). Currently, admittance to the programme guarantees a monthly stipend of 32.000 NTD, roughly 1.000 USD or 715 Euros. Applications can normally be sent starting in December and the submission deadline is usually set on the 31st of March, for enrolment in September of the same year. Lectures start around the middle of September and end around the middle of June, with slight variations mostly depending on the partner university academic calendar.

Students enrolled in the TIGP program engage in activities other than academic ones regularly and are federated in the Graduate Students Association (GSA). The GSA council includes 18 elected representatives (two for each program) and one president (elected by the council).

The Convocation of the Academia Sinica[3] consists of 241 Academicians, including 83 domestic and 158 overseas appointed scientist. Seven Academicians of Academia Sinica are Nobel laureates.[4] Academician membership is an honorary lifetime privilege without remuneration. They do not necessarily perform research or reside at the Academia Sinica campus. According to their own expertise, academicians are grouped into three divisions: Mathematics and Physical Sciences, Life Sciences, and Social Sciences and Humanities. A maximum number of ten new members is allocated to each of the three divisions during the biennial Convocation. The eligibility of the academicians is not restricted to the residents of Taiwan or ROC citizens, although the academicians all have Chinese heritage. More than half of the academicians are overseas scholars and scientists.

Academia Sinica's current President is Dr. Chi-Huey Wong, a biochemist, who replaced Dr. Yuan Tseh Lee, a physical chemist and Nobel Laureate in Chemistry, as the 9th president on October 19, 2006. The list of past Presidents also includes Hu Shih in 1957. A philosopher and essayist, he was a key contributor to Chinese liberalism and language reform in his advocacy for the use of vernacular Chinese, as well as an influential redology scholar and holder of the Jiaxu manuscript (Chinese: 甲戌本; pinyin: Jiǎxū běn) until his death.