Sea lion
This article is about the aquatic mammal. For other uses, see Sea lion (disambiguation).

Sea lions are pinnipeds characterized by external ear-flaps, long fore-flippers, the ability to walk on all fours, and short thick hair. Together with the fur seal, they comprise the family Otariidae, or eared seals. There are six extant and one extinct species (the Japanese sea lion) in five genera. Their range extends from the subarctic to tropical waters of the global ocean in both the northern and southern hemispheres with the notable exception of the northern Atlantic Ocean.[1]. They have an average life span of 20-30 years. 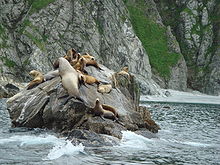 Steller sea lions haul out on a rock off the coast of Raspberry Island (Alaska).

Together with the fur seals, they constitute the Otariidae family, collectively known as eared seals. Until recently, sea lions were grouped under a single subfamily called Otariinae to distinguish them from the fur seals Arcocephalinae, based on the most prominent common feature between all species, namely the lack of the dense underfur characteristic of the latter. Recent genetic evidence, however, strongly suggests that Callorhinus, the genus of the Northern fur seal is more closely related to some sea lion species than to the other fur seal genus Arctocephalus.[2] Therefore the fur seal/sealion subfamily distinction has been eliminated from many taxonomies. Sea lions are related to the walrus and the seal. Nonetheless, all fur seals have certain features in common: the fur, generally smaller sizes, farther and longer foraging trips, smaller and more abundant prey items and greater sexual dimorphism. All sea lions have certain features in common, in particular their coarse, short fur, greater bulk and larger prey than fur seals. For these reasons, the distinction remains useful.

Some species of sea lion are readily trainable and are often a popular attraction at zoos and aquariums. The archetypal circus "seal" performing behaviors such as throwing and catching balls on its nose and clapping is almost always a sea lion.[citation needed]

Sea lions have been trained by the U.S. Navy's Marine Mammal Program, based in San Diego, to detain scuba divers.[3]

Sea lion attacks on humans are rare. In a highly unusual attack in 2007 in Western Australia a sea lion leapt from the water and seriously mauled a 13-year old girl surfing behind a speedboat. The sea lion appeared to be preparing for a second attack when the girl was rescued. An Australian marine biologist opined the sea lion may have viewed the girl "like a rag doll toy" to be played with.[4][5][6] In San Francisco where an increasingly large population of California sea lion crowds dock along San Francisco Bay, there have been incidents in recent years of swimmers being bitten on the leg by large aggressive males, possibly as a territorial act.[7][8][9]

The Moche people of ancient Peru worshipped the sea and its animals. They often depicted sea lions in their art.[10]

Sea lions have also been reported to assist or save humans who show signs of distress in the open waters. In June of 2000, Kevin Hines leaped into the San Francisco bay and it was reported that he was saved by a sea lion that kept him afloat and breathing till the paramedics arrived.[11]