The Moche civilization (alternatively, the Mochica culture, Early Chimu, Pre-Chimu, Proto-Chimu, etc.) flourished in northern Peru from about 100 AD to 800 AD, during the Regional Development Epoch. While this issue is the subject of some debate, many scholars contend that the Moche were not politically organized as a monolithic empire or state. Rather, they were likely a group of autonomous polities that shared a common elite culture, as seen in the rich iconography and monumental architecture that survive today. They are particularly noted for their elaborately painted ceramics, gold work, monumental constructions (huacas) and irrigation systems.[1] Moche history may be broadly divided into three periods – the emergence of the Moche culture in Early Moche (AD 100–300), its expansion and florescence during Middle Moche (AD 300–600), and the urban nucleation and subsequent collapse in Late Moche (AD 500–750).[2] Moche society was agriculturally based, with a significant level of investment in the construction of a network of irrigation canals for the diversion of river water to supply their crops. Their culture was sophisticated; and their artifacts express their lives, with detailed scenes of hunting, fishing, fighting, sacrifice, sexual encounters and elaborate ceremonies.

The Moche cultural sphere is centered around several valleys on the north coast of Peru – Lambayeque, Jequetepeque, Chicama, Moche, Virú, Chao, Santa, and Nepena. The Huaca del Sol, a pyramidal adobe structure on the Rio Moche, had been the largest pre-Columbian structure in Peru. However, it was partly destroyed when Spanish Conquistadores mined its graves for gold. Fortunately the nearby Huaca de la Luna has remained largely intact; it contains many colorful murals with complex iconography. It has been under archeological excavation since the early 1990s. Other major Moche sites include Sipan, Pampa Grande, Loma Negra, Dos Cabezas, Pacatnamu, San Jose de Moro, the El Brujo complex, Mocollope, Cerro Mayal, Galindo, Huanchaco, and Panamarca.

Moche pottery is some of the most varied in the world. The use of mold technology is evident. This would have enabled the mass production of certain forms. But Moche ceramics vary widely in shape and theme, with most important social activities documented in pottery, including war, sex, metalwork, and weaving.

Because irrigation was the source of wealth and foundation of the empire, the Moche culture emphasized the importance of circulation and flow. Expanding upon this, the Moche focused on the passage of fluids in their artwork, particularly life fluids through vulnerable human orifices. There are countless images of defeated warriors losing life fluids through their nose, or helpless victims getting their eyes torn out by birds or captors. Images of captive sex-slaves with gaping orifices and leaking fluids portray extreme exposure, humiliation, and a loss of power.

The coloration of Moche pottery is often simple, with yellowish cream and rich red used almost exclusively on elite pieces, with white and black used in only a few pieces. Their adobe buildings have been mostly destroyed by looters and natural forces over the last 1300 years, but the huacas that remain show that the coloring of their murals was very vibrant.

The realistic detail in Moche ceramics may have helped them serve as didactic models. Older generations could pass down general knowledge about reciprocity and incorporation to younger generations through such portrayals. The sex pots could teach about procreation, sexual pleasure, cultural and social norms, a sort of immortality, and transfer of life and souls, transformation, and the relationship between the two cyclical views of nature and life.

Moche wove textiles - mostly from wool from vicuña and alpaca. Although there are few surviving examples of this, descendants of the Moche people have strong weaving traditions. 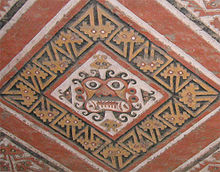 Both iconography and the finds of human skeletons in ritual contexts seem to indicate that human sacrifice played a significant part in Moche religious practices. These rites appear to have involved the elite as key actors in a spectacle of costumed participants, monumental settings and possibly the ritual consumption of blood. While some scholars, such as Christopher Donnan and Izumi Shimada, argue that the sacrificial victims were the losers of ritual battles among local elites, others, such as John Verano and Richard Sutter, suggest that the sacrificial victims were warriors captured in territorial battles between the Moche and other nearby societies. Excavations in plazas near Moche huacas have found groups of people sacrificed together and the skeletons of young men deliberately excarnated, perhaps for temple displays.[3]

The Moche may have also held and tortured the victims for several weeks before sacrificing them, with the intent of deliberately drawing blood. Verano believes that some parts of the victim may have been eaten as well in ritual cannibalism.[3] The sacrifices may have been associated with rites of ancestral renewal and agricultural fertility. Moche iconography features a figure which scholars have nicknamed the "Decapitator" or Ai Apaec; it is frequently depicted as a spider, but sometimes as a winged creature or a sea monster: together all three features symbolize land, water and air. When the body is included, the figure is usually shown with one arm holding a knife and another holding a severed head by the hair. The "Decapitator" is thought to have figured prominently in the beliefs surrounding the practice of sacrifice.

Ai Apaec has also been depicted as "a human figure with a tiger's mouth and snarling fangs".[4]

There are several theories as to what caused the demise of the Moche political structure. Some scholars have emphasised the role of environmental change. Studies of ice cores drilled from glaciers in the Andes reveal climatic events between 536 to 594 AD, possibly a super El Niño, that resulted in 30 years of intense rain and flooding followed by 30 years of drought, part of the aftermath of the climate changes of 535–536.[5] These weather events could have disrupted the Moche way of life and shattered their faith in their religion, which had promised stable weather through sacrifices.

But more recently discovered evidence demonstrates that these events did not cause the final Moche demise. Moche polities survived beyond 650 AD in the Jequetepeque Valley and the Moche Valleys. For instance, in the Jequetepeque Valley, later settlements are characterized by fortifications and defensive works. While there is no evidence of a foreign invasion, as many scholars have suggested in the past (i.e. a Huari invasion), the defensive works suggest social unrest, possibly the result of climatic changes, as factions fought for control over increasingly scarce resources.[6]

Links with other cultures

Chronologically, the Moche was an Early Intermediate Period culture, which was preceded by the Chavín horizon and succeeded by the Huari and Chimú. The Moche co-existed with the Ica-Nazca culture in the south. They are thought to have had some limited contact with the Ica-Nazca because they latter mined guano for fertilizer and may have traded with northerners. Moche pottery has been found near Ica, but no Ica-Nazca pottery has been found in Moche territory. The coastal Moche culture also co-existed (or overlapped in time) with the slightly earlier Recuay culture in the highlands. Some Moche iconographic motifs can be traced to Recuay design elements. 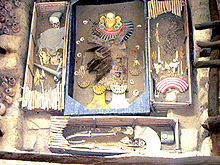 In 2005, a mummified Moche woman was discovered at the Huaca Cao Viejo, part of the El Brujo archeological site on the outskirts of present-day Trujillo, Peru. It is the best preserved Moche mummy found to date and the elaborate tomb that housed her had unprecedented decoration. The archaeologists on the site believe that the tomb had been undisturbed since approximately 450 AD. The tomb also contained various military and ornamental artifacts, including war clubs and spear throwers. A garroted young girl, probably a servant, was found in the tomb with the mummy of a probably elite woman. News of the discovery was announced by Peruvian and U.S. archaeologists in collaboration with National Geographic in May 2006.[7]

In 2006 perhaps the most lavish (certainly the most valuable, pound-for-pound) Moche artifact ever discovered turned up in a Londoner's office; it was a magnificent gold mask depicting a sea goddess, with beautiful spirals radiating from her stone-inlaid face. Experts thought that the artifact, nicknamed La Mina, may have been looted from a nobleman's tomb in the late 1980s ; it has now been returned to Peru.[8][9]