This article is about the Herpestidae family of mongoose. For the Malagasy mongoose, see Galidiinae. For other uses, see Mongoose (disambiguation).

Mongoose (Herpestidae) are a family of 33[2] living species of small carnivorans from southern Eurasia and mainland Africa. Four additional species from Madagascar in the subfamily Galidiinae, which were previously classified in this family, are also referred to as "mongooses" or "mongoose-like". Genetic evidence indicates that the Galidiinae are more closely related to other Madagascar carnivorans in the family Eupleridae, which is the closest living group to the true mongooses.

The word mongoose is derived from the Marathi name mangus (मंगूस) (pronounced as [məŋɡuːs]), perhaps ultimately from Dravidian (cf. Telugu mungeesa (ముంగిస), Kannada mungisi (ಮುಂಗಿಸಿ). The form of the English name (since 1698) was altered to its -goose ending by folk-etymology. It has no etymological connection with the word goose. The plural form is mongooses,[3] or, rarely, mongeese.[4] It has also been spelled mungoose.[5]

Mongooses live in southern Asia, Africa, and southern Europe, as well as some Caribbean and Hawaiian islands, where they are an introduced species.

Some species lead predominantly solitary lives, seeking out food only for themselves, while others travel in groups, sharing food among group members.

. Mongooses also have receptors for acetylcholine that, like the receptors in snakes, are shaped so that it is impossible for snake neurotoxin venom to attach to them. Researchers are investigating whether similar mechanisms protect the mongoose from hemotoxic snake venoms.[6]

The mongoose has a very similar appearance to the weasel, despite not being closely related. Their long sleek bodies and short fur fit them for similar ecological niches. They live in similar climates and both burrow underground. Like weasels, mongooses also have short legs and tails.

In contrast to the arboreal, nocturnal viverrids, mongooses are more commonly terrestrial and many are active during the day.

The Egyptian Mongoose (Herpestes ichneumon) is sometimes held as an example of a solitary mongoose, though it has been observed to work in groups.[7]

The Meerkat or Suricate (Suricata suricatta), a smaller species, lives in troops of 20 to 30 consisting of an alpha male and female, usually together with their siblings and offspring, in open country in Southern Africa (Angola, Namibia, Botswana, South Africa). The Meerkat is a small, diurnal mammal that forages for invertebrates in open country. Its behavior and small size (it weighs less than 2 pounds (0.91 kg) make it vulnerable to larger carnivores and birds of prey. However, it eats small, migrating birds.

To protect the foraging troops from predators, one Meerkat serves as a sentinel that climbs to a vantage point and watches for danger. If the sentinel detects a predator it gives a loud alarm to warn the troop and indicate whether the threat comes from the air or the ground. If from the air, the meerkats rush to the nearest hole. If from the ground, the troop flees, but they are more able to evade terrestrial predators than raptors.

The Indian Mongoose and others are well-known for their ability to fight and kill venomous snakes, particularly cobras. They are adept at such tasks due to their agility, thick coat, and mutated acetylcholine receptors, which render them resistant or immune to snake venom.[8] They typically avoid the cobra and have no particular affinity for consuming its meat.[9]

Some species can learn simple tricks. They can be domesticated and are kept as pets to control vermin. However, they can be more destructive than desired: when imported into the West Indies to kill rats and snakes, they destroyed most of the small, ground-based fauna. For this reason, it is illegal to import most species of mongoose into the United States,[10] Australia, and other countries. Mongooses were introduced to Hawaii in 1883, and have had a significant negative effect on native species.[11]

The mongoose emits a high-pitched noise, commonly known as giggling, when it mates. Giggling is also heard during courtship.[12]

Mongooses are a common spectacle at roadside shows in Pakistan. Snake charmers keep mongooses for mock fights with snakes. In Okinawa, mongooses fight habu, or vipers (a local, venomous member of the Trimeresurus species), in a closed perimeter while spectators watch. However, due to pressure from animal rights activists, the spectacle is less common today.

According to Greek historian Diodorus Siculus (1.35 & 1.87), Egyptians venerated native mongooses (Herpestes ichneumon) for their ability to handle venomous snakes and for their occasional diet of crocodile eggs.

The Buddhist god of wealth Vaiśravaṇa, or Dzambala for Tibetans, is frequently depicted holding a mongoose that is spitting jewels from its mouth.

Rudyard Kipling's story "Rikki-Tikki-Tavi" features a pet mongoose that saves its human family from two deadly cobras. The story was later made into several films.

A mongoose also features in Bram Stoker's novel, The Lair of the White Worm. The main character, Adam Salton, purchases one to independently hunt snakes.

Mongooses were used in research into creating artificial skin. Mongooses were given grafts of a polytetrafluoroethylene-based polymer in an attempt to create a semi-permeable skin-like membrane which could be used to treat burn victims. 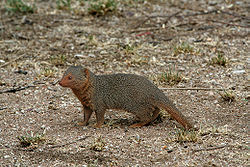 Like other feliformian carnivorans, mongooses descended from the viverravines, which were civet- or genet–like mammals. Older classifications sometimes placed mongooses in the Viverridae family, but both morphological and molecular evidence speaks against the monophyly of this group, though they do have the same basic dental formula as the viverrids. Mongooses also have characteristic behavioral features that distinguish them from viverrids and other feliformian families. Less diverse than the viverrids, the mongoose family includes 14 genera and 33 species.

The Helogale pervula (common dwarf mongoose) is closely related to the family Hyaenidae (hyenas), Viverridae (civets) and Felidae (cats). The species that come from their common ancestor also relate them more closely to canines than to the family Mustelidae, which contains weasels, badgers and otters.

Genetic evidence indicates that the family Eupleridae, is the closest living group to mongooses. Eupleridae contains the species Fossa.

Genetic evidence from several nuclear and mitochondrial genes argues against placing Malagasy Galidiinae in the mongoose family; instead, these species are more closely related to other Madagascar carnivorans, including the Fossa and Malagasy civet.[13][14] As a result, this subfamily was moved out of Herpestidae and re-located to Eupleridae.