It was one of the first museums in the world to make its entire 45,000 piece collection available in an online electronic catalog. 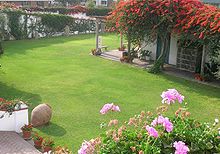 During that same year, Larco Hoyle received some advice from his uncle, Victor Larco Herrera, a founder of the first museum in Lima. He urged Larco Hoyle to form a new museum in Lima, one that could guard all the archaeological relics that were continually being extracted by clandestine excavators.

Larco Hoyle agreed with his uncle and proceeded to create a museum that would carry on his father's legacy. Larco Hoyle purchased two large collections: 8,000 pieces from Roa and 6,000 pieces from Carranza. He also purchased several small collections in Chicama Valley, Trujillo, Virú, and Chimbote. Within a year, the collection had grown significantly and display cases were installed in a small house on the Chiclín estate. On July 28, 1926, Independence Day, the museum opened its doors to the public.

The Larco Museum now lends some of its collection to its daughter museum, the Museo de Arte Precolombino (Pre-Columbian Art Museum), located in Cusco, Peru. 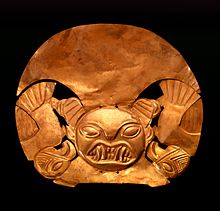 Mochica Headdress from the Gold and Silver Gallery

The Cultures Gallery exhibits 40,000 years of Peruvian pre-Columbian history. This chronology-based gallery provides visitors with a comprehensive view of cultures that existed in pre-Columbian Peru through the extant indigenous art that has survived since the 16th century Spanish conquest. This hall is divided into four areas: North Coast, Center, South and cultures from the highlands. Showcases have been ordered according to cultural sequence:

Other galleries include the Lithic, Vault, Ceramics, Metals, Textiles and Storage in which visitors have the opportunity to view the Museum's entire collection of classified archaeological objects.

In addition to its permanent exhibits, the Larco Museum lends its collections to several museums and cultural centers around the world. Currently, there are traveling exhibits in Tokyo, Japan and Budapest, Hungary. 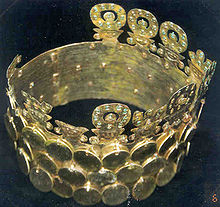 Other points of interest

The Museum Café is a restaurant located in the terrace and garden of the museum. Its interior, designed by architect Jordi Puig, provides the ambiance of an old chateau.

The Museum Gallery Shop has a wide variety of ceramic, metal and textile reproductions made by skilled craftsmen from all over Peru. The museum has formalized the reproduction techniques for these pre-Columbian artifacts and assesses each piece to ensure quality.

HStern Jewellers and Kuna by Alpaca 111 also have storefronts at the Museum. The Museum also features gardens that have received a Colonial Garden award from Peru.