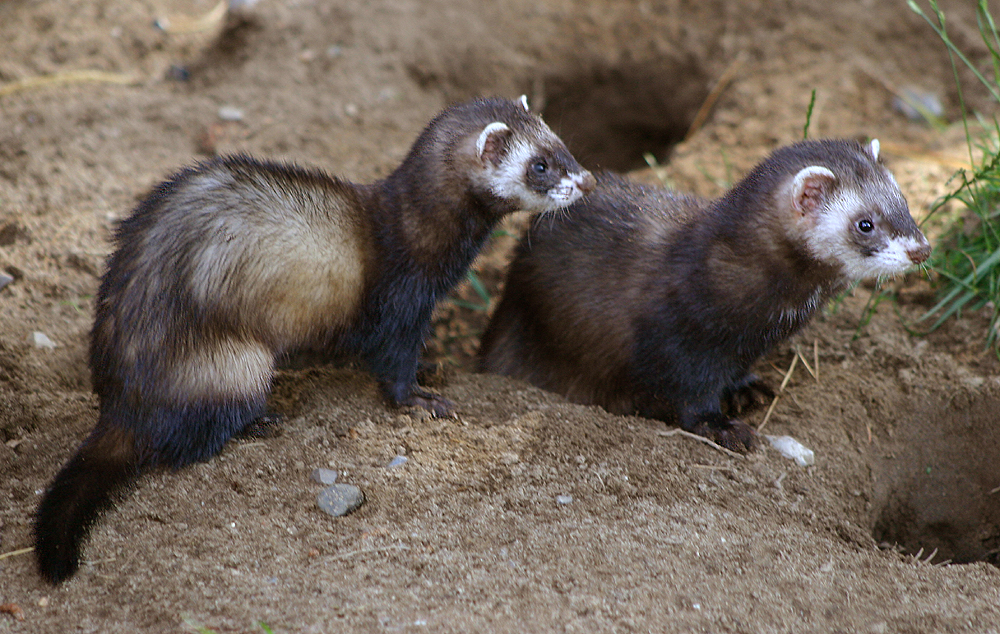 image_caption = European Polecats
regnum = ia
phylum = Chordata
classis = ia
ordo =
familia =
genus = ""
species = "M. putorius"
binomial = "Mustela putorius"
binomial_authority = (Linnaeus, )The European Polecat ("Mustela putorius"), also known as a fitch, is a member of the family, and is related to the s, s, s and s. Polecats are dark brown with a lighter bandit-like mask across the face, pale yellow underbody fur, a long tail and short legs. They are somewhat larger than weasels, weighing between 0.7 kg for females to 1.7 kg for males, but smaller than otters.

Polecats are found throughout Europe. [Mapmaker at european-mammals.org, accessed November 2007 [http://www.european-mammals.org/php/mapmaker.php] ] They are mainly nocturnal and are found in woodlands, farmlands and wetlands. They often make dens in stream banks or under tree roots. Almost entirely carnivorous, they feed largely on small mammals such as and and, seasonally, on and . Small birds and insects are a much smaller component of their diet. [Lodé, T. (2000) Functional response and area-restricted search in a predator: seasonal exploitation of anurans by the European polecat, Mustela putorius Austral Ecology 25 (3), 223–231.] They require a home range of about a square kilometer. The pattern of polecat predation on frogs was found to be sex selective and predation by polecats is found to influence sex ratio, male abundance and sexual conflict in a frog mating system, restricting the opportunity for multiple mating. [Lodé, T., Hovleck, M.J., LesBarreres, D. & Pagano, A. (2004). Sex-biased predation by polecats influences the mating system of frogs. "Proceedings of the Royal Society of London, (suppl.), Biology Letters": 271 (S6): S399-S401]

Though polecats are chiefly , females can be . The of the mating system can change with environmental conditions. Sexual conflict may result in , in which one sex evolves a "manipulative" character which is countered by a "resistance" trait in the other sex.

Polecats (mainly dark phenotype) are able to hybridise with the rare and have fertile hybrids. [Lodé T., Guiral G. & Peltier D. (2005) European mink-polecat hybridisation events: hazards from natural process ? "Journal of Heredity" 96 (2): 1-8 ] In some parts of England the abandoning of domestic s has led to ferret-polecat hybrids living in the wild. Often hybrids have a less distinct facial mask, light throat patches and lighter fur especially on the undersides. However there are some hybrids that are almost indistinguishable from pure polecats.

The native polecat has made a recovery across much of central and southern England thanks in part to reintroduction programmes. Recent DNA studies have shown that the pure native polecats have become firmly reestablished and are not becoming greatly hybridised. [Vincent Wildlife Trust/The Mammal Society Polecat Survey 2004-2006] It has been suggested that the hybrid animals containing domesticated ferret genes are less well adapted to life in the wild than native polecats as the hybrids tend to be distributed near or beyond the main polecat range.

Other species of polecat include the ("M. eversmanni") and the ("M. lutreola"). Most zoologists believe that the domestic ("M. putorius furo") is descended from the European Polecat, or possibly from a hybrid of the European and steppe varieties. The , also called the striped polecat ("Ictonyx striatus"), lives in subsaharan Africa.